Architectural Cubism is a purely Czech phenomenon. It was the promoted by the members of the Group of Fine Artists, founded in Prague in 1911. The most important architects of the group were Pavel Janák, Josef Gočár, Josef Chochol and Vlastislav Hofman. Janák formulated the theoretical basis for the style in architecture. Most of the Cubist structures were built between 1912 and 1914 in Prague and elsewhere. The second wave of construction followed World War I.

Cubist architecture is characterised by the use of hard geometrical, often crystalline, shapes and ornaments, such as triangles, pyramids, cubes and prisms. The Cubists believed that objects had their own inner energy, which could be released by splitting or slicing horizontal and vertical surfaces. This can be seen mostly in the outer appearance of buildings, especially in the design of windows and doors. It did not have much effect on the ground plan of the buildings, but was used as a decorative style in the interiors, most notably in vestibules and staircases.

Cubism was also in interaction with other contemporary styles. There are many examples of buildings that show Cubist details in the general Art Nouveau framework. Sometimes Cubist architects combined the fragmentation of form with the subjectivism and dramatism of Expressionism. After World War I it is often difficult to draw a clear line between Cubism and Art Deco.

After the war, when Czechoslovakia gained its independence, Cubism developed into a style that was very different from what it was originally. Although it was promoted by the same architects, the main concern was no longer about the plastic modelling of the surfaces. Instead, façades were covered with colourful ornaments, which were often of semicircular or cylindrical shape, giving the style the name of Rondocubism. We can also see the reappearance of figurative images on the façades in this period. Unlike the pre-war Cubism, which was a specifically created intellectual movement, the new style had a popular nature and nationalist undertones, which is why it is often called the National Style. All these buildings are generally described under the umbrella term of Art Deco. The style was dominant in the 1920s, until it gradually faded away in favour of Functionalism.

My portfolio contains photos of and information about 22 Cubist and 15 Art Deco structures in Prague. It includes all the important Cubist buildings in the city, such as the House of the Black Madonna, the Hodek Apartment Building and the Diamond House, as well as some of the most notable Art Deco structures, like the Czechoslovak Legio Bank Building and the Adria Palace.

As for Cubism, my main guide was the book Czech Architectural Cubism by Zdeněk Lukeš and Ester Havlová (Prague: Jaroslav Fragner Gallery, 2006). I took most photos in January and February 2020 and the rest in October and November 2015.

You will find the locations of the buildings on this map:

1. House of the Black Madonna

The House of the Black Madonna is the first and the most famous example of Cubist architecture in Prague. It got its name from a statue rescued from a Baroque building located on the same lot before. 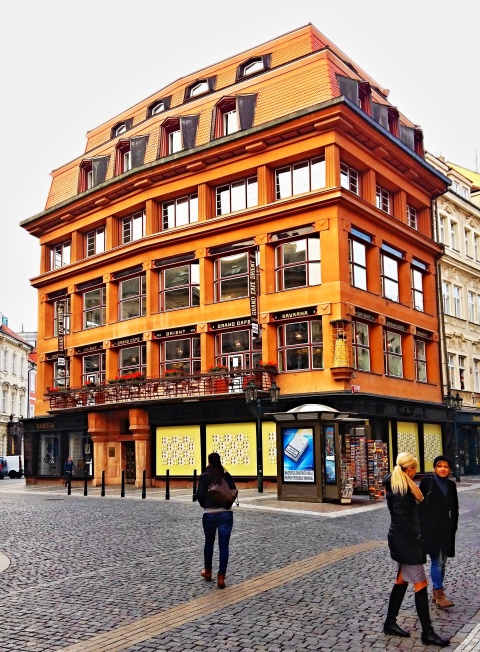 Cubism is best expressed in the design of the main entrance, the railing of the first-floor balcony, the windows and pilaster capitals of the first and second floors, and the dormer windows. Although a modern structure, it fits in well in its Baroque surroundings. 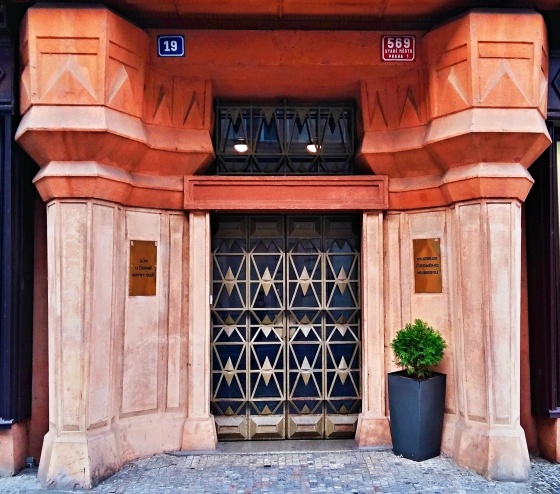 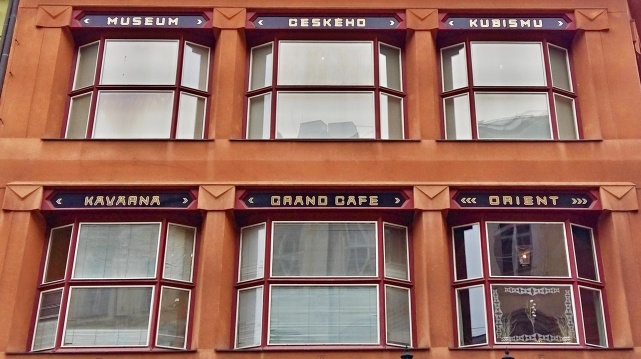 Josef Gočár designed the building as a department store for the wholesale merchant František Josef Herbst. Herbst’s store occupied the ground and second floors, on the first floor was the Grand Café Orient, and above there were apartments. The floors are connected by an impressive staircase (note the shape of the railing). 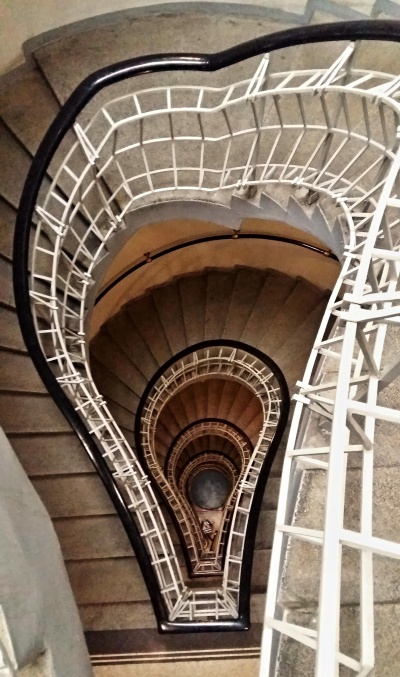 The building has a reinforced-concrete skeleton, a miracle of engineering of the time, which allowed for large interior spaces without pillar support. This was better suited to Cubist aesthetics and is best exemplified by the Grand Café Orient, which is the only surviving Cubist interior in the world. 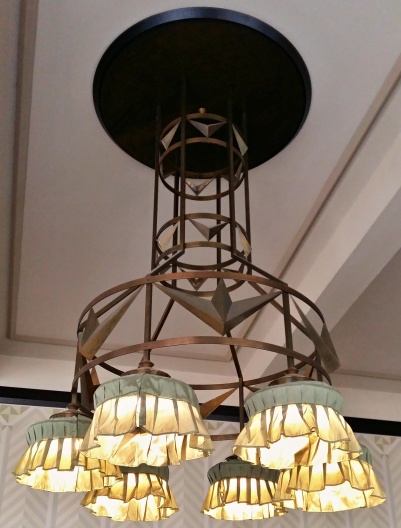 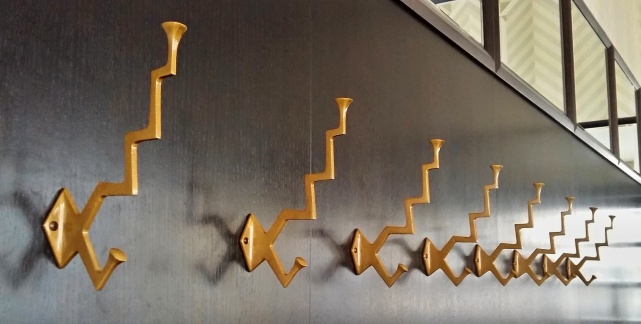 Today the House of the Black Madonna is home to the Museum of Czech Cubism. A branch of the Museum of Decorative Arts, it displays numerous pieces of Cubist furniture and objects of dining and interior design. Most of these were produced by the Prague Art Workshops, a company established by Janák and Gočár. Others were made at the Artěl art studio. Some examples are shown below.

The armchairs designed by Josef Chochol for the English Club at the Municipal House in Prague are an early example of the Gothic inspiration in Cubism. They are reminischent of Gothic cathedral chairs.

Table and upholstered armchairs from the set of furniture for the English Club at the Municipal House in Prague (Josef Chochol, 1910-1911) 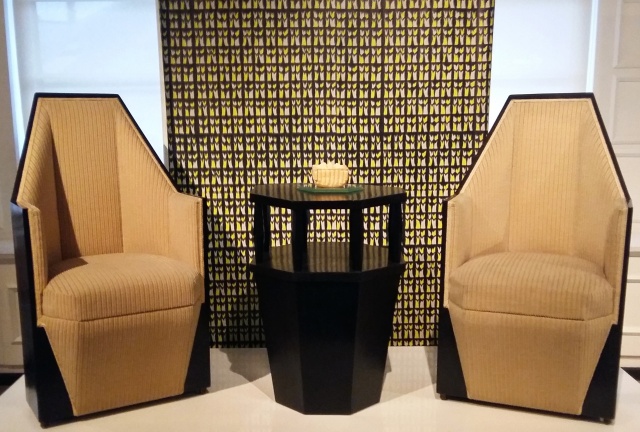 The first ever Cubist building – the Jakubec House in Jičín – was the work of Pavel Janák. He also designed its interior, the most radical part of it being the furniture of the ladies’ sitting room. The chest of drawers shows some inspiration from Baroque.

Chest of drawers and table mirror from the set of furniture of the sitting room of Růžena Jakubcová, Jakubec House, Jičín (Pavel Janák, 1911-1912) 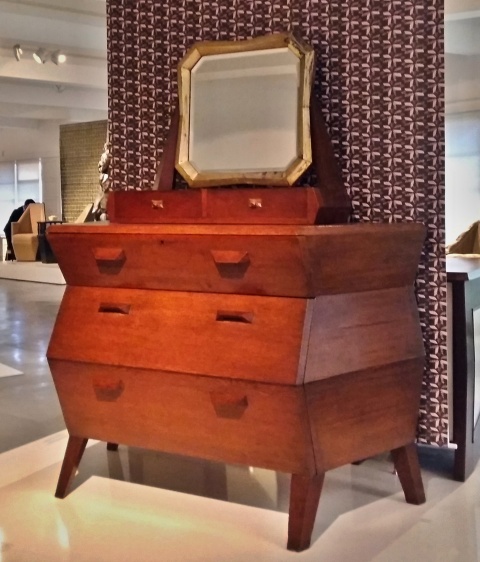 Another early Cubist work by Janák was the furniture set designed for the Borovička family. The most notable parts of it are the chairs and armchairs, which show how far the construction possibilities can be pushed while still taking into account the functionality. 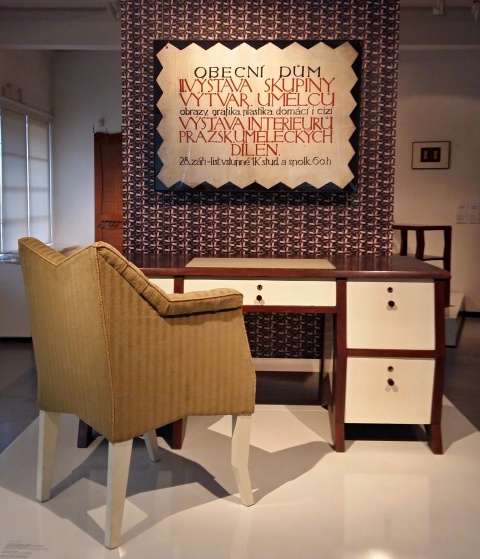 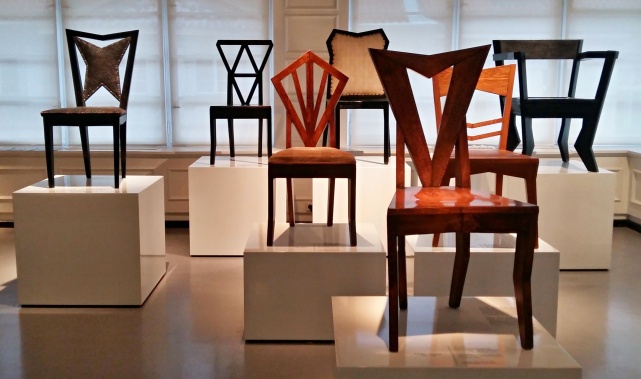 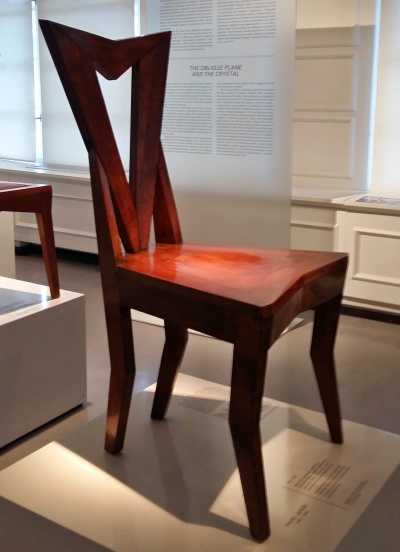 Janák was also an author of a number of ceramic boxes. These show influence from the 19th-century Japanese porcelain art and are today considered as icons of Cubist design.

Ceramic boxes displayed in a bookcase from a set of furniture for a study (Pavel Janák, 1912-1914) 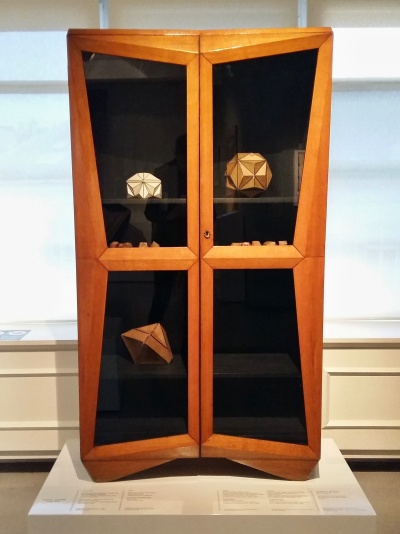 Janák also designed furniture for artists such as Pravoslav Kotík and Vojta Novák.

Coffee table and upholstered chairs from a set of furniture for Pravoslav Kotík
(Pavel Janák, 1912-1914) 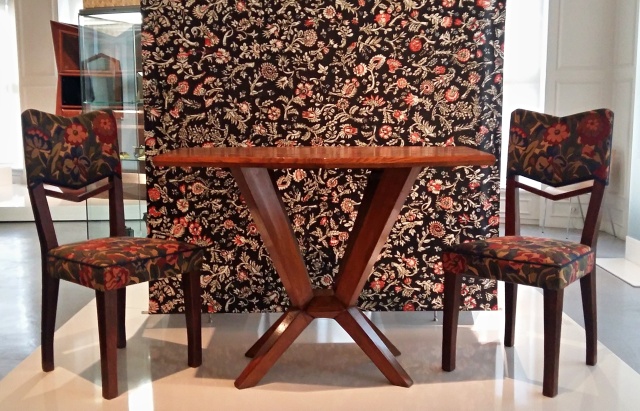 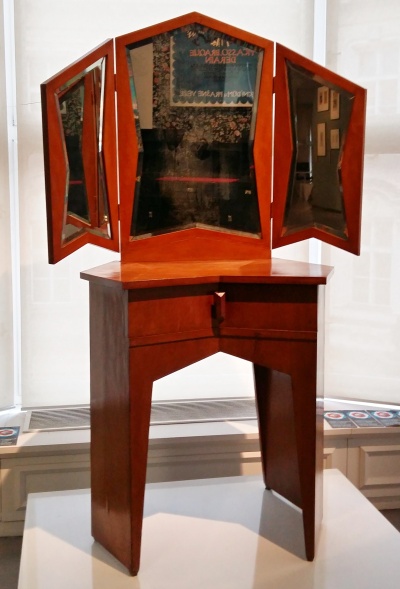 The museum also exhibits a number of designs by Josef Gočár. The most outstanding of them is the set of furniture designed for Otto Boleška. It is faithful to the principles of Cubism but still remains functional. Gočár emphasised the contrast between the broken lines of the tops and sides and the simple vertical fronts and backs. Further contrast is provided by the use of black stained oak and the floral patterning of the upholstery.

Upholstered sofa from the set of furniture for Otto Boleška (Josef Gočár, 1913) 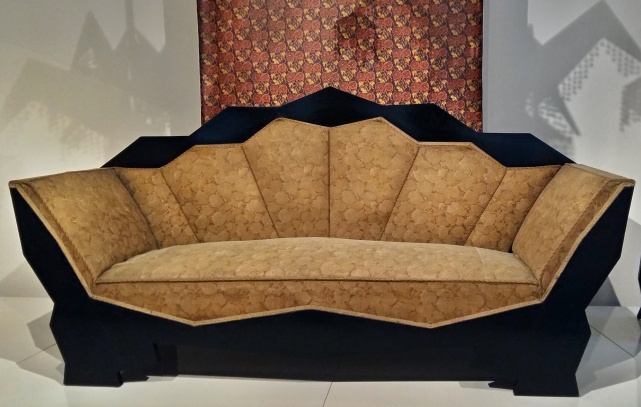 Armchair from the set of furniture for Otto Boleška (Josef Gočár, 1913) 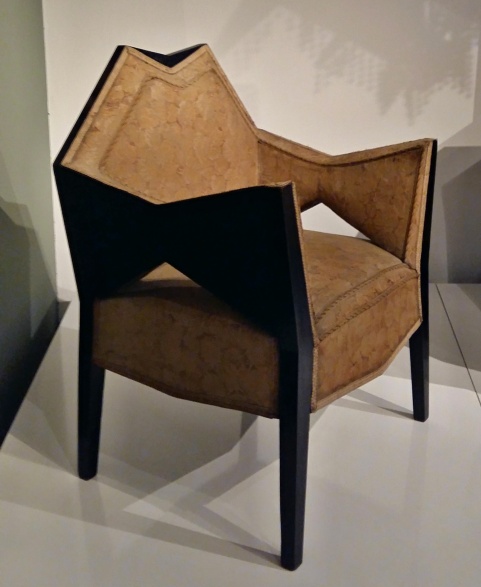 Chandelier from the set of furniture for Otto Boleška (Josef Gočár, 1913 or 1919) 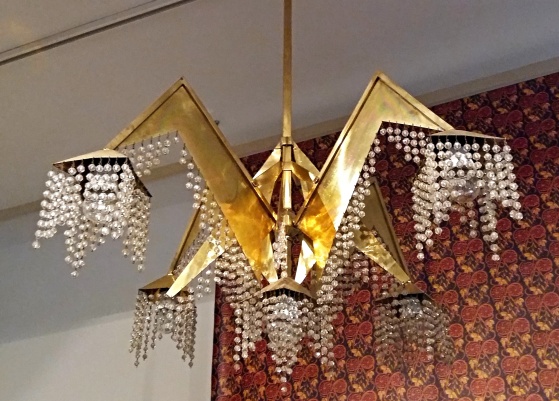 Writing desk from a set of furniture for the study of Václav Vilém Štech (Josef Gočár, 1913-1914) 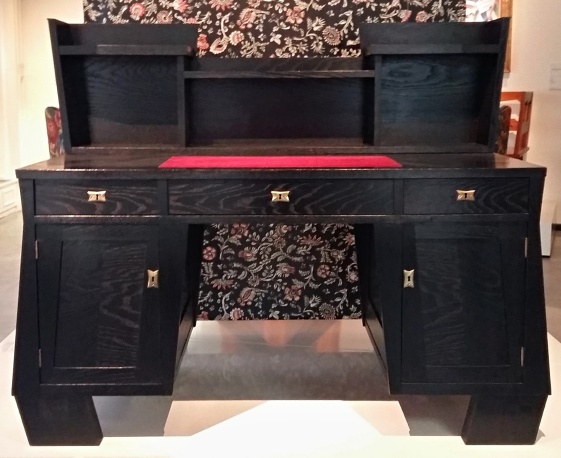 The furniture for Gočár’s own dining room is my favourite among the exhibits of the museum. 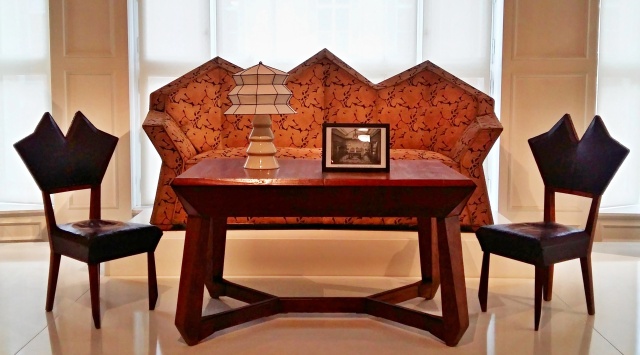 The museum also displays a Rondocubist armchair and liquour table by Gočár.

Upholstered armchair and liquour table from a set of furniture (Josef Gočár, c. 1922) 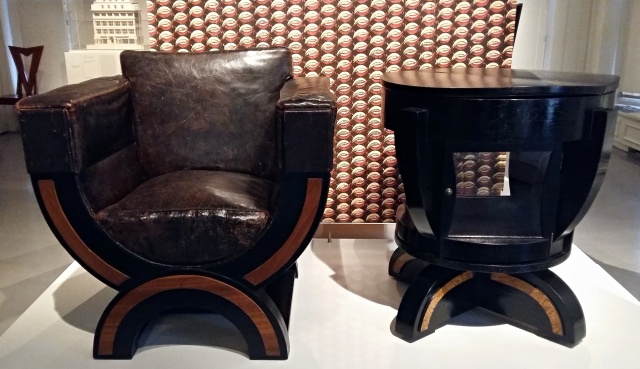