In the 18th century, an industrial suburb developed to the east of the Timişoara Fortress. It was known as Fabrikstadt in German, Gyárváros in Hungarian, and Fabric in Romanian, after numerous factories that operated here, along with mills, workshops and guilds. It experienced a continuous growth and was soon the busiest part of the city, with more than a half of its civilian population living here in the mid-19th century. It was also the most multicultural suburb of Timişoara, home to Germans, Hungarians, Romanians, Serbs, Czechs, Jews and Romani, together with French, Italians, Spaniards, Greeks and Armenians.

At the beginning of the 20th century, the area was thoroughly restructured, connections to the city center were improved, and many new buildings were erected. Two major arteries of the district – the 3 August 1919 Boulevard and the Dacians’ Street – offer many good examples of the architecture of the period, including Secession.

The Anheuer Palace is one of the oldest Art Nouveau buildings in Fabric. Its façade has female figures with lyres and plant ornaments on the second-floor level. 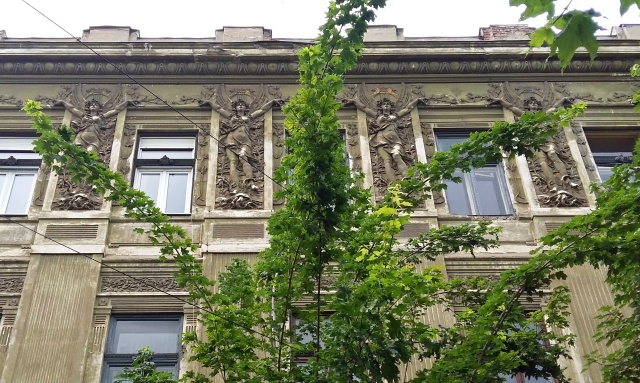 This is another early example of Art Nouveau in Fabric. The building has an effective corner solution, where rhythm is created by engaged columns with mascarons. Other mascarons can be spotted on the corbels supporting the balcony above the entrance on the side of the 3 August 1919 Boulevard. There are many stylised plant ornaments all over the façades. 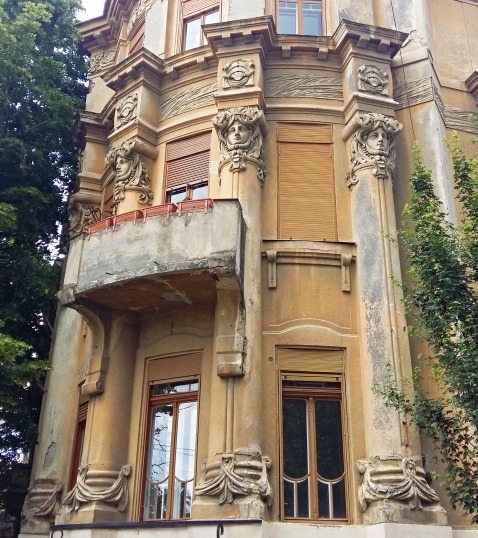 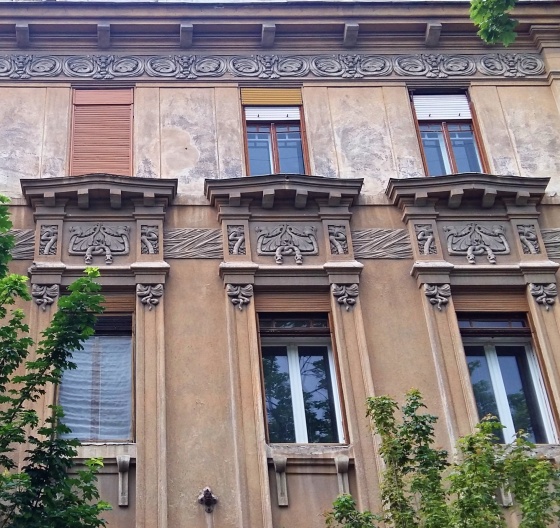 Old photographs show some features that have gone missing over the years, such as the monumental sculpture of a lion over the corner.

This palace is located on the northern side of the Trajan Square, the most suggestive of the old squares of Timişoara. It may have been designed by Lipót Baumhorn. The façade is adorned with mascarons and plant ornaments. The corner is crowned by a statue of Mercury, a copy of a work of Giambologna, which explains its more common name – the Mercur Palace. 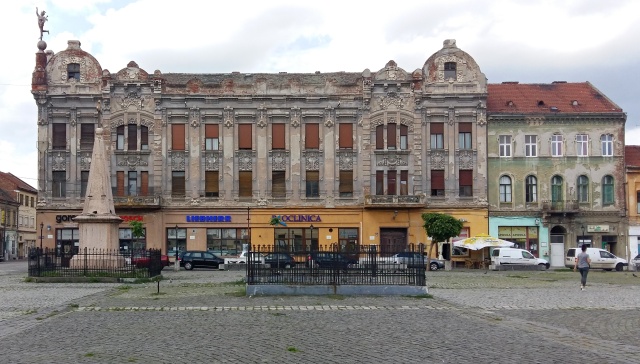 This is a huge structure with decorative elements inspired by various historical styles and Art Nouveau. Its original purpose was a municipal apartment building. It also housed a club and, during World War I, two schools. After the war the building moved to the ownership of the Belgian consul, and it came to be named after him and his wife – Totis Palace and Ștefania Palace. 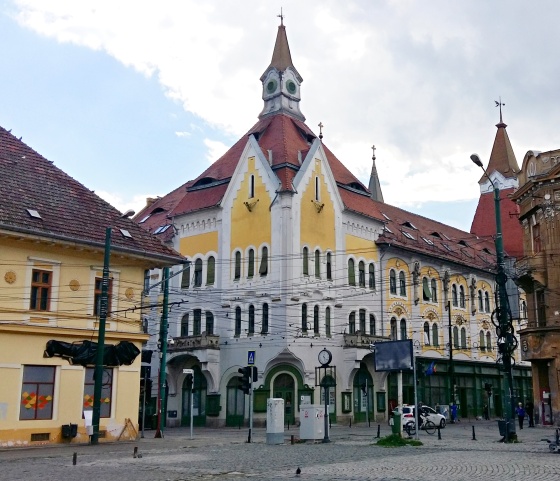 Many people call the building after the statues of monkies that can be seen on one of its three façades. 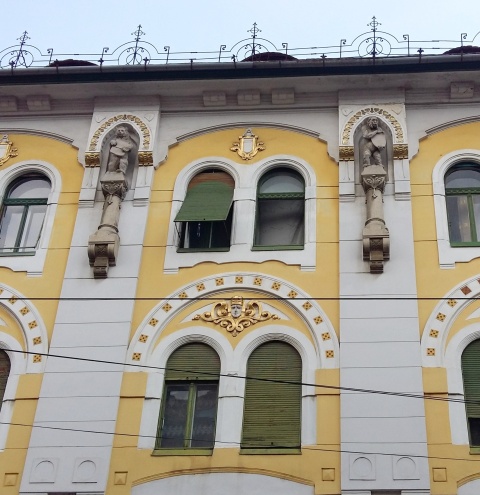 The history of this building goes back to the 1870s, when the Holy Trinity Pharmacy was established on this spot. The pharmacy changed ownership multiple times until it was bought by Anton Nägele, who built the current Secessionist structure. It is an attractive building with a corner tower and simple façades. The tower is crowned by what is supposed to be the Rod of Asclepius, although the presence of two coiled snakes indicates a confusion with the caduceus. 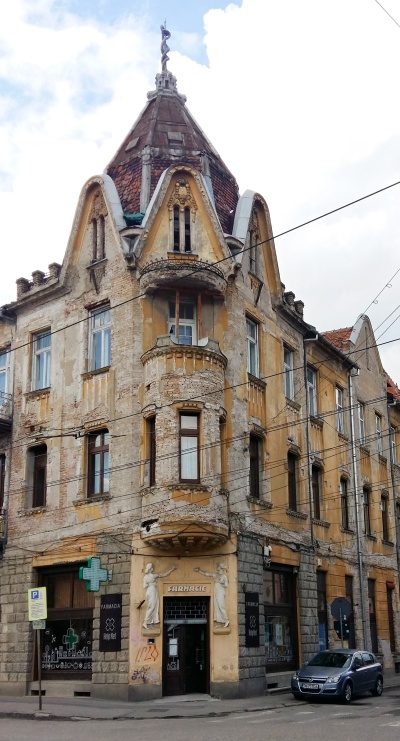 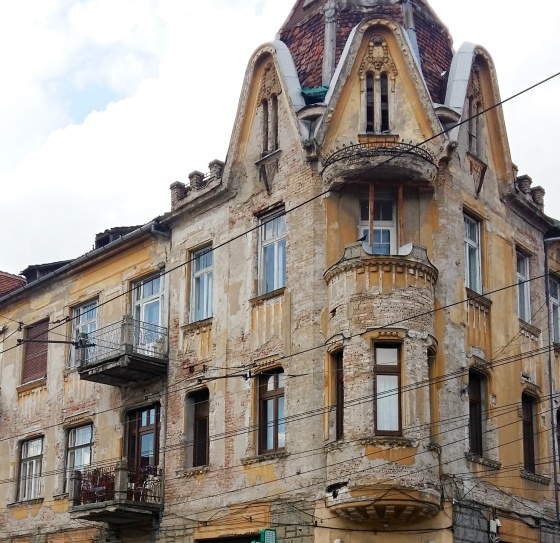 The entrance to the pharmacy is at the corner, marked by two bas-reliefs representing female figures with mortars. 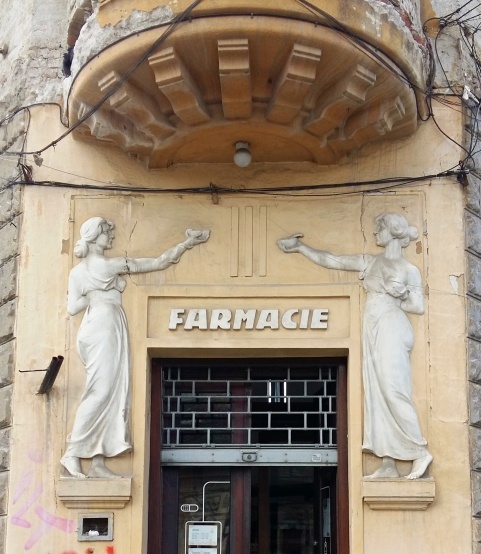 In 1917 Nägele sold the building to Aladár Kovács, which is why it is also often called the Kovács Palace.

This imposing structure, located on the eastern bank of the Bega at the entrance to Fabric, was built as a bathhouse, to replace old Turkish hammam of the district. Its style is a combination of the Viennese and Hungarian versions of Secession. The façades are adorned with geometric and floral motifs and the roof is high and with complex volumes. The cupola at the corner is said to have been inspired by the golden dome of the Kirche am Steinhof by Otto Wagner. On the pediment under the cupola there are the initials of László Székely, who was not only the architect but also the first owner of the building. 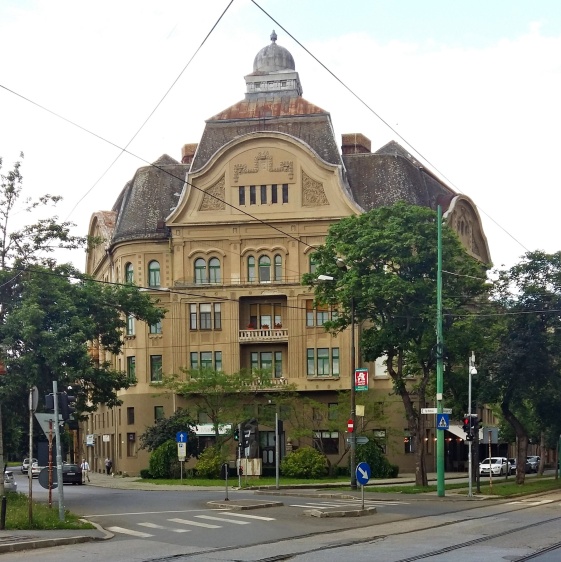 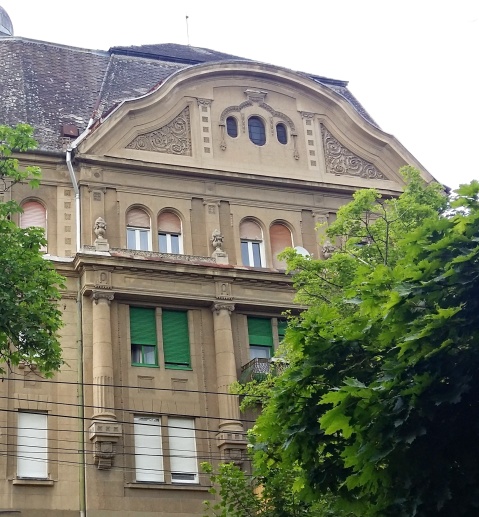 Originally known as the Hungária Baths, the structure got the name of the Neptun Baths in 1919. Today, a restaurant operates in the former swimming hall. The rest of the building has been divided into apartments and offices.

At the beginning of the 20th century connections between the Cetate and Fabric districts were improved. This included the demolition of the old wooden and iron bridges across the Bega and the construction of bridges made of reinforced concrete. One of these bridges was located in the vicinity of the City Park (now the Queen Marie Park) and was known as the Park Avenue Bridge.

The engineer of the bridge was Győző Mihailich, a Banat-born expert of reinforced concrete. The author of its Art Nouveau design was Albert Kálmán Kőrössy, who is the architect of several notable buildings in Budapest. At the time of its contruction it was the largest reinforced concrete beam bridge in Europe, and its technical qualities were praised internationally. 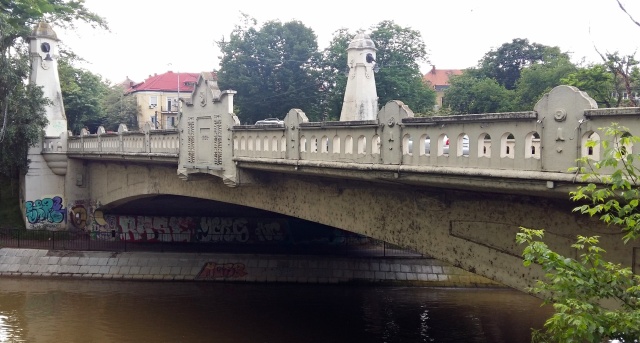 Since the end of World War II it is known as the Decebal Bridge, after the 1st-2nd-century Dacian king.

In the first decade of the 20th century the city of Timişoara carried out a project to suppress the old water channels of Fabric and built a hydropower plant to use more effectively the hydraulic power of the Bega. Its architect was László Székely, who used the elements of both the Viennese and Hungarian variants of Art Nouveau in its design. It is a beautiful structure with a tower. Large unadorned surfaces are interrupted by occasional ornaments. 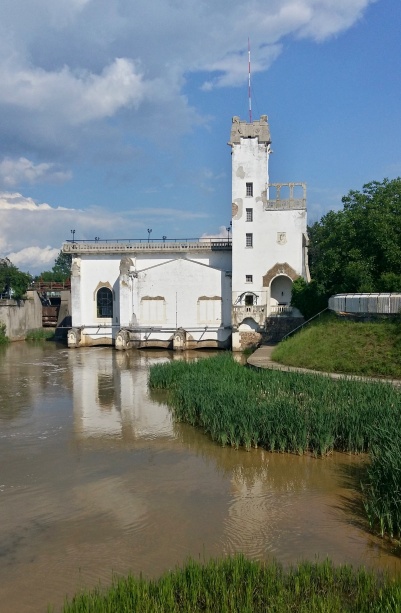 The plant produced the vast majority of Timişoara’s electrical energy after its construction and is used for the same purpose today.