This building, located at a busy traffic junction in one of the least attractive parts of Tel Aviv, is probably the most iconic International Style building in the city. It is often called the ‘Ship House’, because of its peculiar corner, high and narrow, with rounded balconies. The building defied the city planning laws of the 1930s as it contained six storeys – a basement, four floors and an attic – instead of the allowed three. In the 1940s the Haganah used its attic as a look-out point. Later the building also housed a synagogue. 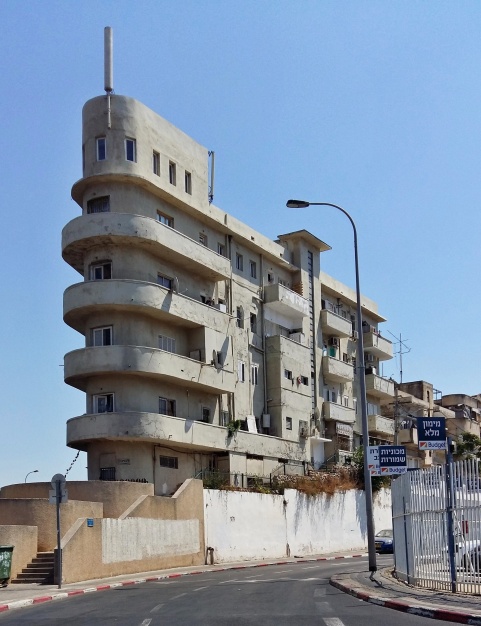 This house on Bialik Square was built for Shlomo Yafe, an engineer and agronomist, one of the initiators of the Levant Fair. It was designed by Salomon Gepstein, whose other works include the buildings on Rothschild Boulevard 61 and Yehuda HaLevi Street 14. It is unique for its deep balconies, each supported by a square made of vertical pillars and horizontal beams. 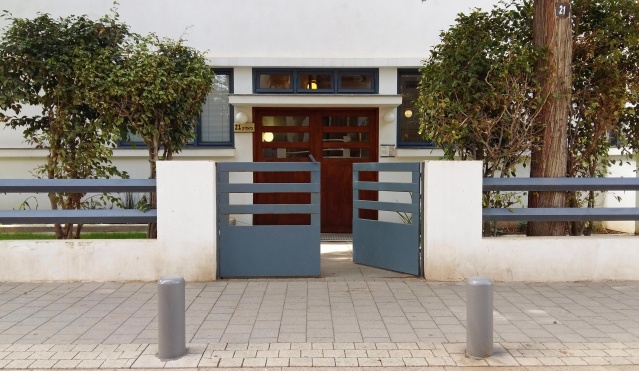 In the 1990s, the building was totally black and in a bad state, except for the ground floor, which housed a dentist’s office. Businessman Ronald Lauder bought it in 1999 and had it restored. Today, the Bauhaus Museum of Tel Aviv operates on its ground floor, displaying furniture and objects designed by Walter Gropius, Ludwig Mies van der Rohe, Marcel Breuer, and others. 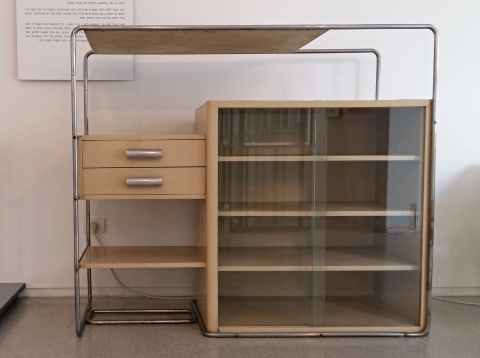 This building, the most extravagant on Bialik Street, is also referred to as the Pelzmann or Feldmann House in different online sources. Its horizontal aspect is accentuated by the semicircular and curved lines of the balconies.

Arieh Sharon was one of the most influential Israeli architects of the 20th century, and his workers’ residences on Frishman Street are among his most important works. All the three buildings consist of wings of housing units placed around a central courtyard. Common spaces include a dining room, a laundry, a kindergarten, a shop,a clinic, a reading room, and a synagogue. The rooms in the apartments are carefully arranged following the orientation to the sun and the winds. Sharon is thought to have been inspired by the Bauhaus dormitories in Dessau, designed by Walter Gropius.

This building, located on the busy Magen David Square, is a work of the architects who also designed the Recanati House around the same time. It is one of the few structures with a cylindrical corner solution in Tel Aviv. The building originally housed shops and offices. It was recently restored, and the interiors were designed by Karim Rashid. It now operates as a hotel.

This is one of the most remarkable buildings from the 1930s in Tel Aviv. It is perfectly symmetrical, contrary to the most International Style buildings in the city. Dynamism is provided by the round balconies and windows of the side wings. The building was restored in 2012. It was then that the nine-floor extension made of metal and glass was added to the back of the original building. The penthouse of the new structure is the most expensive in Israel. 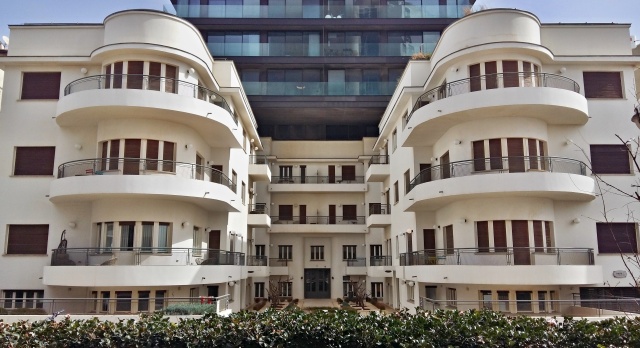 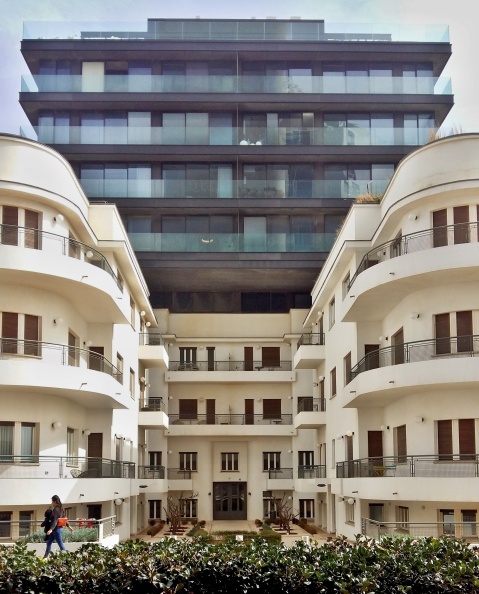 This is an important work of Dov Karmi from the 1930s. The façades are minimalistic, emphasising the simple cubic geometry. Notable elements include the pillars raising the entrance and the small round ventilation openings of the balconies. The architect himself resided in the building.

In 2002, two new floors were added, set back from the original façade and covered by awnings made of white-painted concrete beams and wooden planks.

Notable elements here include the rounded corner, the protruding stairwell with windows of Art Deco inspiration, the curvilinear balconies in the style of Erich Mendelsohn, the washed plaster of the façade, and, on the inside, the windows set above the doors. 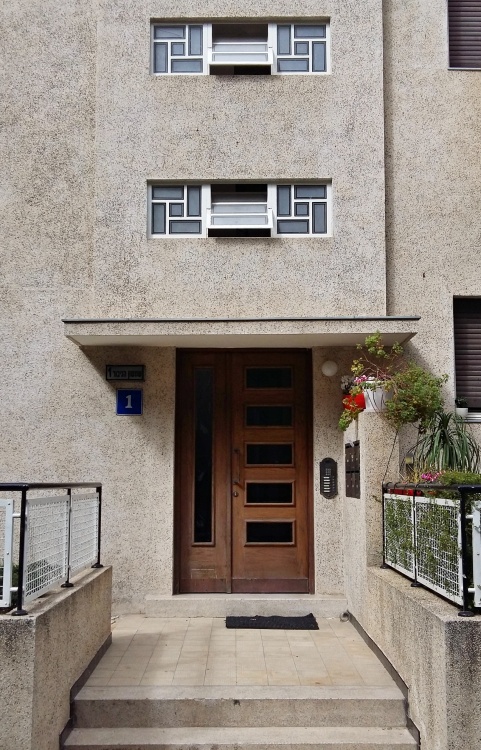 This structure was designed as a residential building with shops on the ground floor. Its most striking feature is the repetition of rounded balconies and equally rounded awnings on the long Menachem Begin Road façade. This contrasts with the short Mazeh Street façade, where the balconies and awnings are square and stand further apart from each other. The building is located on a trapezoid plot of land and has a courtyard in the back. 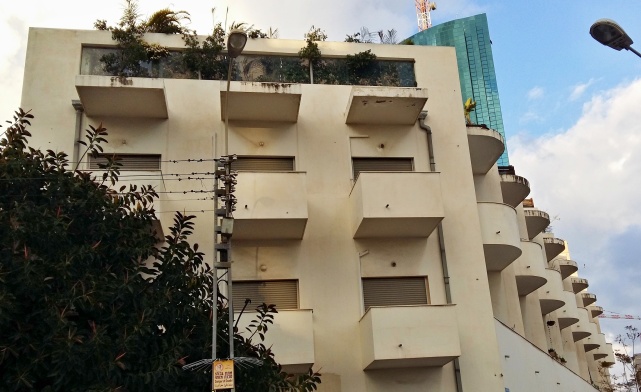 The monolithic central volume stands on a rounded podium flanked by two staircases. Other rounded elements include most of the corners, the small windows opening to the Ya’el Street and the rounded balconies facing the Ruth Street. Oskar Kaufmann was also working on the project of the Habima Theatre in Tel Aviv around that time. He is the architect of a number of theatres in Europe (from both before and after World War Two). 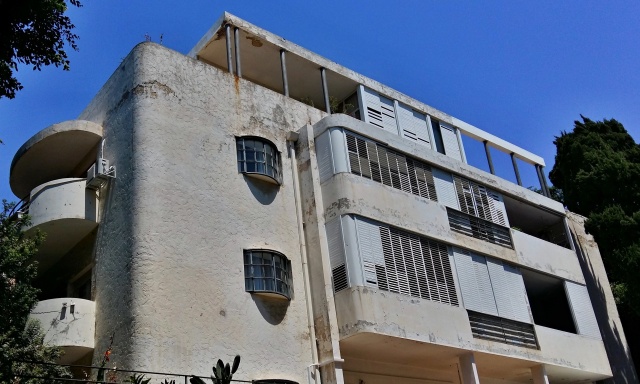 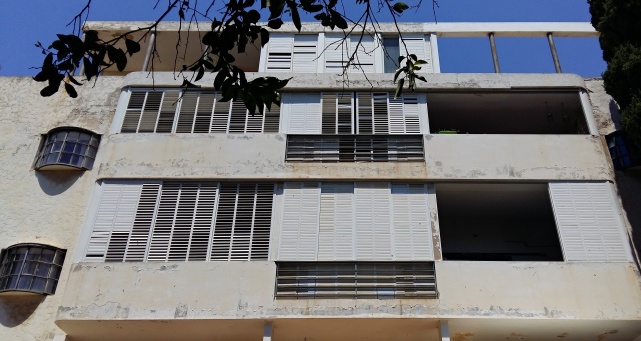 This building, like the nearby Shimon Levi House and the building on Rosh Pina St. 26, was designed by Arieh Cohen. 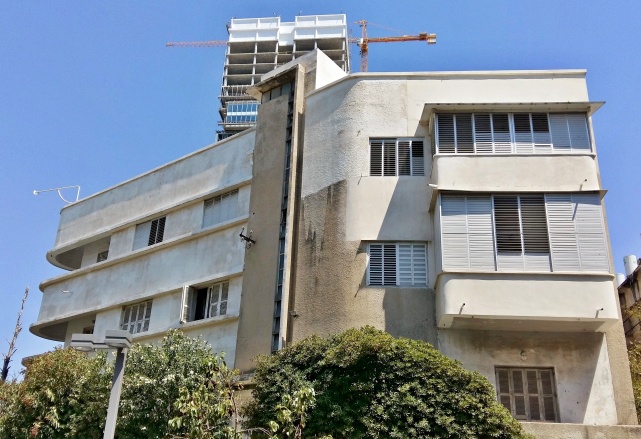 This famous building got its nickname from the slatted openings along the staircase window, designed to allow light to stream into the staircase while limiting the amount of the intruding heat. 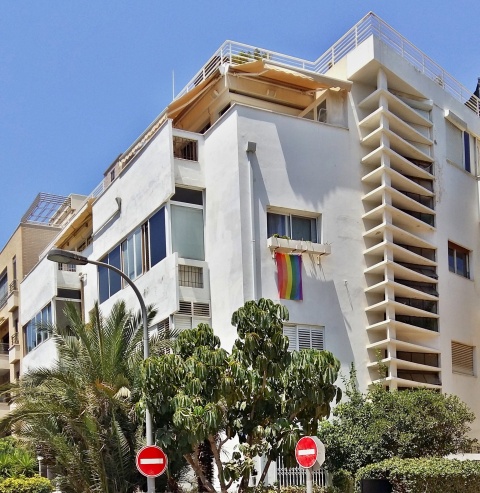 This building, one of the most prominent examples of International Style in Tel Aviv, was designed by Abraham Markusfeld. Some attribute it to Lucian Korngold, but this is supported by no documentary proof. It is raised on pilotis and has a strong horizontal emphasis, with long balconies facing the Sheinkin Street and curved, ship-like balconies along the HaGilboa Street. Its façade is made of scraped plaster with glittering mineral aggregate. It has a luxurious lobby and spacious apartments.

This is one of the most important International Style buildings in Tel Aviv. It was the first in Israel to use elongated recessed balconies. Horizontality is further stressed by the design of the parapets and overhangs. These function to limit the amount of heat that passes through the balconies. The building was recently restored and is soon expected to open as a Bauhaus museum. 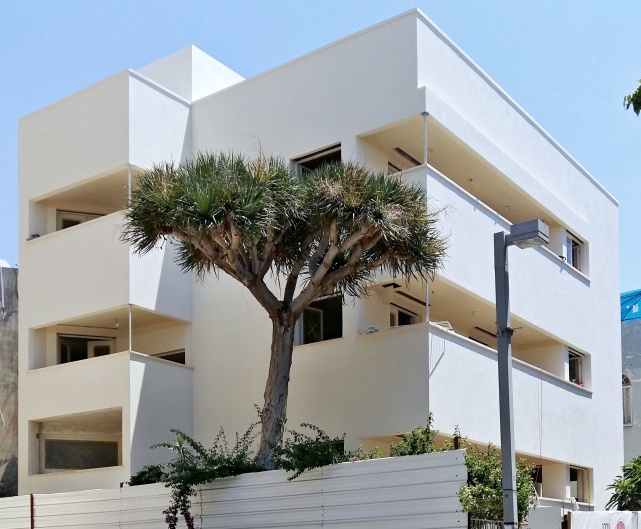 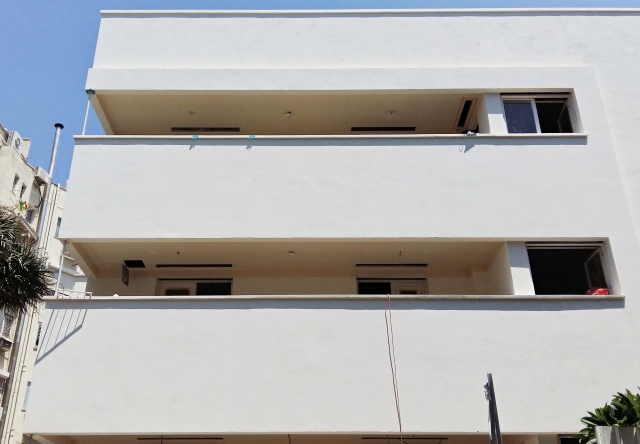 The thermometer window of the central stairwell contrasts with the elongated and curved balconies on its both sides. 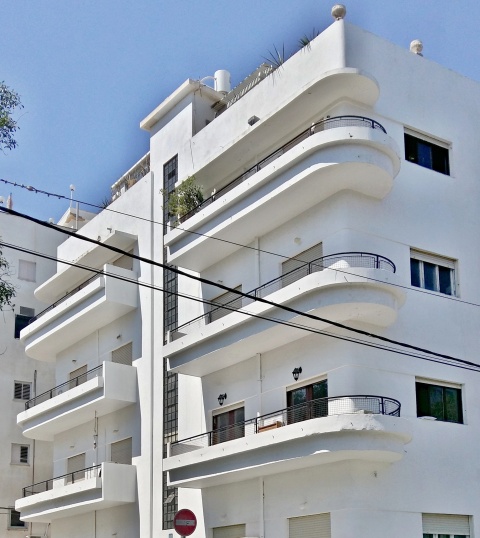 The design of this building was widely appreciated by the contemporary architects. It has the appearance of consisting of two volumes, which are bound together by balconies. The volume on Mapu Street, standing on pilotis, has balconies along the entire façade. Horizontal windows are visible on the Yeho’ash Street façades.

This remarkable International Style building was designed to contain shops on the ground and mezzanine floors and offices on the upper floors. In reality, it has always had space for apartments as well. Notable elements include the stairwell windows placed in a vertical row at the corner, the play of horizontal lines on the windows and balconies of the two façades, and the iron-and-glass windows and ribbon windows of the commercial floor. The restored staircase is very beautiful. 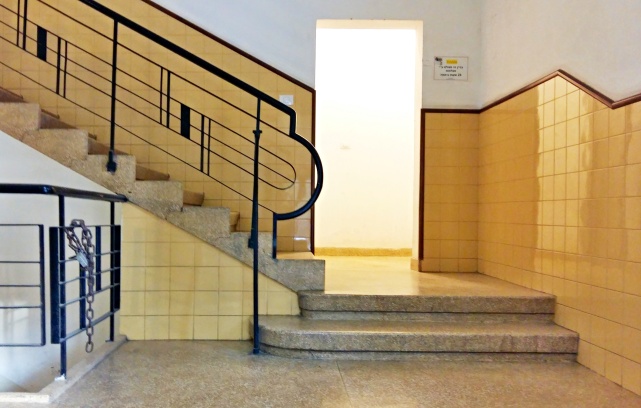 This building’s corner stands on pilotis, which free the ground floor for gardening. Long balconies, horizontal windows, and hanging parapets accentuate horizontality. At the corner facing the garden is a thick polygonal protruding element with long horizontal windows. This may be an extension from 2008, as is the upper floor of the building. 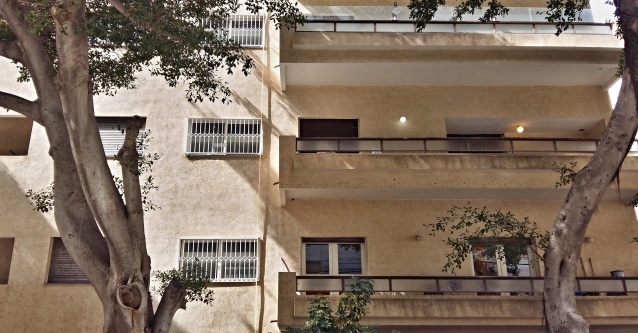 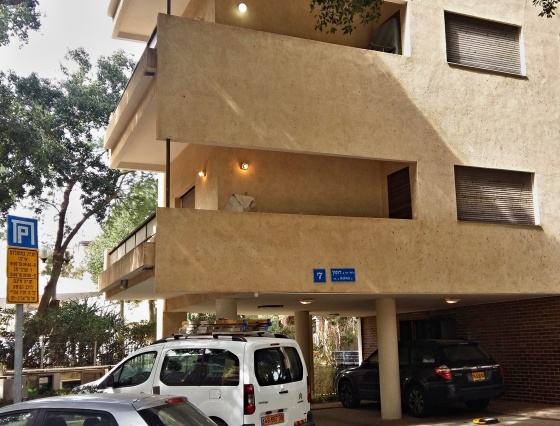 This building is partially raised on pilotis. It has open balconies and a pergola on the roof. Its most outstanding features are the front entrance on Mendelsohn Street and the vertical stairwell window above it.