The façade of this hotel leaves a very controlled impression, because of the dense web of horizontal and vertical lines.

This Modern Style building is the most impressive on Tamar Chovelidze Street.

This enormous late Modern Style building occupies an entire block on the other side of the street from the Georgian National Academy of Sciences. It was built by a well-known Tbilisian oil merchant and benefactor in memory of his deceased daughter, as shown by the abundance of mourning wreaths on its façades and by the teardrop-shaped windows at its corner. The complex contained apartments, shops, a cinema, a photo salon, an art gallery, warehouses, and a garden with exotic plants. 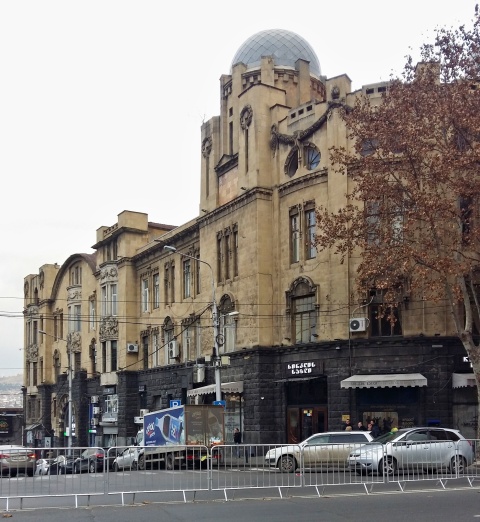 The bar-tavern-restaurant named Marco Polo on the Rose Revolution Square has very beautiful Art Nouveau and Oriental interiors, but I couldn’t get any information from the waitresses about their history and authenticity. 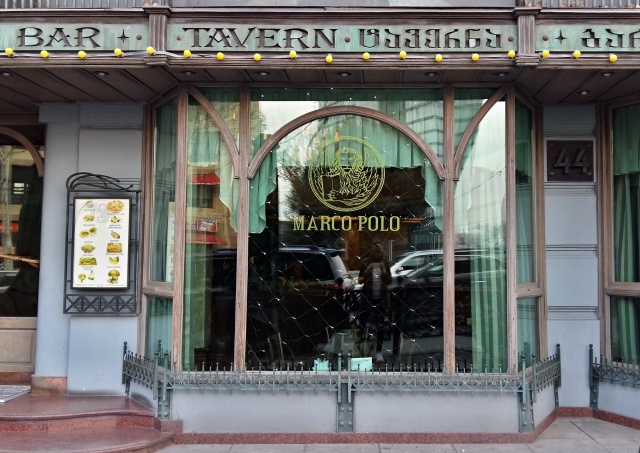 This massive red-brick structure of Gothic and Art Nouveau inspiration is a former House of Invalids. Like the Marjanishvili Theatre, it was commissioned by the Zubalashvili brothers, after whom the street where the building stands is named.

This imposing residential building looks like a school house from behind the closed gate on Ritsa Street. It has an intimate courtyard with a beautiful wrought-iron gate and a lantern. Other surviving works by Neprintsev include the buildings on Chkheidze Street 8 and Ingorokva Street 20. 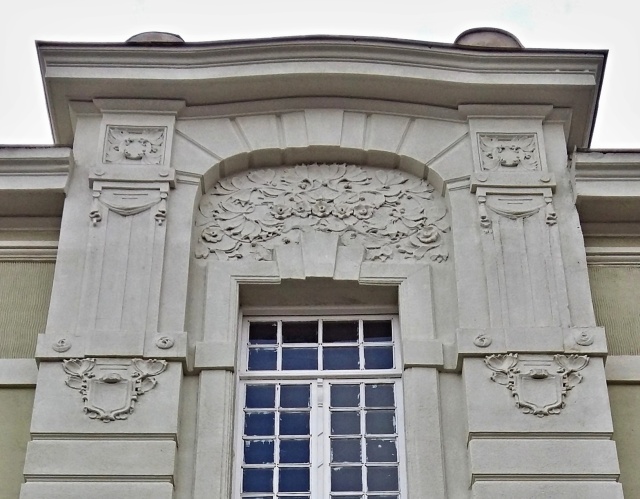 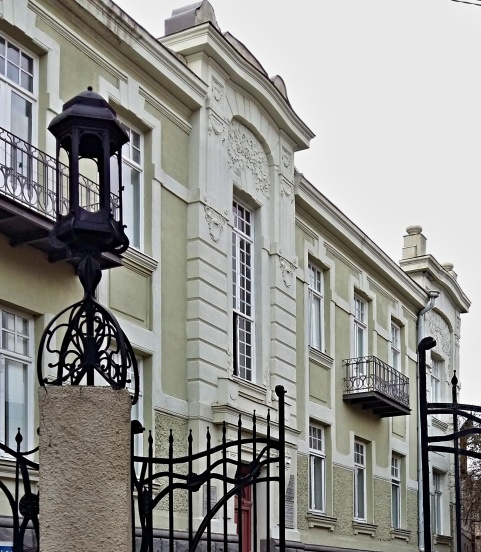 This building has a beautiful façade with a fan-shaped balcony near the corner with Vaso Abashidze Street.

The only place where one can admire the beautiful façade decoration of this building is the garden of the Georgian National Opera Theatre.

The abundance of plant motifs makes it the most outstanding of the Modern Style buildings on Rustaveli Avenue. It is surprising that I haven’t been able to find any information about an eye-catching structure in such a prominent location.

This attractive building is one of the several examples of recent restoration on the northeastern side of the 9th of April Park. 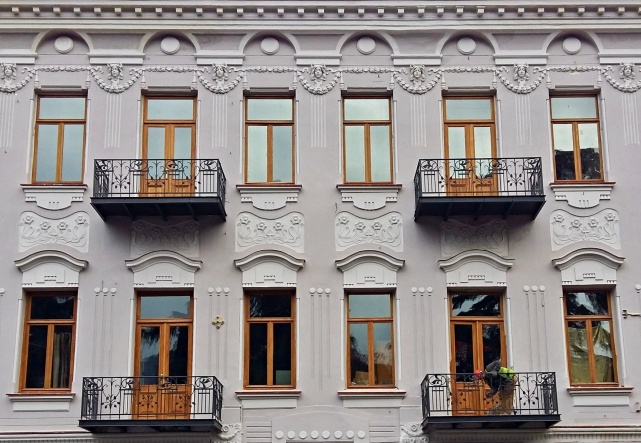 The decoration of the upper part of the central avant-corps of this building looks slightly Budapestian to me.

This eclectic building dates from the late Art Nouveau period. Its most remarkable elements include the façade decoration of the main entrance, the vestibule and the bay window facing Shio Chitadze Street. 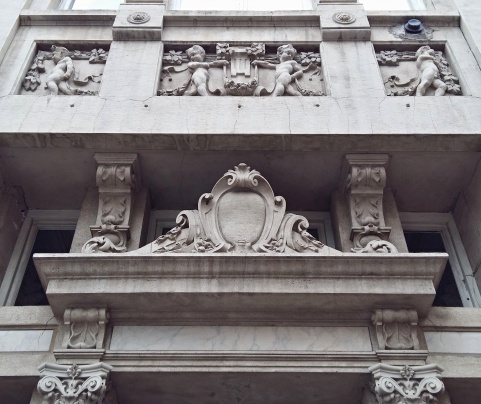 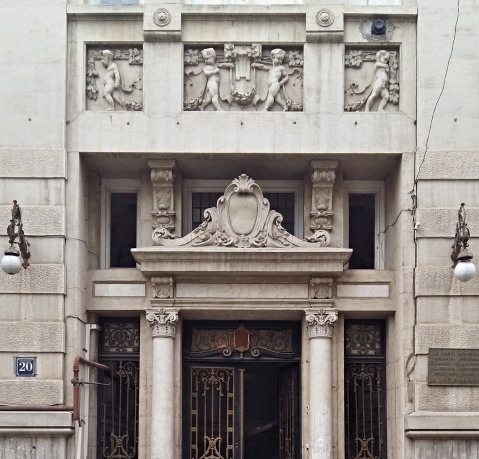 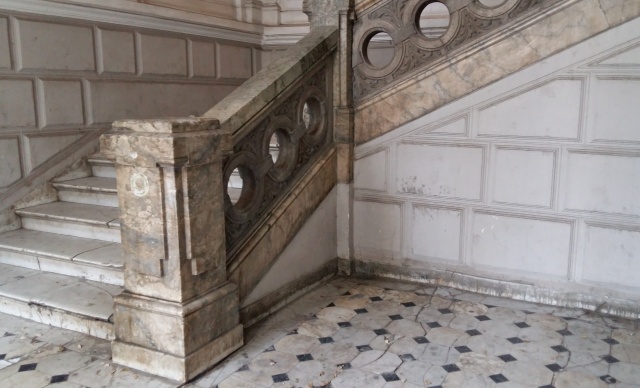 This huge building has rows of circular motifs on its façade (common in Georgian Modern Style), a cavernous main entrance (typical of National Romanticism of the Nordic countries), a beautiful vestibule decorated with ceramic tiles, and stained glass looking down onto the staircase. Ohanjanov’s earlier works include the building on Dzmebi Zubalashvilebi Street 48/52 and that of the Mutual Credit Society. 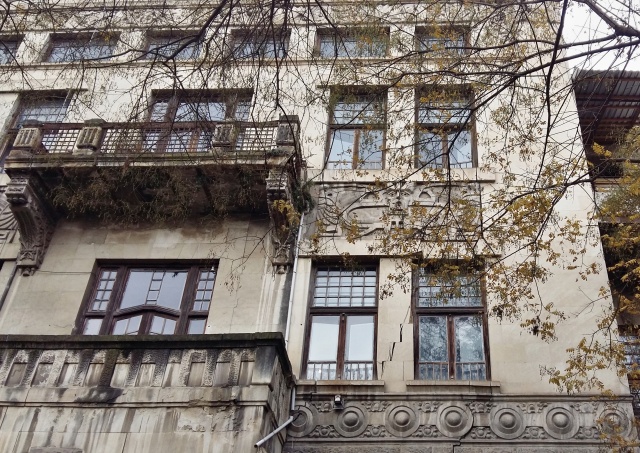 This massive building, occupying a dominant position at the corner of Amaghleba and Gergeti Streets, has some Modern Style elements.

This façade on Amaghleba Street has some interesting floral decorations. 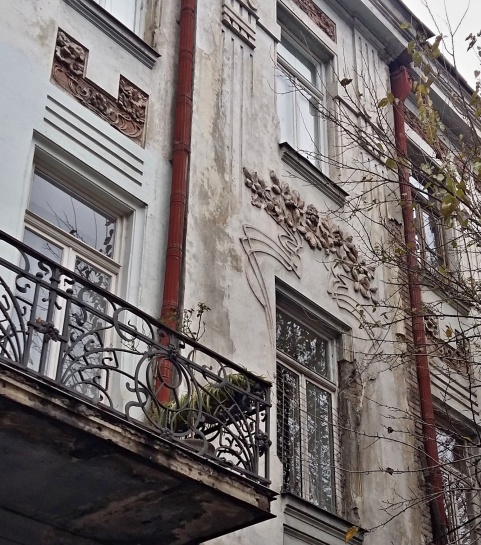 The placement of decorative details on this façade creates a peaceful effect, which is further reinforced by the building’s location in the periphery of the Sololaki neighbourhood. Zurabyan also designed the much more dynamic house on Tsinamdzghvrishvili Street 39.

This is probably the most remarkable of the Modern Style structures in the Sololaki neighbourhood. Formerly a residential building, it today houses a public school. Many of its decorative elements, such as leaves leaning on the lower sides of cornices, thick circles surrounded by leaves, mascarons, parallel lines, and a wavy roofline, can be seen in several other buildings of the period in Tbilisi. The volumes are interesting as well.

This cute little building originally functioned as a glove atelier. Its thin trapezoid entrance reminds me of some National Romantic buildings in Helsinki. 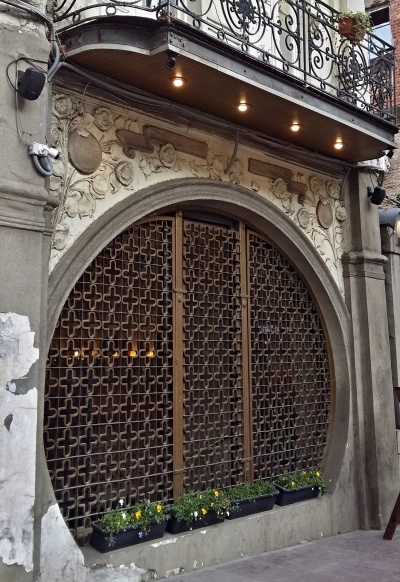 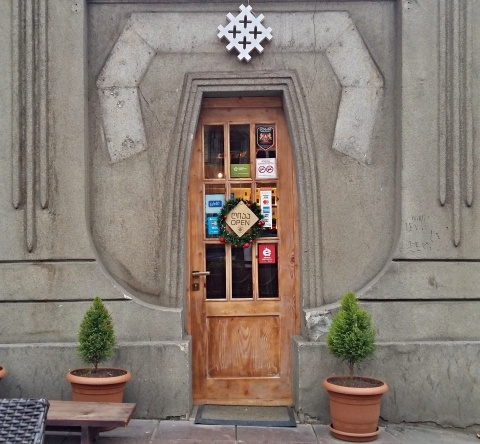 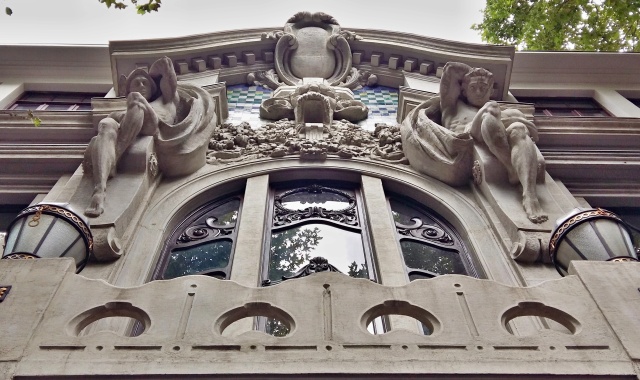 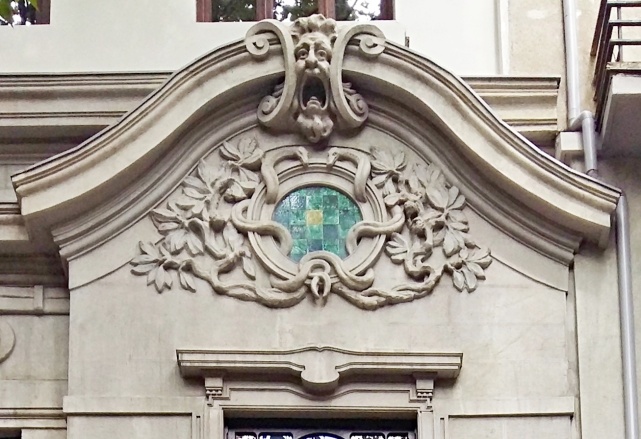 The Modern Style reconstruction of this 1870s building is a notable work by Simon Kldiashvili, who also designed the house on Rome Street 4. Its treasure is its main hall, which has a big stained-glass ceiling and a cashier’s booth with ornate ironwork. There are Art Nouveau whiplash lines and mascarons in the staircase leading up to it.

Flower-shaped iron supporting the awning of the doorway

This building is very similar to some National Romantic buildings in Riga, Tallinn or Helsinki. Note the rustication and the composition of the side windows. 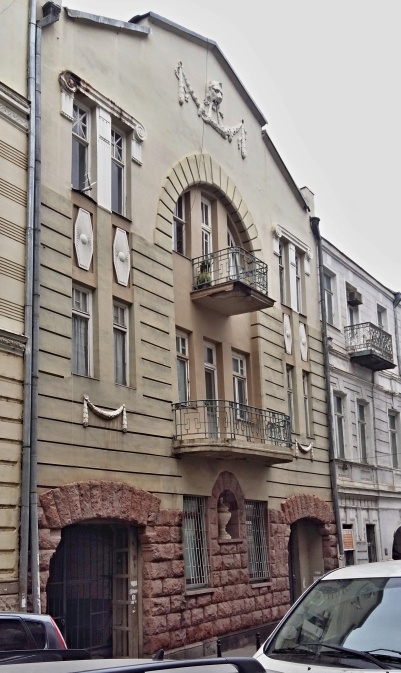 The more angular shapes on this façade hint that this building must have been built in the later phase of Modern Style. 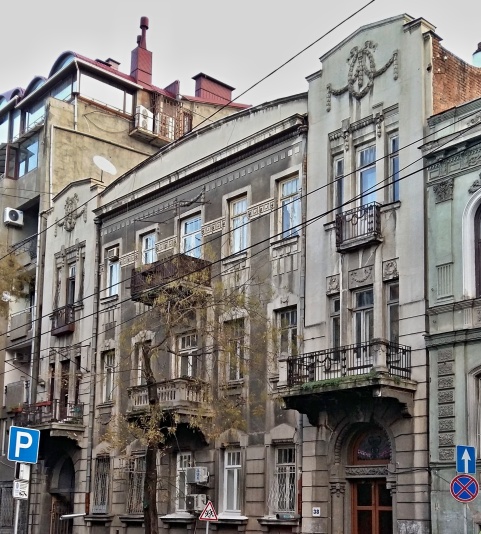 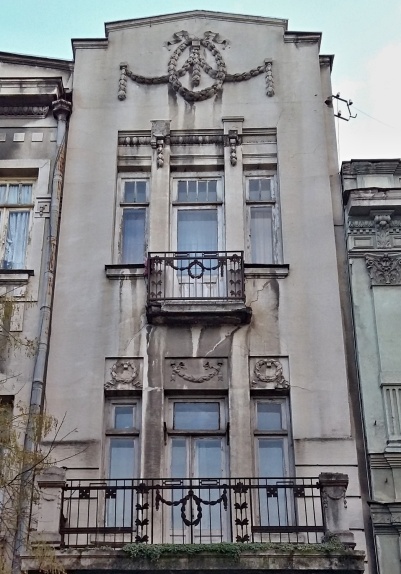 This beautiful building, designed by an architect from Germany, has some Modern Style elements on its façade. 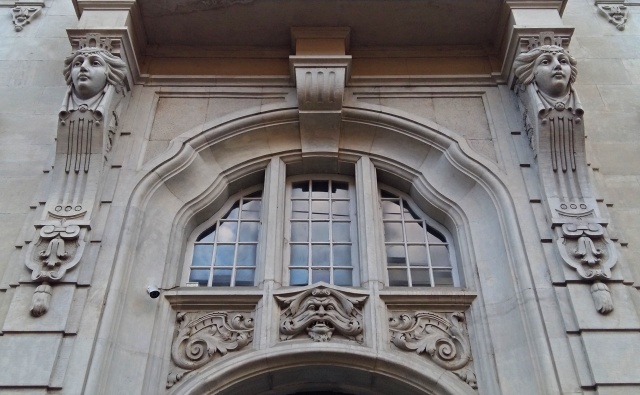 The building has a big garden with an ornate balcony in the back.

Interesting details include the rare Villeroy & Boch tiles on the terrace.

The building was originally the residence of David Sarajishvili, a well-known cognac producer and philanthropist. It was later turned into the Writers’ House, which is why it has had many famous guests, such as Vladimir Mayakovsky, Maxim Gorky, Mikhail Bulgakov, Osip Mandelstam, and Sergei Yesenin, as well as many influential Georgian writers.

This beautiful building, hidden behind the Lado Gudiashvili Square, has an entrance hall with a ceiling painting of a Jugendstil woman.

The reconstruction of the 17th-century Arzruni Caravanserai in the style of Art Nouveau is a unique phenomenon in the architecture of Tbilisi.

The two trading rows follow the curved line of the Bambis Rigi Street (means Cotton Row in Georgian). They were built on the initiative of Alexander Mantashev, an influential oil magnate, industrialist and financier at the turn of the century. Their architect seems to have worked with Mantashev in more than one occasion, as testified, for example, by a house on David Agmashenebeli Avenue 27. 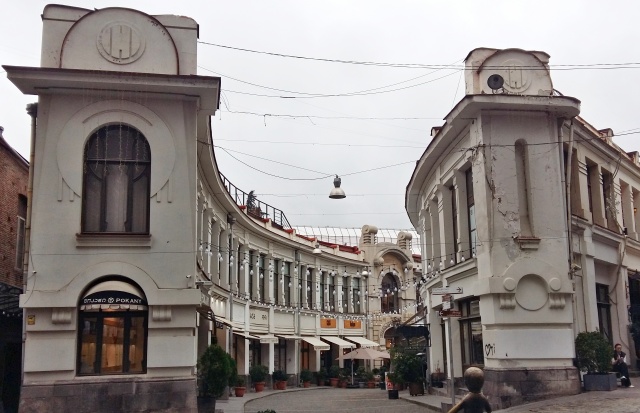 This building, King Gorgasali Hotel, is one of the most prominent Art Nouveau building in the old town of Tbilisi.