Tallinn has a well-preserved Gothic old town. Its churches date back to the Middle Ages, even though many were later significantly altered, especially in the 19th century, blurring the line between the original Gothic and Gothic Revival architectures. A number of the city’s merchant’s houses which were originally Gothic got new façades in the eras of Baroque and Neoclassisism, but their proportions are still visibly Gothic and in the interior, medieval elements can be found. In contrast, a lot of Gothic buildings remain relatively unaltered.

In my portfolio I have concentrated on two important features of the Gothic style: the portals and the gables. I have divided them in four categories:

I took the photos in February 2018. I will expand the collection with the photos of the Gothic interiors of Tallinn some time in the future.

You will find the locations of all the mentioned sites on the map below.

Part One: Church Portals and Gables

The main portal of the Church of Saint Nicholas is the oldest known decorative portal in Tallinn. Here appeared for the first time the straight impost, which in the following centuries became a trademark of the Gothic architecture in Tallinn.

The current church was built in 1405-1420. The north portal, however, dates from a 13th-century church on the site. Influenced by Westphalian architecture, the portal was originally covered by a wimperg. The current archivolts are probably from the 19th century. 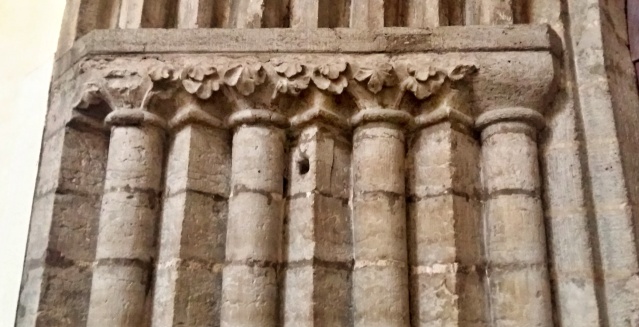 The small portal with a pointed trefoil arch on the south wall of the Church of Saint Nicholas is the only of such in Tallinn. It is from an earlier church, built in this location in the 13th century and showing influence of Westphalian architecture.

The Chapel of Saint Anthony is located on the south side of the church next to the tower. It was built more than half a century later than the current church, which dates from 1405-1420. Its portal has an impost with a figurative frieze. It is surrounded by a decorative wall of unplastered stones. 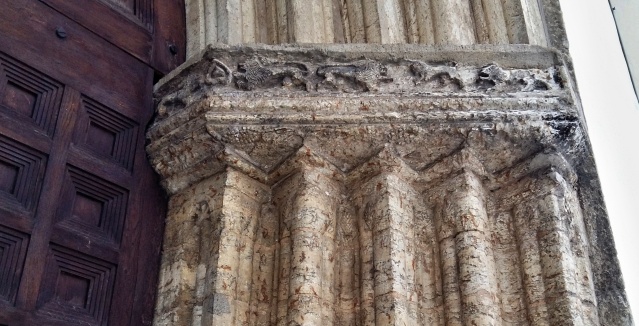 The Chapel of Saint Anthony of the Church of Saint Nicholas has a high gable decorated with blind windows and a hatch with a beam and pulley system.

1.5. North portal of extension of nave

I haven’t been able to date this internal portal but I assume it is from the time of construction of the western extension of the nave.

I assume that the portal connecting the Chapel of Saint Anthony with the western extension of the nave dates from the construction of the chapel (1486-1493).

This small portal, originally in the western part of the south wall, is today hidden by the vestibule through which the church is entered. It influenced greatly a number of portals in Tallinn, beginning with that of the Town Hall.

The south-west chapel has been converted into a vestibule, and its portal serves as an entrance to the cathedral.

Second half of 14th century

The big portal in the centre of the west façade of the Church of Saint Catherine follows the style of the main portal of the Cathedral of Saint Mary, constructed around half a century earlier. As typical to the Gothic portals in Tallinn, the imposts are straight, but here they consist of three horizontal belts. The middle belt is covered by a frieze of dragons, dogs and lions running in the direction of the church. Under the frieze there are grapevines and oak trees – symbols of paradise. The motif of the Last Judgment so depicted is an example of the moralising scolastics that become widespread after the Saint George’s Night Uprising (1343-1345). This is the most impressive of the church portals of Tallinn. 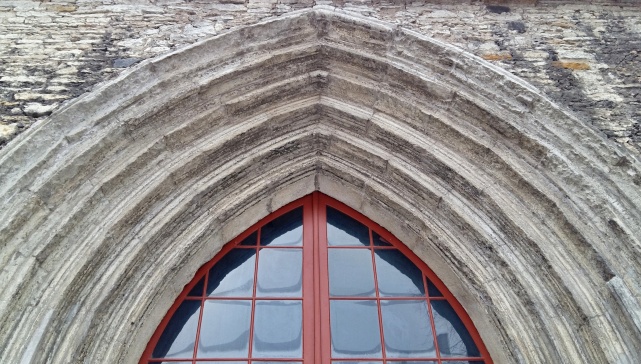 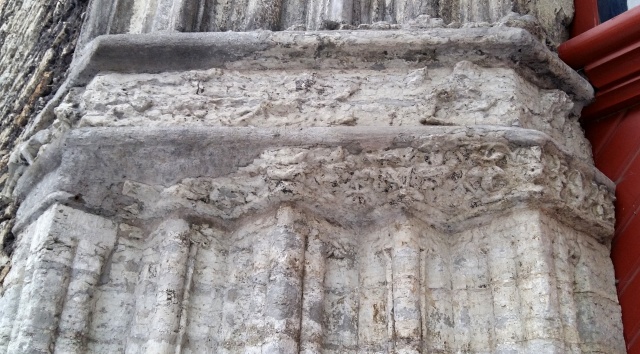 Second half of 14th century

The smaller portal that opens to the south aisle of the church has, unusually in Tallinn, gradatory imposts. These are covered by friezes decorated with Gotland-style masks and leaves. Some leaves and roses are also carved directly into the right angles of the stone supporting the imposts.

The Convent of Saint Bridget was built in 1417-1436. It was destroyed by Russian troops led by Ivan the Terrible in 1577 during the Livonian War. The walls of the church, which include a 35-metre western gable, are, however, still up.

The gable is decorated with long narrow blind windows, which were copied on many façades in Tallinn later in the 15th century. 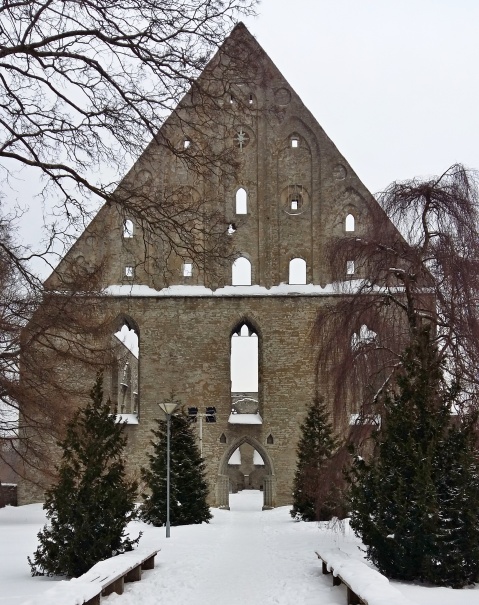 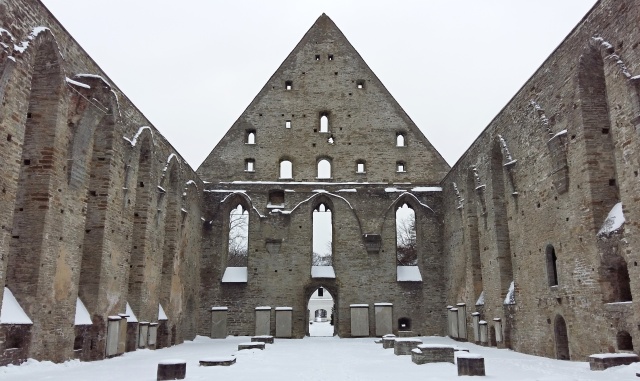 The straight impost of the portal of the church was inspired by the main portal of the Cathedral of Saint Mary but looks more complex in comparison with the earlier examples. 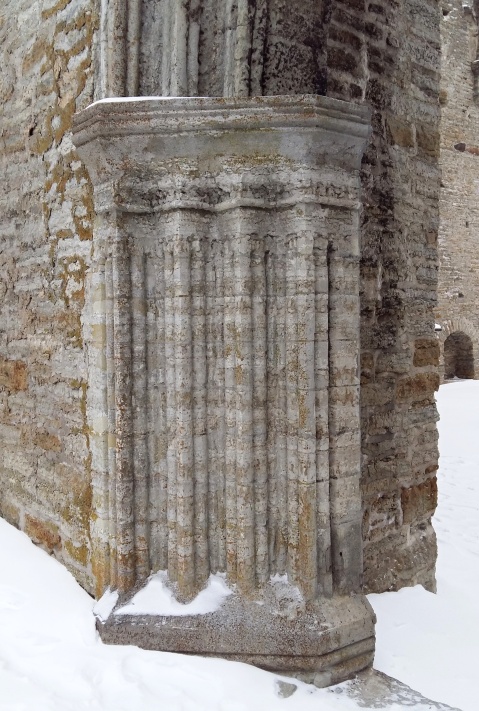 This is another portal typical of Tallinn. 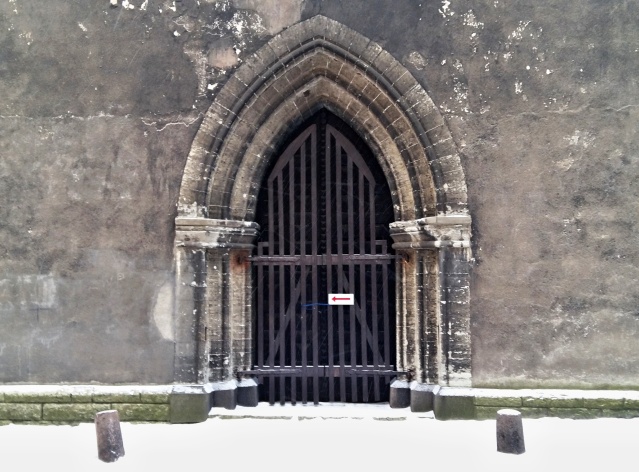 6. Church of the Holy Spirit

Even though the Church of the Holy Spirit dates, in its form, from the 14th century, its main portal is only from 1597. Like the side portal of the Church of Saint Catherine, it has gradatory imposts, an unusual feature in the medieval Tallinn. There used to be a smaller portal in the south wall. 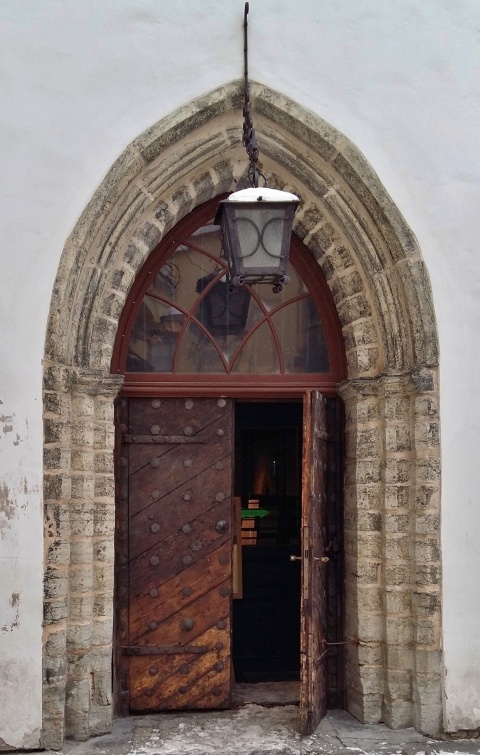