The Jews of Mainz originally lived near the Rhine between the Fish Tower and the Carmelite Church. This area was not a ghetto, and non-Jews were allowed to live here as well. The synagogue was located in the area of the Church of Saint Quintin. The oldest mention of it is from 1093. It was destroyed during the 1096 massacres. A new Jewish prayer house operated here between 1188 and 1281 (and possibly beyond). There was also a mikveh, a hospital, a butchershop, and a bakery.

The most important Jewish site in Mainz is the medieval cemetery known as the Judensand. Just like in case of the Jewish Cemetery Holy Sands of Worms, the name refers to the sandy terrain prevalent along the Rhine.

The cemetery, possibly located above a Roman burial ground, was established in the 10th or 11th century. According to unverified sources the land was obtained for the construction of a cemetery in 1012. The oldest gravestone, of Yehuda ben Shneor, is from 1049 (now in the Mainz State Museum). It is the oldest known Jewish gravestone north of the Alps. The earliest mention of the cemetery is from 1286.

The cemetery was used until 1438. At the end of the 15th century most of the stones were removed and used as construction material, although some underground and sunken stones remained in place. At the end of the 17th century there were no original gravestones in situ. The cemetery was used again by Jews in the subsequent centuries. Before World War II around 1,500 gravestones from this period were counted.

In 1926 the Judensand was turned into a memorial cemetery. The displayed gravestones are not oriented to the east, as is usually the case in Jewish cemeteries, but placed along a didactic path. Eigth that can be seen today are from the 11th century, among whom is the gravestone of Yaakov ben Yakar (1064), student of Gershom ben Judah and teacher of Rashi.

The Judengasse of Mainz (today’s Margaretengasse) is first mentioned in 1568. The Jewish ghetto was officially established here in 1671 and enlarged in 1710 and 1768.

The main synagogue of the ghetto dates from the 17th century and was enlarged by 1717. It had four floors: the prayer hall on the ground floor, a community room on the first floor, a yeshiva and apartments on the second floor, and further apartments on the third floor.

In 1853, a new synagogue was built on its foundations. It was in Moorish Revival style and had 764 seats. It was a liberal synagogue, with an organ, one of the first in Germany. It operated until 1912, when the new Main Synagogue was completed.

The Orthodox synagogue was built in 1856 in opposition to the liturgical reforms carried out in the Main Synagogue. That building was replaced by a new one in 1877-1879. The new synagogue was in Moorish style and had the capacity of 300 people. Part of the complex was the Bondi School, established in 1859. It was damaged in the Kristallnacht and subsequently destroyed.

This simple one-storey synagogue was constructed on the foundations of a secular building in the village of Weisenau, which had a significant Jewish population in the 18th century. It was badly damaged in 1793, and it took until 1818 to restore it. In the mid-19th century a mikveh was built here in addition to an older mikveh from the Baroque era.

During the Kristallnacht the synagogue was looted and desecrated. It nonetheless survived the Nazi era. Used as a shed, a warehouse and a henhouse after the war, it was restored and reopened in 1996.

The New Jewish Cemetery was founded in 1881 next to the Main Cemetery of Mainz. It has a remarkable ceremonial hall – a low brick building in Moorish style designed by Eduard Kreyßig.

In 1912 the Main Synagogue of Mainz was moved out of the former Jewish ghetto into the Neustadt district. The new synagogue was a monumental central building with a dome (diameter 27 m, height 25 m) and lower side wings. It had 580 seats for men and 482 seats for women. It was damaged in the Kristallnacht and subsequently destroyed. A customs office building was erected on its site in 1945. Today only fragments of the colonnade hall of the synagogue survive, displayed in front of the New Synagogue. 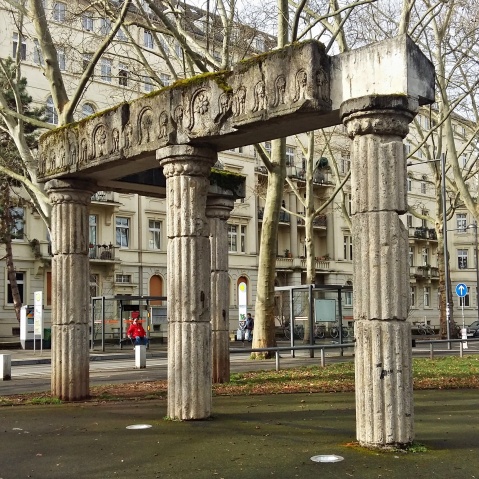 This is one of the most interesting contemporary synagogues in Germany. It consists of the alternation of high and low volumes. The profile uses in an abstract way the five characters of the Hebrew word kedushah, which means holiness.

The highest volume is oriented towards the east, towards Jerusalem. It brings light into the centre of the building, and the light falls exactly onto the place from where the Torah is read. It is a reference to the shofar – a ram’s horn symbolising the communication between God and humans. 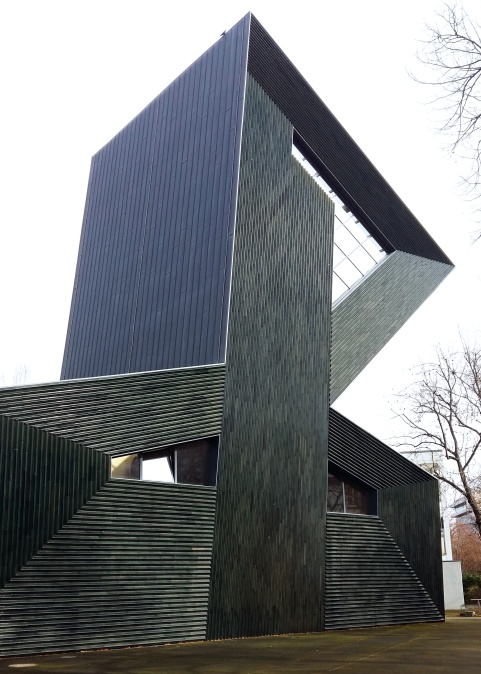 These symbolisms are reminiscent the spatial organisation of the Jewish Museum of Berlin, designed by Daniel Libeskind (1989-2001).

The external walls are made of tiles which are arranged concentrically around the windows, creating multiple perspectives. The transparent green colour of the glazing enhances the play of light.

In addition to the 450-seat prayer room, the synagogue contains a mikveh, a kosher kitchen, a kindergarten, a classroom, a library, offices, and apartments. It has an internal garden and, unusual for synagogues, a vast public space in front of it.