The synagogue of Worms consists of three separate parts, which are from different periods.

The first synagogue on this site was built in 1034. It was financed by Jakob ben David and his wife Rahel, as announced by an inscription that can be seen in a wall next to the entrance. It was located west of the current synagogue, in the area of today’s yeshiva. The east wall of the original synagogue and the west wall of the later synagogue are partly identical. The old synagogue was damaged during the persecutions of Jews that took place during the first two crusades in 1096 and 1146.

The second synagogue was built in 1174/1175 in Romanesque style. It was a rectangular hall with two naves and six bays. Two central columns and four corbels at the corners supported six vaults. The bima stood between the columns. The capitals of the columns were richly decorated (cf. Worms Cathedral). This is the oldest example of a double-nave synagogue, a type which became a standard in Europe in the Middle Ages. Later examples of this ground plan include the synagogues of Regensburg (1227) and Prague (1270). 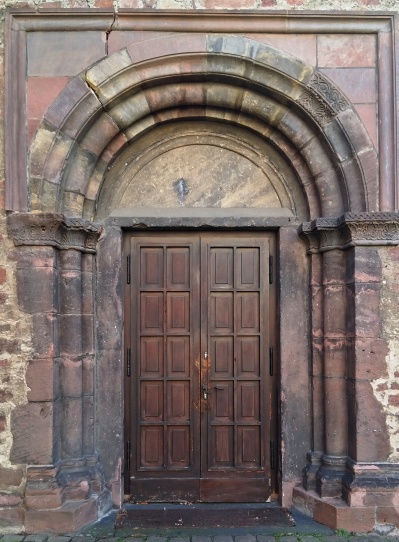 In 1349 the vaults and walls of the synagogue suffered great damage. In 1355 it was restored, during which the original oculi were replaced by Gothic windows and the ceiling got groin vaults. 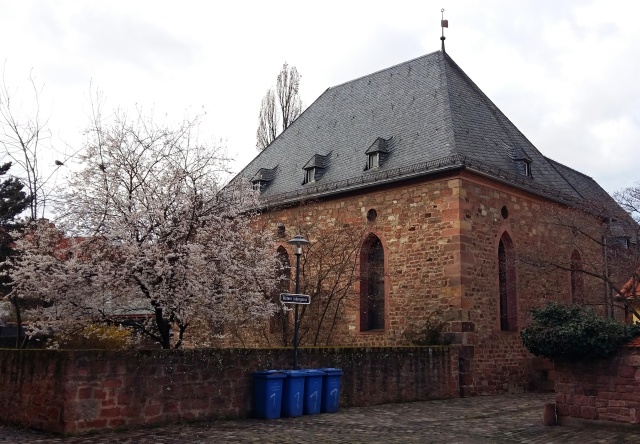 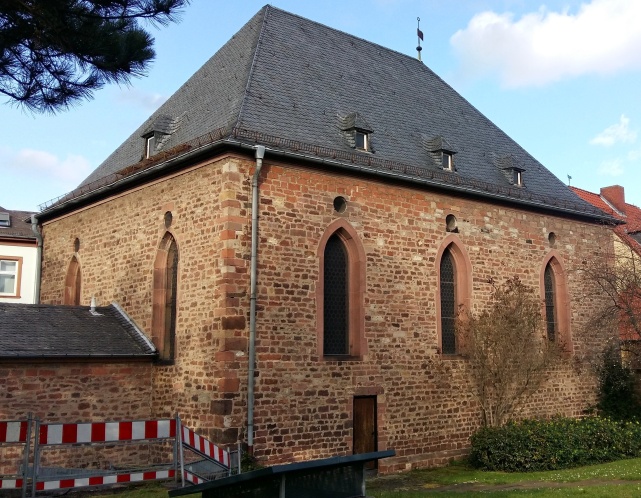 The synagogue was also damaged in 1615 and 1689, after which the interior was renovated in Baroque style (including the modification of the Torah ark, originally from the Renaissance period). 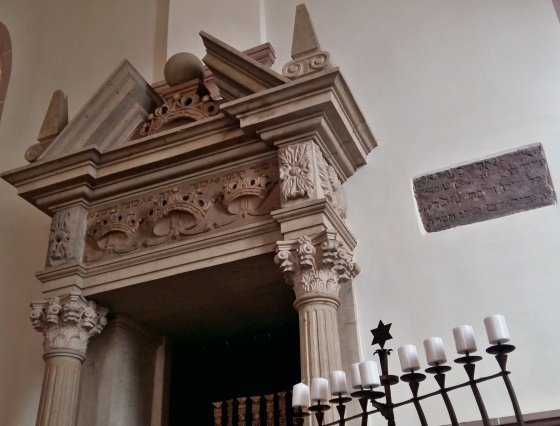 The synagogue was destroyed during the Kristallnacht in 1938 and the subsequent years. It was reconstructed in 1956-1961, using the surviving elements of the old building. The organ loft of 1868 was not rebuilt. The hip roof is new.

This is the first known women’s synagogue in Europe. It is a rectangular hall with a central column – the earliest example of this type (later copied in Speyer, for example). It is lower than the men’s synagogue. There are Romanesque windows in the eastern wall and Gothic windows in the western wall.

The women’s synagogue is attached to the northern wall of the men’s synagogue. The two spaces were separated by a wall with a door and five listening windows, through which women could hear the services. In 1842, with the growing influence of Reform Judaism in Worms, the separating wall was removed, and the door and the listening windows were replaced by two large pointed arches.

In 1616-1620 a vestibule was built north of the women’s synagogue. This structure is the first that a visitor sees today when he enters the synagogue square.

Attached to the western wall of the men’s synagogue is the so-called Rashi Yeshiva. It is a small room with a separate entrance and an apse. Along the wall of apse there is a stone bench. The windows are Romanesque and the portal is in Renaissance style.

The mikveh of Worms stands southwest of the synagogue. Its plan follows more or less that of the mikveh in Speyer. It was built as a private donation. The donation inscription survives until today.

The mikveh had a separate entrance building from which a staircase led to the anteroom. That building was demolished in the 19th century. The current entrance is from the 20th century.

The anteroom has a trapezoidal ground plan and is covered by a barrel vault. Like in Speyer, it had four columns in the corners, windows overlooking the ritual bath, and a vaulted niche which possibly functioned as a heater. A staircase leads to the groundwater pool, which is located in an 8m-deep shaft. The shaft is connected to another shaft, which opens to the ground and permits the flow of rainwater into the mikveh.

Until the beginning of the 18th century the mikveh was used by both men and women, while another mikveh, not surviving, was used by men only.

The history of the Rashi House goes back to the 14th century. A yeshiva, named after Rashi, operated here and was considered as one of the most important in Germany. In the 15th century the building was used as a dancing house and a hospital. In the 18th century there was a room with a Torah ark in the building – the so-called Klaus Synagogue, used for workday services. A rabbi also lived here. In the 19th and 20th centuries it was a nursing home of elderly Jews.

The Nazis called the building the Judenhaus, as it provided temporary lodging for the Jews whose houses had been taken away, before their deportation to the concentration camps. The building was heavily damaged during World War II and was pulled down in 1971. It was reconstructed in 1980-1982.

Today the Jewish Museum Worms operates in the cellar and the ground floor. Here some remains of the medieval building can be seen. The city archive of Worms has spaces on the upper floors.

The New Synagogue of Worms is located on Judengasse, across the square from the old synagogue. It was named after its donor, banker and merchant Leopold Levy. It was established by the Orthodox Jews of Worms who did not accept the liberal reforms carried out in the old synagogue since the 1840s. Nonetheless, the split between Reform and Orthodox Jews was not as strong as in many other German cities, and the Levy Synagogue was essentially the second house of prayer for Orthodox Jews, used for daily services and special events. It was built in Romanesque Revival style, with identical front and back façades.

Unlike the old synagogue, the Levy Synagogue was not set on fire during the November pogroms of 1938, as it stood in a row of residential houses, which would have otherwise burned down as well. It suffered great damage during the air raids of 1945, however, and its ruins were torn down in 1947. It was subsequently not restored, as there were no Jews left in Worms to do it, Historicism was not enough appreciated as a style, and the reconstruction works then concentrated on the old synagogue.

Jews were allowed to live in Worms freely in the Middle Ages. In 1349 they were forced into the ghetto in the northern part of the medieval city, where they had to stay until 1792.

The houses of the ghetto were narrow and high, with three stories generally. Between the houses on the northern side of the Judengasse and the city wall there was originally a narrow space, but since the beginning of the 18th century the houses were expanded until the wall, which was pierced by windows in multiple places.

Most houses had high gables and timber frames. Many had house marks (e.g., a wheel, a horseshoe, a bottle, a monkey, a lute, an ox, scales, etc.), which helped to distinguish them from each other. These later came to be used as the family names of the inhabitants and can also be found on the gravestones in the Jewish cemetery of Worms.

The topography of the area has changed little since the Middle Ages, as the newer buildings had to take into account the borders of the original buildings. In 1907-1908 the area was slightly modified, with the opening up of the Karolingerstraße and the creation of the Rashi Gate in the city wall, to better connect the area to the outlying neighbourhoods. Not much is left of the original houses, however, except for some historical cellars, the oldest of which are from the 14th century.

The old Jewish cemetery of Worms is named ‘Holy Sands’, because of the sandy ground prevalent along the Rhein. According to a legend, the cemetery got its name from the sand brought here from the Holy Land.

It is the oldest Jewish cemetery in Europe that survives in a more or less complete form, if one does not count the Jewish burials in the Roman catacombs. The oldest gravestones are from the 11th century. For a long time, the gravestone of Jakob haBachur from 1076/1077 was considered the oldest. Now the oldest with still legible dates is the gravestone of an unknown person from 1058/1059. It is not know whether it dates from the foundation of the cemetery or after it.

The cemetery was located southwest of the city walls. A second wall was built around Worms in the 14th century, which left the cemetery between two belts of fortifications. In the 15th or 16th century, an underground passage was dug through the cemetery, to connect the gates of the inner and outer wall. It was 36 m long, 1.5 m high and 0.8 m wide. During this construction many of the gravestones were walled up. The outer city fortifications were destroyed in 1689. A new section of the cemetery developed on the higher ground here in the 18th and 19th centuries.

Today around 2,500 gravestones survive. These are, unusually, oriented to the north, and not east, as was common in Jewish cemeteries. Only the grave of rabbi Yaakov ben Moshe Levi Moelin (1427) is faced to the east.

The oldest gravestones are located at the southern tip of the cemetery, in the area known as the Valley of the Rabbis. While many rabbis are buried in this section, the resting place of the most famous of them – Meir of Rothenburg (1293) – can be found in the north, near the entrance to the cemetery. 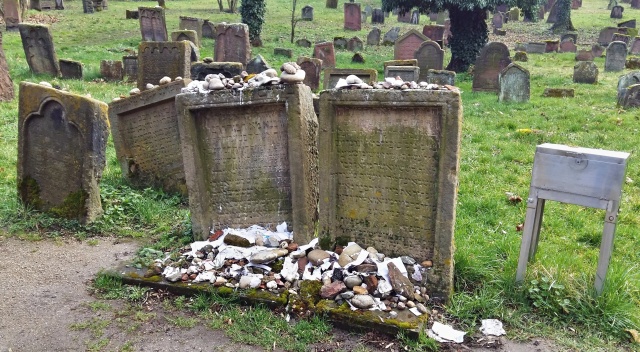 The main feature on the gravestones is the inscription, sometimes calligraphic, containing quotations from religious texts and references to the name, function, activities and influence of the deceased. The inscription may be embellished with rhyme and metre, such as on the gravestone of rabbi Nathan ben Isaak (1333).

The earliest gravestones are mostly rectangular, tapering slightly towards the base. Sometimes they show ruled lines (before the 13th century). 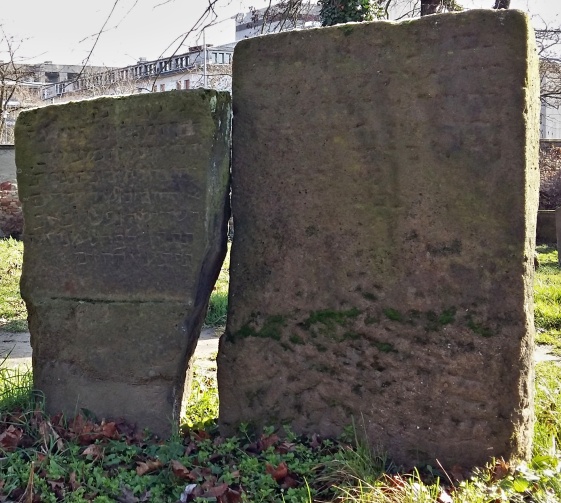 From the 12th century onwards the surface bearing the inscription was often set within a raised frame. These frames had various shapes, such as Romanesque and Gothic. 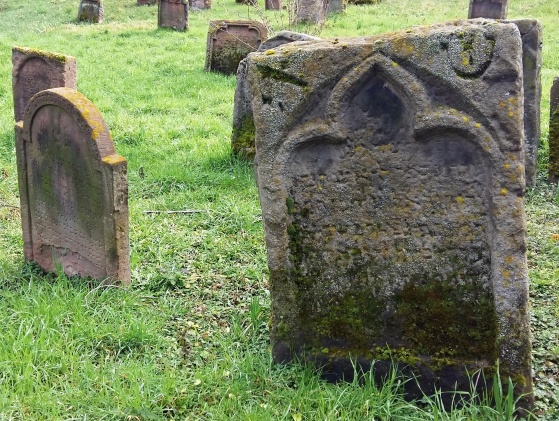 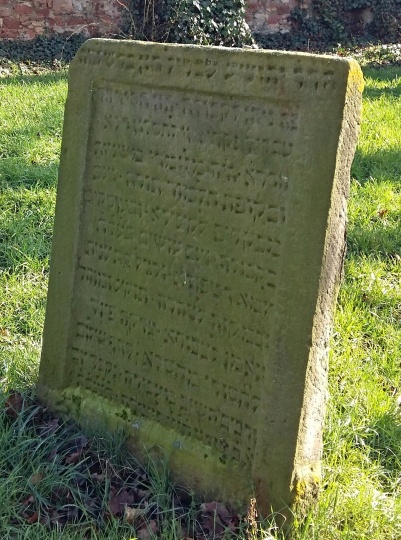 In the 16th century, figurative depictions appeared on the gravestones, such as the hands of the Kohen or the Levite pitcher. Since the Baroque era it was common to decorate the stones with house marks of the deceased (e.g. an ox, a peacock, a star, a wheel, a horseshoe, etc.). The name of the deceased may have been converted into a picture, such as the jumping deer on the gravestone of Naphtali Hirsch Spitz (died in 1712).

In around 1740 gravestones in the form of the double tablets came into fashion. In the 19th century, Historicist styles were prevalent. Inscriptions were now often in two languages: Hebrew and German.

By the beginning of the 20th century the cemetery was full and could not be enlarged. It was closed in 1911. In 1912-1913 a watchhouse in was built at its entrance, designed by Georg Rohr and Ludwig Bruckmann. A mixture of Jugendstil and Expressionism, its most interesting feature was the upper floor window located at the rounded corner. The last family burials at the cemetery took place in the 1930s.

On January 14, 1933, Martin Buber, a Jewish philosopher, walked with Karl Ludwig Schmidt, a Protestant theologician, on the cemetery, reflecting on the ties between Jews, Christians and the God. A clearing which reveals the Worms Cathedral, with the Jewish graves in the foreground, is named after him.

The cemetery was attacked during the Kristallnacht and damaged by the air raids later. Some notable graves were destroyed.

The New Jewish Cemetery was established in 1911 as part of the Main Cemetery on Hochheimer Höhe. Some structures here, such as the ceremonial hall and the World War I memorial, are designed in the style of Darmstadt Jugendstil.