The first churches in Georgia were basilicas. Compared to the Roman basilicas they were generally shorter, with fewer supporting piers or columns.

A Georgian peculiarity is the three-church basilica. Here we find solid walls instead of colonnades between the nave and the aisles, which create three independent prayer areas. There is no direct communication between the nave and the aisles, or there is just a small door between. The aisles may be partly open to the outside, with the central sections of the outer walls being replaced by a short arcade.

It is not known what liturgical purpose the three-church basilica served for and where the type comes from. One theory has it that the plan was developed to accommodate both Chalcedonian and non-Chalcedonian communities in the same church during services. It has been suggested that it originates from Syria or that it is an interpretation of the Manichaean temple design. The absence of any comparable structures elsewhere makes the three-church basilica a uniquely Georgian phenomenon.

The two oldest discovered three-church basilicas can be found among the ruins of the ancient city of Nekresi. The Dolochopi Basilica, dating back to the mid-5th century, was built over an earlier church from 387. The Chabukauri Basilica was most probably constructed during the rule of King Trdat of Iberia (394-406). The both churches were large and had, uniquely in Georgia, a synthroron in the sanctuary apse. Their design shows affinities with the contemporary churches in the Sasanian Empire.

The Dolochopi and Chabukauri basilicas stand close to the ruins of a structure that is dated from the 2nd to the 4th century and is identified as either a Zoroastrian fire temple, a temple for the cult of the Sun, or a Manichaean shrine. Nearby are also the remains of the Nagebebi Winery from the 4th or the 5th century, built upon the ruins of a pre-Christian temple from the 3rd or the 2nd century BC and the place of origin of six asomtavruli inscriptions (most probably from the 5th century or after). There are also some other three-church basilicas in the area from the later centuries.

Below I will introduce the oldest standing three-church basilicas: the Bolnisi Cathedral and the Church of the Dormition of the Mother of God of the Nekresi Monastery.

The Bolnisi Sioni Cathedral got its name from Mount Zion in Jerusalem, as many other medieval churches in the country. It is a typical early three-church basilica. It is made of turquoise-coloured tuff.

The decoration of the Bolnisi Cathedral shows the influence of Sasanian art and uses symbols of Early Christianity, possibly mixed with depictions of the ancient local cults. 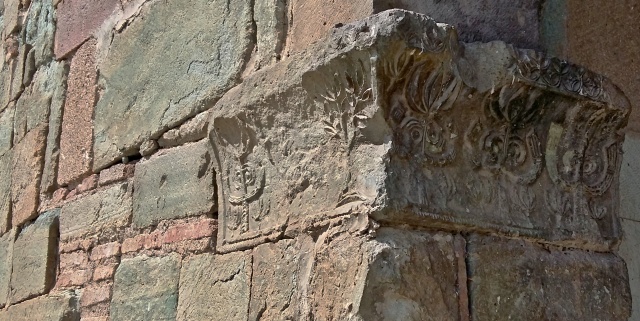 In masonry, techniques typical of the late antiquity can be seen.

Bolnisi Sioni is the oldest surviving church in Georgia. There is an inscription above the eastern entrance on the northern wall that informs that the church was founded in the twentieth year of the rule of Sasanian Shah Peroz I and took fifteen years to finish. This helps us to date the construction of the church to the years between 478 and 493. The decoration was completed some years later. The inscription, together with another one above the apse window on the eastern façade, mentions Bishop David, who initiated the construction of the church. There is a third inscription on the north side of the church.

Sanctuary apse with an inscription 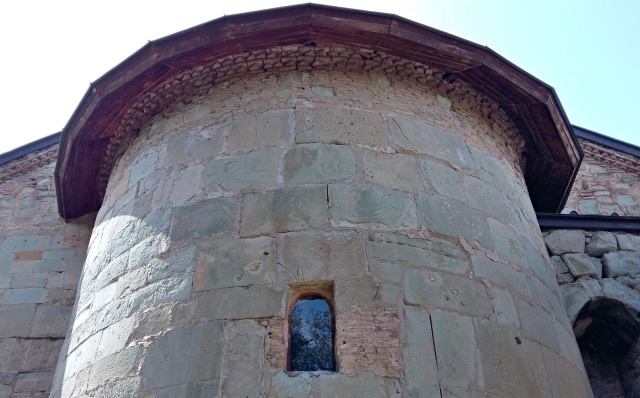 The three inscriptions of the Bolnisi Cathedral are written in the asomtavruli script of Old Georgian. These are the oldest remains of the Georgian alphabet, if one does not count the examples discovered from the Holy Land, such as the Bir el Qutt inscriptions, which were part of the mosaic floor of a Georgian monastery in the Judaean Desert and the oldest of which date back to 430, or the 5th-century Georgian graffiti discovered in Nazareth.

The Bolnisi inscriptions also show the Georgian version of the Early Medieval cross pattée, which came to be known as the Bolnisi cross. It is, together with the grapevine cross of Saint Nino, a symbol of Georgia.

Gravestones inside the church

The Monastery of Nekresi is located on a hill overlooking the Alazani Valley and the ruins of the ancient city. It was established by monk Abibos, one of the Thirteen Assyrian Fathers, who are believed to have founded a number of monasteries across Georgia in the 6th century.

The monastery complex consists of multiple structures from different periods.

The oldest of them is a hall building with a small rounded sanctuary in the east. It was long believed that it was a proto-basilica built above the ruins of a Zoroastrian temple at the end of the 4th century and, as such, one of the oldest churches in Georgia. This view is not accepted any longer, and the structure is considered to be, instead, a 6th-century mortuary chapel, as shown by the presence of a vaulted crypt under the floor. 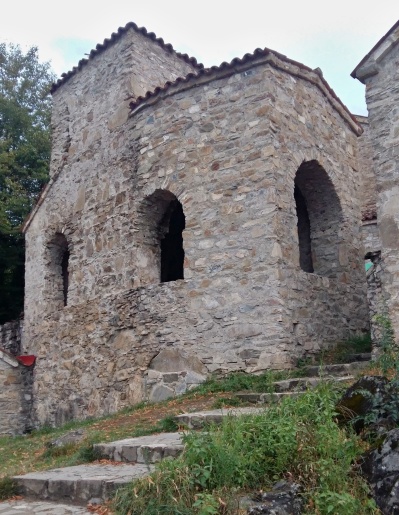 The Church of the Dormition of the Mother of God is a three-church basilica from the 6th or 7th century. The nave is connected to the aisles via a narthex in the west (and originally also via a door on the both sides). The nave has a deep sanctuary in the east, flanked by the rectangular pastophoria. The aisles also end with apses and are open to the exterior with arcades of two arches. The interior is decorated with Palaiologan frescoes from the mid-16th century.

The Church of Archangel Michael is from the transitional period of Georgian architecture (i.e. the 8th or 9th century). It is an early example of the combination of the three-church basilica with a dome. It has a nave with a pentagonal apse in the east, two aisles and a narthex. The southern aisle and the narthex are open to the exterior through two-arched arcades. The small, almost square-shaped nave has two squinches to the west and two pendentive-like structures to the east, which together carry the dome. The nave was originally covered with frescoes.

The 9th-century bishop’s palace has notable horseshoe-shaped arches and windows, an element which disappeared from Georgian architecture in the subsequent centuries. On the ground floor of the two-storey building is a wine cellar with a large rectangular wine press and a number of kvevri buried underground.

Windows of the bishop’s palace

Near the bishop’s palace is the refectory of the monastery, dating back to the 12th century. Nearby is also a defensive tower from the 16th century, built upon an earlier structure. The tower has a water reservoir with embrasures and a belfry on the upper floor. 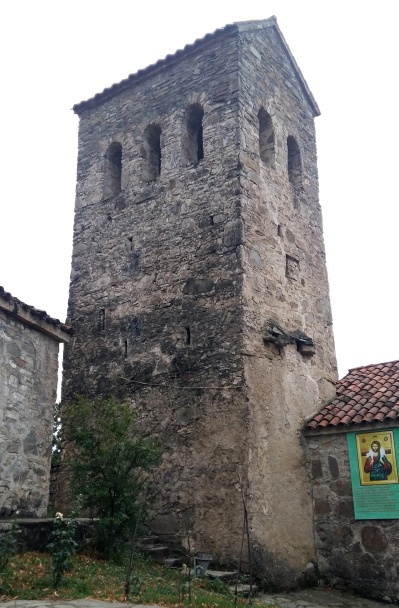 Other examples of three-church basilicas from the 6th century include the Zegaani and Old Shuamta basilicas in Kakheti and the Gagra Church in Abkhazia. Another three-chuch basilica – the Dmanisi Sioni Cathedral in Lower Kartli – is either from the 6th-7th or the 9th century.

More typical three-nave basilicas in Georgia include the Urbnisi Cathedral and the Anchiskhati Basilica in Tbilisi.

The Urbnisi Sioni Cathedral, dedicated to Saint Stephen, is a large basilica. Its nave is separated from the aisles by four pairs of piers made of sandstone blocks and with simply profiled imposts. Narrow rows of stone that lean on the piers raise up and meet on the barrel vault of the nave. The sanctuary is one step up from the floor level of the nave and is flanked by the pastophoria. At the end of the south aisle is a private chapel (eukterion).

On the outside, traces of several construction periods can be noted. The lower part of the walls is made of well-hewn blocks of sandstone laid in horizontal courses. These are from the original church. The irregularly placed sandstone blocks higher up are from the reconstruction of the church in the 9th or 10th century. The thin bricks in the upper part of the church and the brick buttresses are from 1668. 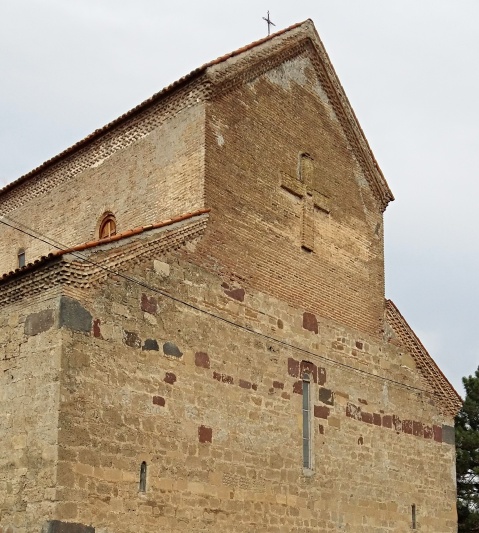 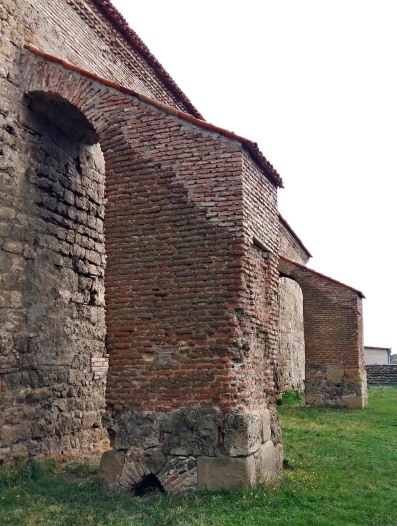 There are many details on the façades of the church. The architrave stone of the west entrance and the lunette above the south entrance are from the original church. On the north façade is an inscription in asomtavruli script, possibly from the 5th or the 6th century, mentioning the builders of the church – Konstantin and Father Mikheil. Above the south door are other inscriptions in asomtavruli, and on the east façade there are several more. Most of these date back to the 10th century. On both the east and west façades, on the level of the clerestory windows, there is a also big cross in relief.

Architrave stone of the west entrance

Inscriptions in a lunette above the south entrance

Inscriptions on the east façade 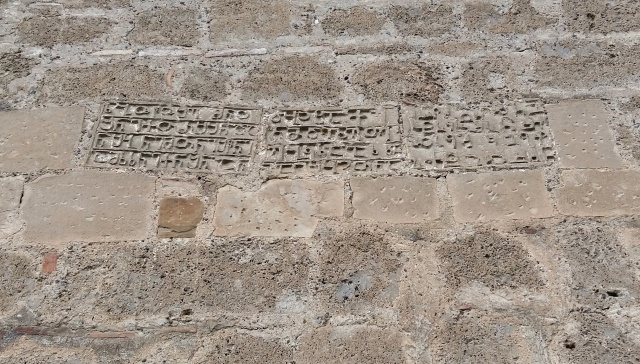 Relief with the Bolnisi cross and inscription on the east façade

In 1103, the Urbnisi Cathedral was one of the locations of a famous synod organised by King David IV the Builder, the other being the nearby Ruisi Cathedral. The Council of Ruisi-Urbnisi introduced direct royal authority in the church by creating the office of the chqondidel-mtsignobartukhutsesi, which merged the functions of the Archbishop of Chqondidi with that of the chancellor.

The bell tower was constructed in 1706.

This church was built by King Dachi (r. 522-534), the son of Vakhtang Gorgasali, the founder of Tbilisi. It is a three-nave basilica with a semicircular apse, which is, just like in the Urbnisi Cathedral, hidden in the straight eastern wall. The apse is flanked by the prothesis and the diaconicon. Arcades with thick columns divide the internal space into three. 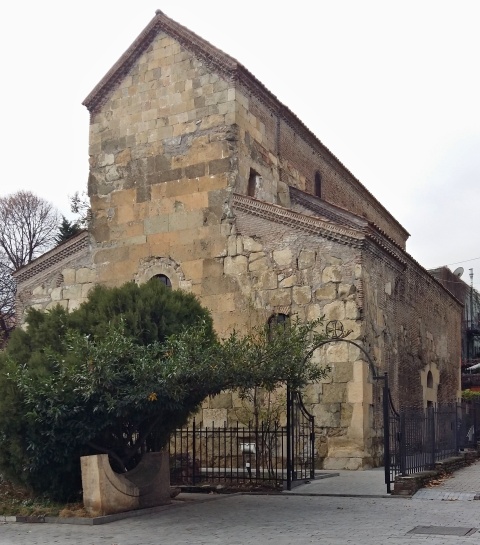 The church was originally made of blocks of yellow tuff. During the 1958-1964 restoration brick was extensively used.

The church was originally dedicated to the Nativity of the Blessed Virgin Mary. In 1675 it was renamed Anchiskhati, after an icon of the Saviour from in the Ancha Monastery in Klarjeti that just been brought to Tbilisi. The Ancha Icon was created in the 6th or 7th century. Beka Opizari covered it with a gilded chasing at the end of the 12th century. The icon is now stored at the Georgian National Museum.

The church is associated with the foundation of one of the first theological seminaries in Tbilisi in 1755. Today the choir of the church is known for being the leading exponent of Georgian polyphonic choral music.