Christianity spread to Georgia in the early 4th century as a result of the missionary activities of Saint Nino. At that time, the Caucasian state was known as Iberia, or Kartli, and ruled by King Mirian III (r. 284-361). Nino performed a number of miracles, which brought about the conversion of the king and his wife Nana. As a consequence, in around 337, Mirian declared Christianity as the state religion of his kingdom. This makes Georgia the third oldest Christian nation in the world, only slightly younger than Armenia, which embraced the religion officially in 301, and Ethiopia, which converted in 330. Saint Nino became the most important saint in the Georgian Orthodox Church. Her attribute, the grapevine cross – a cross with slightly drooping horizontal arms –, is one of the most recognisable symbols of Georgian Christianity.

In terms of architecture, Georgian churches can be discussed in the wider context of the art history of the Christian East. Most visible parallels can be drawn with Byzantine and Armenian ecclesiastical architecture. Types of churches specific to Georgia are the three-church basilica, which was typical in the earlier centuries, the tetraconch church with four niches, which found its most perfect form at the beginning of the 7th century, and a special variation of the cross-in-square church, which became the standard in the first half of the 11th century and, more or less, remained such until today.

With the below portfolio I aim to give an overview of the development of Georgian church architecture throughout the Middle Ages (from the 4th to the 18th centuries). I have photos of 31 buildings, which I will discuss more thoroughly, while also mentioning many other structures.

Most of the churches and monasteries that I will introduce can be found in the regions of Kartli, Kakheti and Imereti. The most famous examples include the Jvari Monastery and the Svetitskhoveli Cathedral in Mtskheta and the Bagrati Cathedral and the Gelati Monastery in Kutaisi. I will also mention some historically significant churches that are located outside the borders controlled by Georgia today: in the historical province of Tao-Klarjeti (in northeastern Turkey), and in the breakaway republics of Abkhazia and South Ossetia. In the last part of the portfolio I will introduce the unique churches in the isolated highland region of Upper Svaneti.

It is a long portfolio so I have added the below links for easier navigation:

The portfolio does not include medieval Georgian monasteries outside Georgia, such as the Monastery of the Cross in Jerusalem, the Iviron Monastery on Mount Athos, and the Petritsoni (Backhovo) Monastery in Bulgaria.

You will find the locations of the all the mentioned sites on the map below.

In my research the following sources were of great help:

The first churches in Caucasian Iberia were built following King Mirian III’s conversion to Christianity in the first half of the 4th century. These were most probably designed by Greek-speaking architects. The oldest churches that have been discovered are from the late 4th century.

West Georgia (the ancient Colchis) was part of the Roman Empire at the time. Among the oldest structures that have been discovered from here is a 4th-century basilica with three naves in Bichvinta (Pityus). From that basilica survives a 5th- or 6th-century mosaic known as the Fountain of Living Water. The mosaic, depicting a fountain with birds on either side, was part of a baptismal font that stood in the southwestern part of the basilica. Its decorative motifs and symbolism evoke the contemporary mosaics of the Near East. 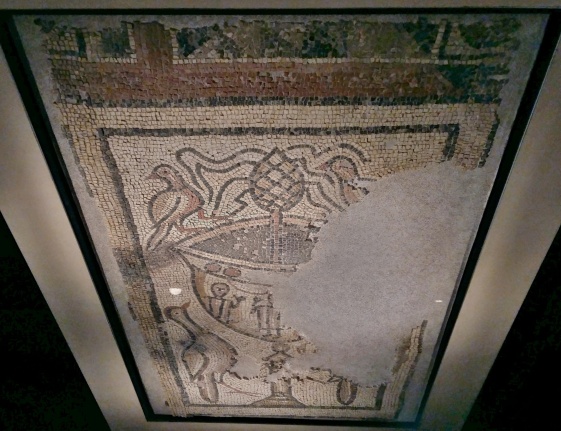 Mosaics of the same period can be found in the church of Tsromi.

In general, Greek and Roman examples affected the emerging ecclesiastical architecture of Georgia less than in Asia Minor, Syria and Palestine. More pronounced was the Sasanian influence.

A notable example of Georgian vernacular art at the Early Christian period are stone crosses and stelae. These were erected independently in the open air, taking an example of the wooden crosses that Saint Nino had erected on the sites of pagan temples. Christian worship initially took place at those stone crosses.

The Davati Stele, from the 4th or 5th century, is a notable example here. Its one side shows the standing figure of Virgin Mary and Jesus, while on the other side are images of Archangels Gabriel and Michael, with letters of the Georgian asomtavruli script carved between them. One of the reasons why the stele survives until this day is that it was later built into a column of a two-nave basilica. The image of the Virgin was positioned in the most visible part of that column, which suggests that the basilica was dedicated to her. 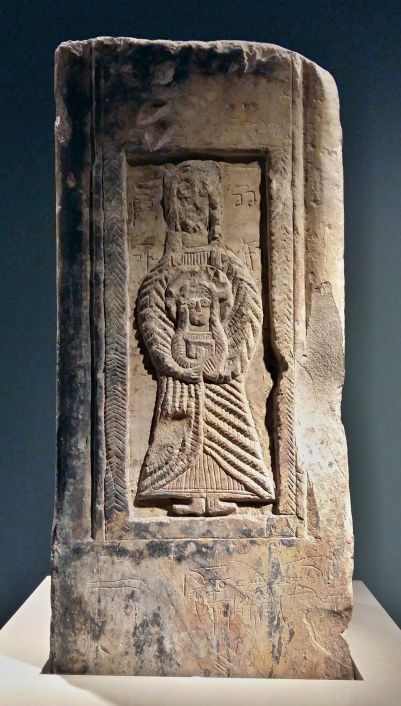 Famous are also the Khandisi Stele from the 6th century and the Kachagani Cross from the 7th century, the latter formerly topping a stele.

The later and more famous Armenian khachkars seem to be related to the Georgian stone crosses.