Western Ukraine was, at the beginning of the 20th century, a part of the Austro-Hungarian Empire. Together with Southern Poland it formed the Kingdom of Galicia and Lodomeria – a crownland of the Cisleithanian part of the Dual Monarchy. Its capital – Lviv (Львів in Ukrainian, Lwów in Polish, Lemberg in German, and לעמבערג‎ in Yiddish) – was the fifth largest city of the empire after Vienna, Budapest, Prague, and Trieste. It was a major centre of Polish, Jewish and Ukrainian culture. In 1900, Poles formed around a half of the city’s population, Jews around a quarter, and Ukrainians around one fifth.

At that time, Galicia was seen as one of the most peripheral regions of the Austria-Hungarian Empire, both literally and figuratively. Despite that, the contemporary trends that were transforming the cities in the western parts of the Habsburg Empire soon also found its way here. In architecture, for example, this is reflected by a large number of buildings in the style of Vienna Secession in the major East Galician cities. This, however, does not mean that nothing interesting originated from here. In fact, a highly unique architectural style known as the Hutsul Secession was born in Lviv in the 1890s and the 1900s. It sought inspiration from the Austro-Hungarian Secession as well as the art and architecture of the Carpathian highlanders, especially the Hutsuls. To me it is one of the most original substyles of European Art Nouveau.

The most important architect of the fin-de-siècle Lviv was Ivan Levynskyi. It was in his architectural firm that the designs of the most outstanding Secessionist buildings of the city were drawn. Furthermore, Levynskyi ran a ceramic factory, which was one of the most successful businesses of East Galicia and which also produced the majolica tiles that adorn many Secessionist façades in the city. An equally important representative of Lviv Secession was Tadeusz Obmiński. He often collaborated with Levynskyi, and he is the architect of the biggest number of buildings that I will introduce below.

In my porfolio you will find photos of 41 Secessionist structures in Lviv. It consists of five parts:

The list of buildings below is representative, but not comprehensive. The only major building in the style of Hutsul Secession that is missing in my portfolio is the gymnasium and student residence of the Ukrainian Pedagogical Society (Chuprynky St. 103). Other addresses with noteworthy examples of Lviv Secession include Antonovycha St. 83, Baroncha St. 5, Dontsova St. 8-14, Franka St. 124-132, Kurbasa St. 5, Nechuya-Levytskoho St. 17-19, and Vyshenskoho St. 12.

In the compliation of this portfolio, my two main sources were Lviv Interactive – a well-researched map of Lviv’s history – and Forgotten Galicia – one of the best websites about the historical Galicia and forgotten heritage in general that I know.

On the map below you will find the locations of all the buildings in this portfolio.

The Hutsul Secession was the first attempt to create a Ukrainian national style of architecture. Although it borrowed a lot from the various Secession movements of the Austro-Hungarian Empire, what was formative in its development was the influence of the vernacular architecture and art of the peoples of the Carpathian Mountains, most notably the Hutsuls. The folk element is what distinguishes it from all the other Secessionist styles present in Western Ukraine.

The most recognisable features of the Hutsul Secession are roofs with steep slopes and bold contours, reminiscent of the wooden churches of the Carpathians, and folk ornaments around doors and windows, most often in the form of bands and panels of ceramic tiles showing patterns and colours of traditional art. Lviv and Ivano-Frankivsk (Stanislaviv) were the main centres of this style, although examples of it could be found other places in Galicia as well.

Below I will introduce five notable examples of the Hutsul Secession in Lviv. These buildings were all designed in the bureau of Ivan Levynskyi.

The building of the Dnister Insurance Company is one of the best examples of the Hutsul Secession in all Ukraine.

The building is made up of two blocks, each with a courtyard and a separate entrance. The block on Ruska Street was meant for various public functions (offices, a school, shops, etc.), while the block on Pidvalna Street consisted of apartments.

The building has all the main features of the Hutsul Secession: high roofs with a tower, decorative stone and metal ornaments of folk inspiration, and bands, panels and inserts of ceramic tiles on the walls. The latter show attractive combinations of white, green and red colours and patterns typical of traditional Ukrainian embroidery. The ground floor has sandstone rustication, and there are Romanesque Revival windows on the third floor. An inscription on the attic on Pidvalna Street shows us the date of construction of the building, while a panel above the entrance on Ruska Street informs us of its purpose. 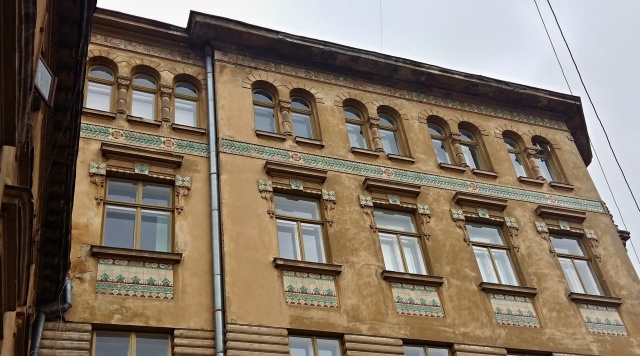 Many Hutsul elements can be admired on the inside as well, such as ceramic tiles of the floors, forged railings of the staircases, mouldings on the walls, columns and ceilings, etc. A ceiling painting with Art Nouveau floral motifs also survives (designed by Teodor Heleta). 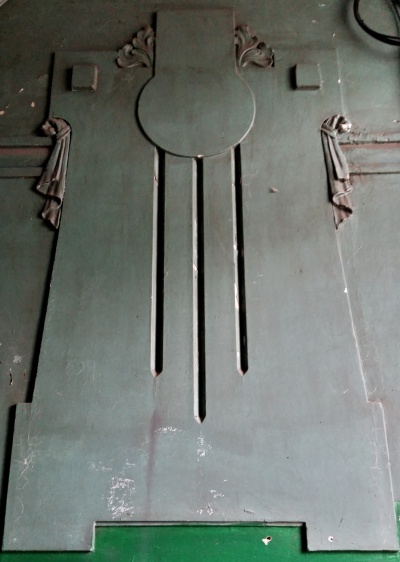 The building was one of the main meeting places of the Ukrainian community in Lviv at the beginning of the 20th century. It now serves as a clinic.

2. Residence of the deacons of the Cathedral of Saint George

This building served as the residence (bursa) of the deacons of the nearby Cathedral of Saint George, the mother church of the Ukrainian Greek Catholic Church. Photos of the original building show an attractive three-storey structure with a high roof and ceramic decorations above and under the first- and second-floor windows as well as under the eaves. The building looks dramatically different today, but some original bands and panels of majolica tiles with bright colours still survive.

This building served as a dormitory of Ukrainian students studying in Lviv universities. Its façade is more modest than that of the residence of the deacons of the Cathedral of Saint George and the building of the Dnister Insurance Company. The main decorative elements are the wooden constructions on the roof, inspired by the Zakopane Style, and friezes of majolica tiles with Hutsul ornamentation.

This building shows a rich assortment of metal elements of folk inspiration. Its roof has a complex shape. Some ceramic tiles can also be found on the façade. The building must have been much more attractive originally than it is today, as its façade was plastered white, which better highlights the decorative elements.

This building originally served as a health facility. It is named after its first owner – doctor Kazimierz Solecki. It shows the typical features of the Hutsul Secession, such as the complex roof solution and the bands and panels of colourful majolica tiles. The central avant-corps of the long façade is topped with a wooden sun motif – a characteristic of the Zakopane Style of architecture –, while the main entrance is more in line with the European Art Nouveau. 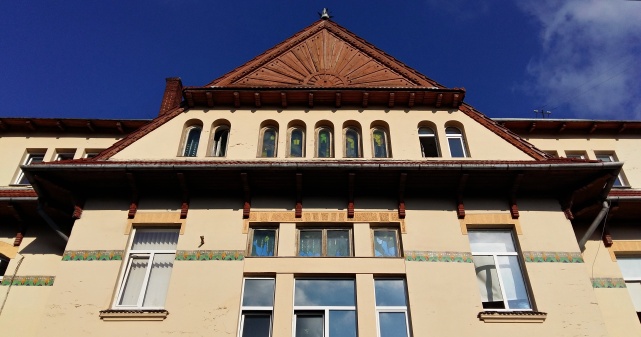 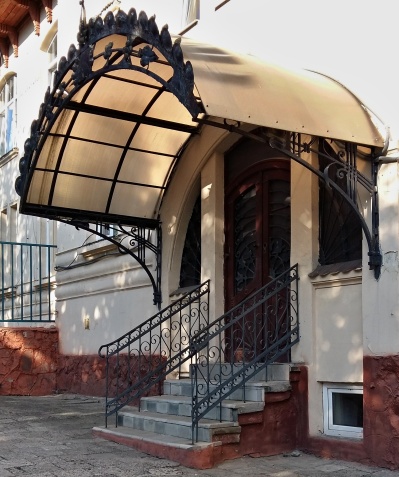