The attractive red-plastered building on the square on Szeroka Street served as a Jewish ritual bath for many years. Although its first mention is from 1567, the mikveh may have already existed in the late 15th or early 16th century, and the building which housed it may have been even older. The building was thoroughly modified in the 19th and 20th centuries, destroying most of its original features. The pool itself is in the basement of the building. The building now operates as a restaurant and a hotel.

At the northwestern end of Szeroka Street one finds a restaurant called ‘Once Upon a Time in Kazimierz’. It operates in four former Jewish shops, the separating walls of which have been torn down and the entrances of which are marked with restored signs from old shops in Kazimierz: Chajim Kohan’s general store, Szymon Kac’s tailor shop, Benjamin Holcer’s carpentry shop, Stanisław Nowak’s grocery store, Aron Weinberg’s haberdashery shop, and Abraham Rattner’s merchant shop. The interior of the restaurant is decorated Jewish paraphernalia. 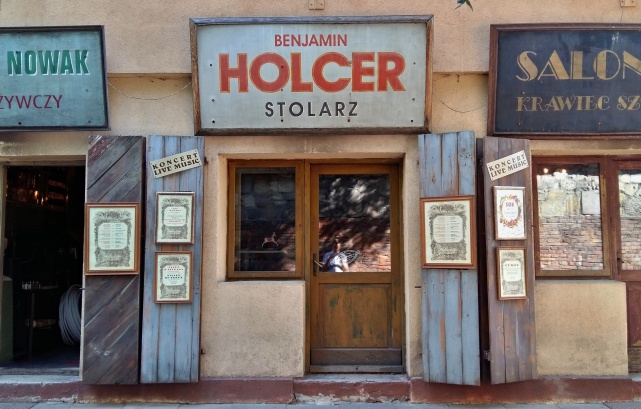 In the middle of Plac Nowy – the second main Jewish square in Kazimierz – is a rotunda-shaped building known as the Okrąglak in Polish. It was opened in 1900 as a market hall. In 1927 it was leased to the Jewish community, who turned it into a ritual poultry slaughterhouse. The building consists of an inner hall, a corridor around it and a ring of trading points surrounding it.

This residential building, located behind the Old Synagogue, belonged to the Bosak family, who lived here from 1633 until 1941. The black-and-white mural on its narrow side was created by Broken Fingaz, an Israeli group who found inspiration in the work of Ephraim Moses Lilien, the most famous Jewish artist of the Art Nouveau era. Lilien studied at the Academy of Fine Arts in Kraków.