Soluntum (today’s Solunto) was founded by the Phoenicians in the 8th or the 7th century BC. Its Punic name was Kapara, which means ‘Village’. It was contemporary with Ziz (later Panormos, or Palermo) and Motya – the other two major Phoenician colonies in Sicily –, and it remained one of the main Phoenician settlements on the island until the advance of the Greeks.

In Greek the city was called Solountinos, Solontinos, Soloeis, or Solous. The original city was located some kilometers east of Ziz, either on the southeast side of Mount Catalfano where today’s archaeological park is, or, more probably, at a lower elevation closer to the sea. It was destroyed in 396 BC by Dionysius I of Syracuse, after which it was rebuilt on the current spot by the Carthaginians. It remained in Carthage’s sphere of influence almost uninterruptedly until 254 BC, when it was conquered by the Romans.

The 3rd and the 2nd centuries BC were the highest point in the development of the city, now known as Soluntum or Solus. Its archaeological findings are almost entirely from this period, although a lot is still unexcavated. The remains constitute a good example of the mixing of Punic, Greek and Roman traditions.

The downfall of Soluntum began in the 1st century AD. Some centuries later the city was already abandoned.

The city of Soluntum did not need a continuous wall, considering its location on a steep slope of Mount Catalfano. There is evidence of some sections of the wall and towers.

The streets of the city are laid out following the Hippodamian (grid) plan. The main streets are about 6 m wide, while the width of the side streets is 3 m. They are usually paved with slabs of stone. It is not known when the Hippodamian plan was executed. Some findings indicate that the original plan of the city was rather irregular.

The city was accessed via two roads leading up to the hill. The road in the south terminates in the so-called Via dell’Agora, which was the cardo maximus of the city. 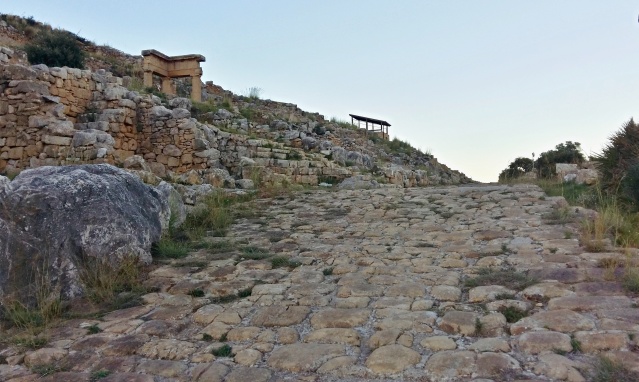 Because the terrain is very steep some streets have stairs.

As the name suggests, Via dell’Agora led to the forum. Here stood a stoa measuring 68.70 x 20.30 m. It was made up of Doric columns and had two side wings. Like the stoa of Segesta it had an unusual feature – the second floor. The upper floor was probably divided by semi-columns, which rested on a wall decorated with a diamond grid pattern (common in the Western Mediterranean). The original stoa was built in the 4th or 3rd century BC. The remains are from the 2nd century BC.

At the forum was also the theatre of the city. It was built in the 2nd century BC over an older house. It had a two-floor scaenae frons, with Doric columns on the ground floor and Ionic columns and the diamond grid parapets on the first floor. On pedestals there may have been two caryatids.

The forum was also the location of the bouleuterion, a gymnasium, a bathhouse, and a large cistern.

Behind the theatre and the bouleuterion stood the temples of Soluntum. They were all in Punic style.

From one of the temples survives a limestone statue of a seated goddess (Astarte, Tanit or Artemis), flanked by two sphinxes. It dates back to the second half of the 4th or the first half of the 3rd century BC.

At another temple was a 1.65-meter statue of the enthroned Jupiter or Baal. It is made of the local tuff, except for the face, hands and feet, which are in marble. The statue is from the second half of the 2nd century BC. The position of the right arm is probably a 19th-century reworking. 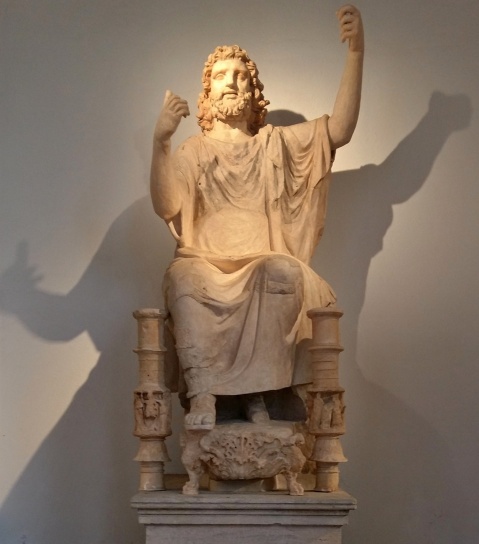 The both statues are now at the Regional Archeological Museum Antonio Salinas in Palermo.

The remains of the private houses are probably the most interesting sights at the archaeological area of Soluntum.

There were two types of houses: larger houses with a two-storey peristyle, located in the city centre, and smaller houses with a garden, located in the suburbs. The first type is especially important, as it appeared at the beginning of the 3rd century BC in Northern Sicily, from where it spread to the rest of the Greek world. The façades of the richer houses were decorated with columns and semi-columns. On the ground floor were shops, not connected to the rest of the house. The first floor was composed of rooms for living and entertainment. On the second floor were utility rooms such as a kitchen and a stable. Many houses had their own cisterns.

Houses south of the cardo maximus

Most of the houses were built of two types of stone: dolomite from Mount Catalfano and calcareous sandstone from nearby quarries. Typically, between large dolomite blocks small well-carved sandstone blocks were placed, and spaces were filled with smaller stones. Lower parts of the walls were generally composed of just dolomite blocks of different sizes.

In older houses, the technique of opus africanum was used, which means making up walls of a series of pillars and filling in gaps with loose stones. Another example of the Punic influence is the use of opus signinum on the floors, i.e. cementing small pieces of stones or tile fragments in lime or clay. Opus signinum originated in Carthage in the mid-3rd century BC, from where it spread to the other Punic towns in North Africa and Sicily.

The so-called Gymnasium is today the most visible structure along the cardo maximus of Soluntum. It got its name in the 19th century when an inscription referring to a gymnasium was found here. It is most likely that that inscription did not pertain to this building, which was, instead, one of the peristyle houses of Soluntum. 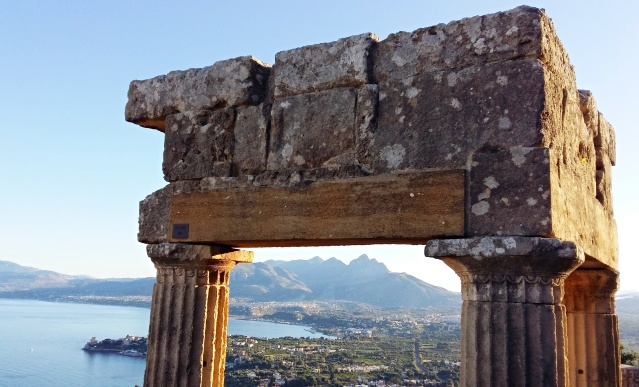 On the cardo maximus is another house with a two-storey peristyle: the House of Leda. The peristyle was made of twelve Ionic columns, of which only one is partially preserved. Some fragments of the diamond-grid decoration of the parapets also survive.

In the middle of the peristyle is a basin surrounded by a geometric mosaic. The basin collected rainwater and directed it to the nearby cistern.

In the middle of the floor mosaic of a room south of the peristyle is the oldest known representation of an astrolabe. It may have been created in Alexandria.

The triclinium of the house has relatively well-preserved wall paintings dating back to the 1st century BC. These consist of rectangles with an individual in the centre of each, including Leda with the Swan, after whom the house has been named. Murals are also preserved in other rooms. 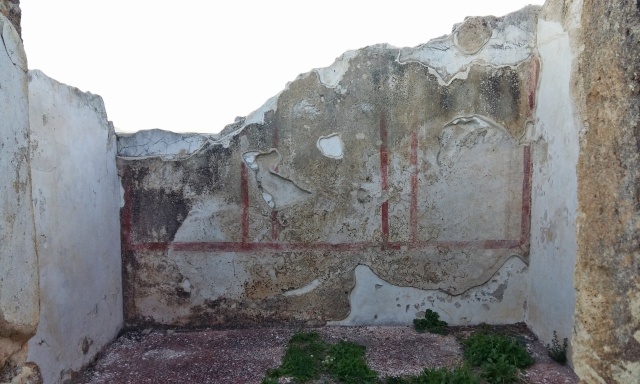 This house is named after a bronze statue of the Greek-Egyptian god of silence that was once found here. Like the neighbouring houses it has a peristyle, but here the peristyle is relatively small. The main room, the exedra, has a restored floor mosaic with meanders. Remains of murals as well as a staircase and a cistern are also visible. 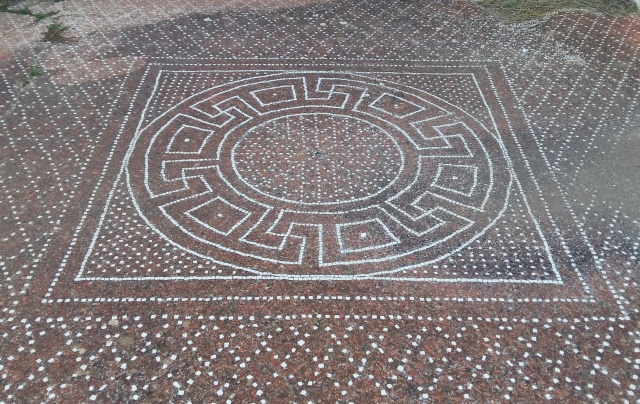 This house got its name from a big round mosaic framed by a meander in the oecus. In the tablinum there are bright-coloured wall paintings. The building is smaller than the typical peristyle houses of Solunto, and its plan is simpler.

There are at least two more notable houses in Soluntum.

The House of the Masks, located at the highest point of the city, got its name from a fresco depicting garlands from which hang theatrical masks. This magnificent fresco is from the 1st century BC and is now in the Regional Archeological Museum Antonio Salinas in Palermo.

The House of the Garlands, located in the northern part of the city, had murals depicting a row of candelabra with garlands, dating back to the Augustan period. One of the floors has a black-and-white diamond-shaped mosaic. The house also had a small decorated altar with the symbol of the Punic goddess Tanit.

The baths, dating back to the 1st century BC, are at the southern entrance of the city.

The necropolis of Soluntum is located south of the Santa Flavia railway station. Its body burials make it typically Punic. Burial chambers are carved into the rock. There are niches on the walls and in the floor. The tombs are mostly from the 4th and 3rd centuries BC.