Ferrara, even though not as famous as Florence or Rome for its Renaissance architecture, offers an equally rich collection of buildings from that period. The below portfolio contains the most outstanding examples of secular Renaissance in the city. Churches and monasteries would need a separate list. I took all the photos on November 25, 2016.

You will find the locations of all the buildings on the map below.

This moated castle is the symbol of Ferrara. It was commissioned by Niccolò II d’Este, Marquis of Ferrara, in 1385 to protect him from the town’s noblemen who had risen up against him over tax increases. Bartolino da Novara, the architect responsible for the construction of the castle, made use of a tower of the pre-existing defensive walls (the Torre dei Leoni). The building was connected to the residence of the Este family (now Palazzo Municipale) by an aerial passageway. By the reign of Duke Ercole I d’Este at the end of the 15th century, the defense functionality of the castle became less important, and it soon became the permanent residence of the rulers of the city.

The castle got its current external look after a fire that took place in 1544. The architect Girolamo da Carpi improved the towers and added to the medieval fortress terraces and balconies in white stone. The courtyard of the castle used to be fully frescoed. 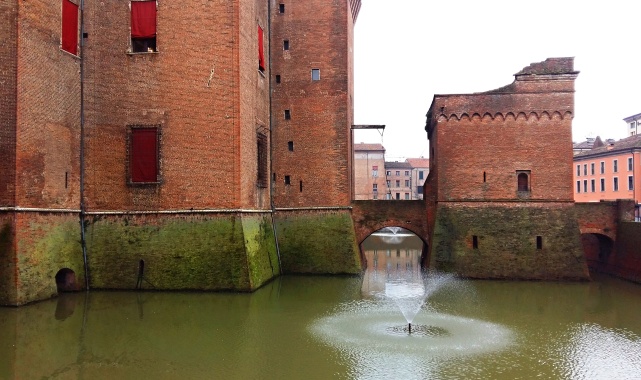 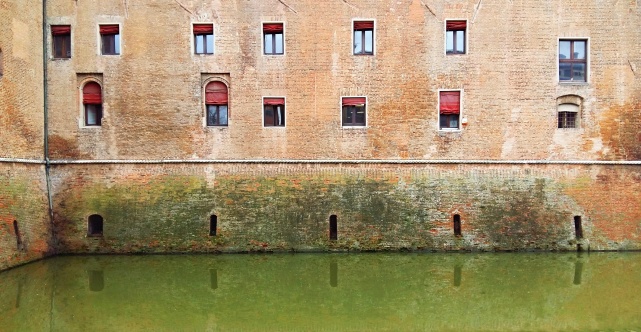 The palazzo was constructed in 1385 as a single-storey structure without wings for Alberto V d’Este, Marquis of Ferrara. It was meant for suppers and diversions only, an equivalent of a Roman villa suburbana. The name Schifanoia is thought to originate from ‘schivar la noia’, which means ‘to escape tedium’ in Italian.

In 1465-1467, under the commission of Borso d’Este, Duke of Ferrara, architect Pietro Benvenuto degli Ordini designed an upper level for the palazzo, providing the building with rooms suitable for receptions of ambassadors and delegations.

The façade was once topped with crenellations and was frescoed with fake polychrome marble. It has an elegant marble portal. 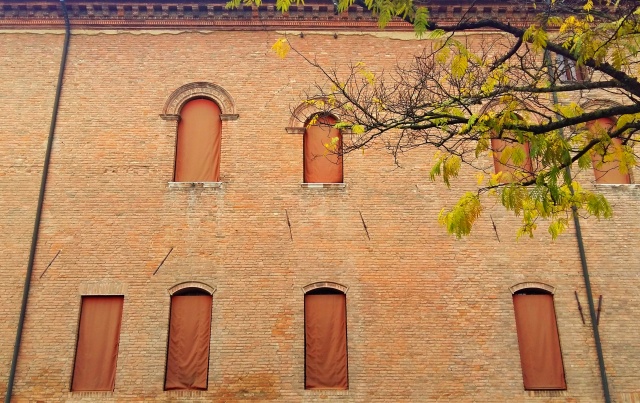 The most important parts of Palazzo Schifanoia are its upper-storey halls.

The Salone dei Mesi (Hall of the Months) hosts a fresco cycle executed in around 1469-1470 by different Ferrarese painters from the school of Cosmè Tura. It is one of the most important 15th-century fresco cycles in Italy.

The walls of the hall are divided into 12 sections, one for each month. (Today only seven of them survive.) Each month is divided into three horizontal bands. In the upper band, the world of the Roman gods is depicted. In the lower band, the world of man, where Borso d’Este is portrayed as a wise and fair governor, is painted. The third band is placed between the gods and men and depicts zodiac signs (testimony of the great importance held by astrology in the court of the Estes).

May: Triumpf of Apollo / Gemini (by Francesco del Cossa and others) 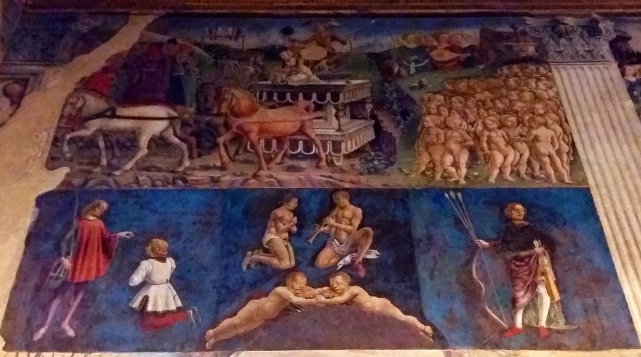 June: Borso d’Este hears a plea at a procession 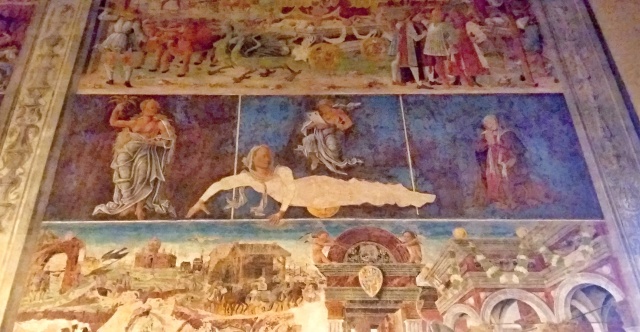 September: Borso d’Este at a parade 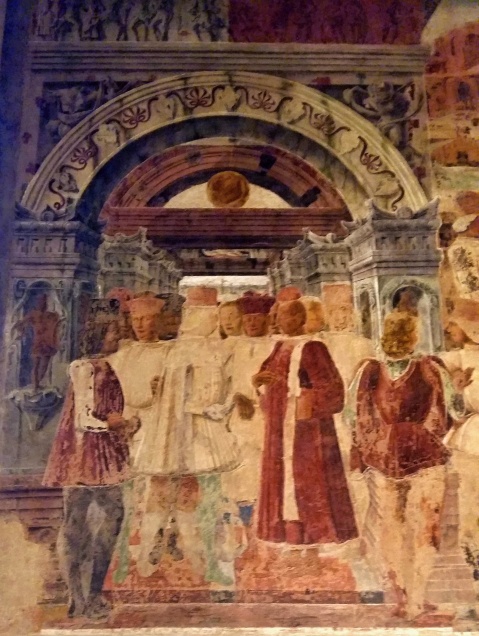 In the Sala delle Virtù (Hall of the Virtues), a sumptuous gold-painted panelled ceiling from the 15th century can be admired. The upper band of the walls is illustrated with figures of the virtues. Only Justice is missing. It was probably represented in a different form. 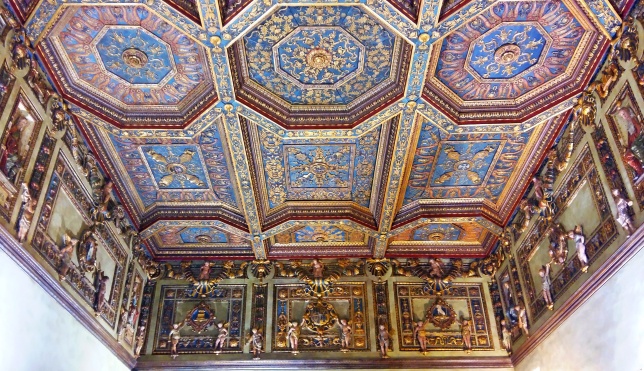 This lavishly decorated mansion was built for Giovanni Romei, a wealthy merchant and an administrator of the lords of Ferrara who had also married into their family. It has a peaceful cour d’honneur that combines the elements of the medieval architecture (the support of the loggia on the east) to those of the Renaissance (arches). It is dominated by a large monogram of Christ in terracotta, which is from the time after Romei’s death, when the house belonged to the adjacent Corpus Domini Monastery.

In the interior, in the Sala delle Sibille (Room of Sibyls) and the Saletta dei Profeti (Room of the Prophets), there are very elegant frescoes.

The Sala delle Sibille, named after the images of the sibyls on the walls, also has an original terracotta fireplace. There are also many beautiful coffered ceilings around as well as painted wooden walls from the 1460s and a hidden courtyard. All these make it the best preserved Renaissance building in the city. 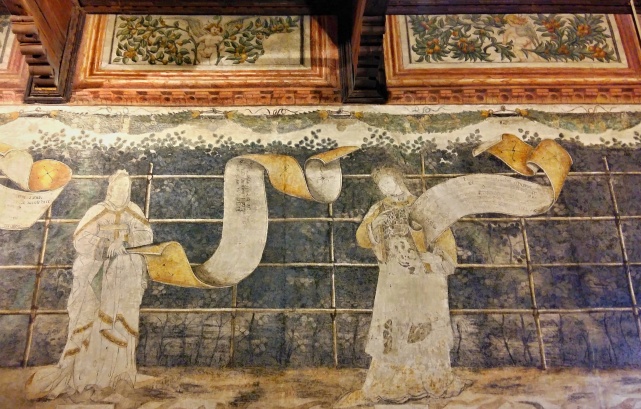 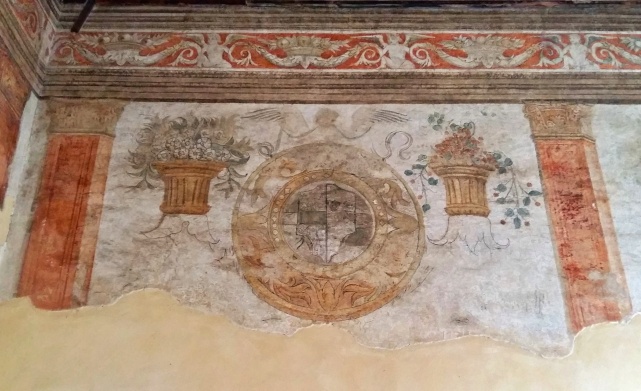 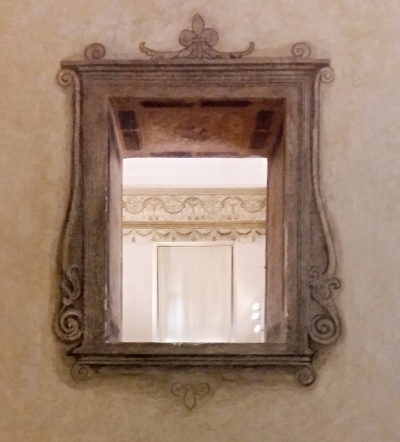 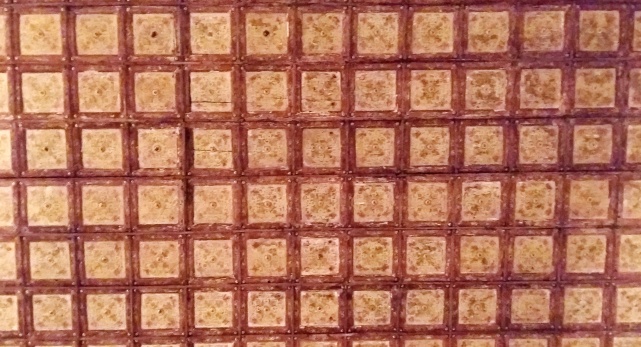 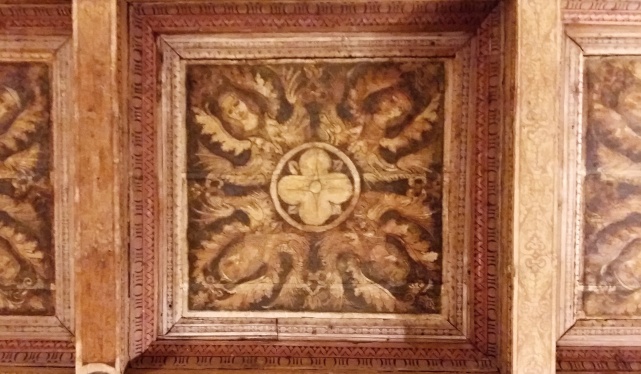 Biagio Rossetti was the court architect of the Duchy of Ferrara who, requested by Duke Ercole I d’Este in 1492, carried out the expansion of the city to the north. The expansion added to the city’s medieval centre a spacious orderly district. Rossetti constructed broad straight roads that were flanked with elegant buildings, monumental churches, and numerous green gardens. This major transformation, known as the Addizione Erculea, is considered to be one of the most important works of town planning in the 15th century. That is also why Ferrara can be thought of as the first modern city in Europe.

The focal point of the Addizione Erculea is the Quadrivio degli Angeli, where the cardo maximus and the decumanus maximus of the new city crossed. These are today’s Corso Ercole I d’Este and the avenue formed by Corso Porta Po, Corso Biagio Rossetti, and Corso Porta Mare.

This is the oldest building of the Addizione Erculea and one of the buildings that defines the axes of the Addition. It was built for Francesco da Castello, the personal doctor of Ercole I d’Este. Its most striking feature is the protruding marble portal that is decorated with angels and supports a balcony. The palazzo has undergone significant changes, especially in the 19th century, when the balcony at the corner of the Quadrivio degli Angeli was added. It belonged to the Sacrati family since 1690 and to the Prosperi family from the first half of the 19th century. 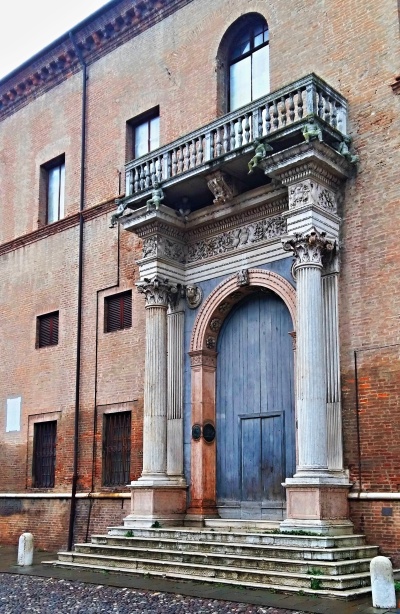 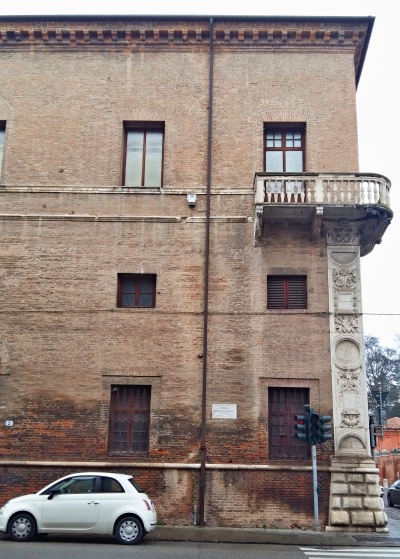 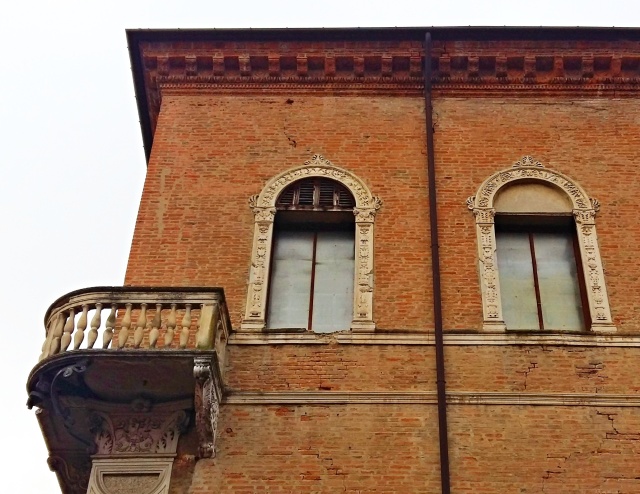 This famous building is the masterpiece of Rossetti. It is named after the white and pink marble blocks carved in the shape of diamonds adorning the bulk of its façade. The way the diamonds are positioned varies in order to maximise the light reflecting off the building. The candelabrum and the balcony at the corner stress the importance of the intersection at which the building is located. The palazzo was built for Sigismondo d’Este, the brother of Ercole I d’Este, Duke of Ferrara. It belonged to the Este family until 1641. 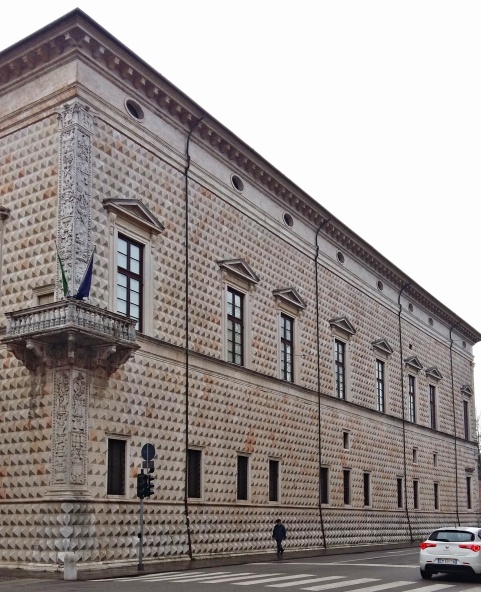 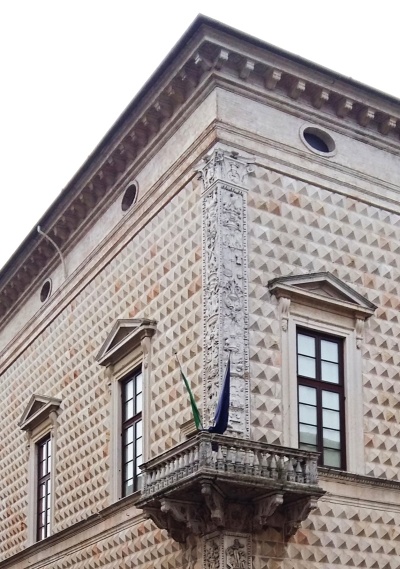 This palazzo was commissioned by Antonio Costabili, the ambassador of the Duchy of Ferrara at the court of Ludovico Sforza, the Duke of Milan. Its central point is the cour d’honneur, completed only on two sides and adorned with a double loggia with sculptural decorations in white stone. Today it houses the National Archeological Museum of Ferrara.

This house, located outside the Erculean Addition in the southern part of the city, was completed in 1502. It is very elegant, especially because of the delicate placement of the windows and the semicircular arch of the door, decorated with seahorses, shells and putto heads. The house belonged to the Rossetti family until the middle of the 17th century. 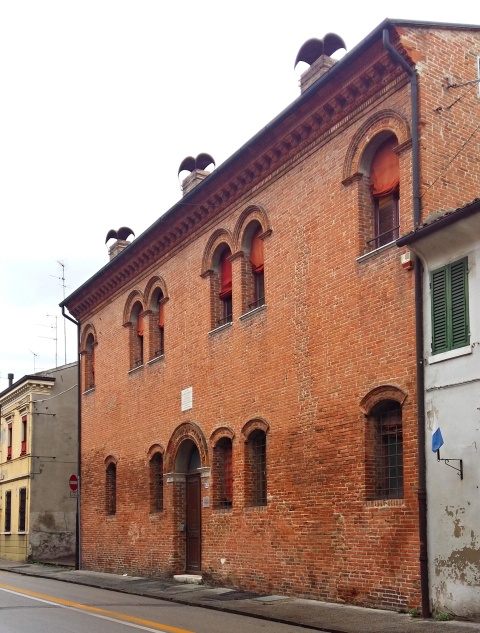 The city wall of Ferrara is, along with those of Lucca, the best preserved Renaissance city wall in Italy. It encircles the historic centre of the city for nine kilometres with almost no interruption. It boasts with gates, circular and semicircular towers, and four imposing bastions in the shape of a spadille.

The oldest parts of the wall are located in the north of the city. They were built during the Addizione Erculea in 1493-1505 and were designed by Biagio Rossetti. The section on the east was built on behalf of Duke Alfonso I d’Este, the section in the south by Alfonso II d’Este, and the southernmost part after the annexation of Ferrara by the Papal States. 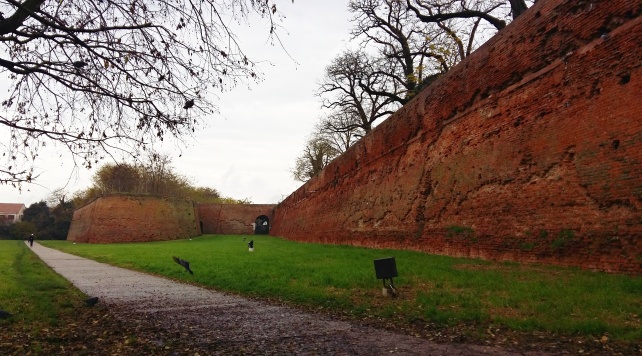 Ludovico Ariosto lived in Ferrara most of his life and served under the patronage of Cardinal Ippolito d’Este, his sister Marchioness Isabella d’Este and Alfonso d’Este, the Duke of Ferrara. This is the house where Ariosto spent his last years and prepared the final edition of Orlando Furioso. He bought the plot of land for the house in 1526 and for the garden in 1528. He moved in on Saint Michael’s Day in 1529. He died here in 1533. There is a description on façade in Italian: ‘The house is small but suitable for me, clean, free of expenses and purchased solely with my own money’. It belonged to the descendants of Ariosto until 1747.

This palazzo was built on the commission of Guliano Naselli, a canon of the Ferrara Cathedral. It looks quite different from the other Renaissance buildings in Ferrara. 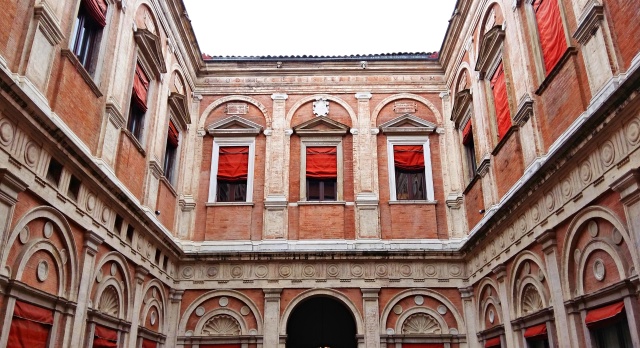 This palazzo is located in the area of the University of Ferrara.

This little palazzo is named after Marfisa d’Este, illegitimate daughter of Francesco d’Este (the second son of Duke Alfonso I d’Este and Lucrezia Borgia). It was inherited by Marfisa in 1578, and she lived here until her death in 1608. The palazzina was once surrounded by a magnificent garden that connected it to other buildings nearby. 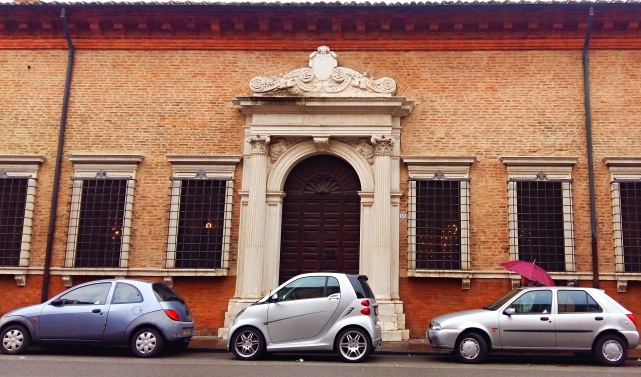 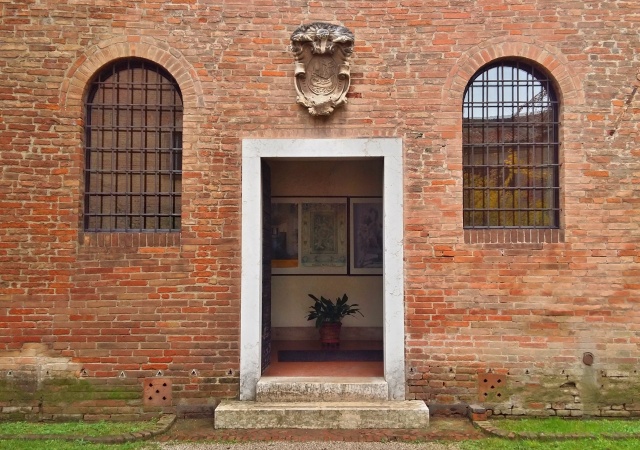 This palazzo was erected in 1391. It had originally one floor and four wings centered around a rectangular courtyard. Like a number of Quattrocento palazzi (such as Palazzo Schifanoia and Palazzo Belfiore), it was decorated with frescoes, here depicting scenes of court life and motifs from chivalric romances. In 1437-1438, when the Ecumenical Council of the Roman Catholic church took place in Ferrara, it housed Pope Eugene IV and John VIII Palaiologos, the Byzantine Emperor.

In 1567, the building became the seat of the various faculties of the University of Ferrara. Its appearance was also changed: the façade was moved to Via delle Scienze, where it is currently, and the upper floor and the white stone portal were added. The central tower is from 1610.

The building houses Biblioteca Comunale Ariostea, a historical library and archive, an anatomical theatre, and the mausoleum of Ludovico Ariosto.

This palazzo was built in 1468 and was given to Diotisalvi Neroni, a Florentine exile. The second floor and the central courtyard were added in the 16th century. In 1572, the palazzo was connected through gardens with the Palazzina Marfisa d’Este and the Palazzo Schifanoia. In 1643, it became the property of the count Bonacossi, who refurbished it with the touches of Baroque.

This palazzo is attributed to Alberto Schiatti, who worked in Ferrara in 1567-1583. Its architecture follows that of the Palazzo Naselli-Crispi (see the bossage of its portal, the triangular pediments of its windows, and the cornice). 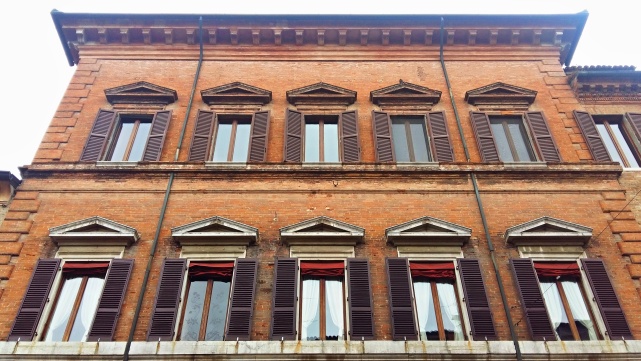 This palazzo with double windows was commissioned by Count Onofrio Bevilacqua and built in late 1591. It got its name from the Massari family, who bought the house in 1860.

I haven’t been able to find any information about the history of this building. 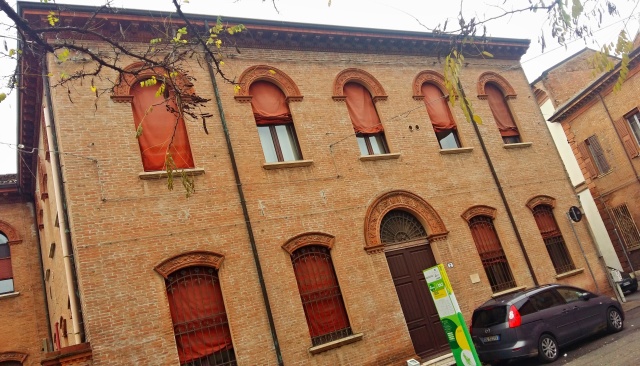 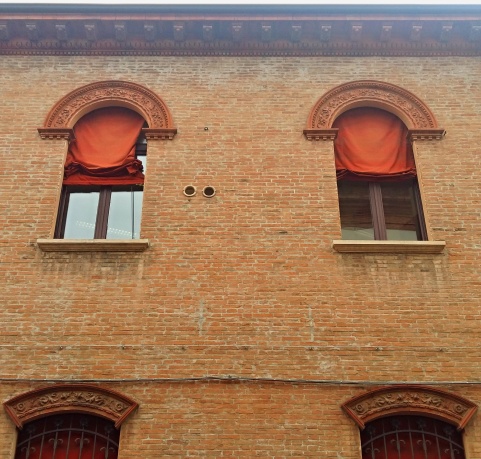 This palace got its name from Renée of France, the daughter of Louis XII, King of France, and the wife of Ercole II d’Este, Duke of Ferrara. She was a Catholic, when they married, but during her life in Ferrara she became an ardent supporter of the Protestant movement. For that she was put under heresy trial and her daughters were taken away from her. In 1554, she abjured her Protestant faith to be together with her children. After the trial she moved into the palazzo, which had been built in the 15th century. It now belongs to the University of Ferrara.