This semi-manor was established at the end of the 19th century. Since 1904 the owners were the Helmersens. The main building is a notable of example of Heimatstil architecture. It was the work of Rudolf von Engelhardt, who also designed the Neobaltia House in Tartu. 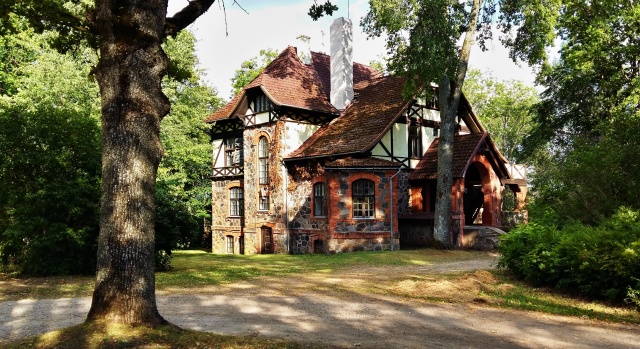 The history of the Olustvere Manor goes back to the Middle Ages. From 1742 until the Land Reform of 1919 it belonged to the Fersens. The surviving main building, designed by a Scottish architect, is from 1903. It is a Historicist structure, reminiscent of English country houses. Notable features include the timber-framed gable ends. 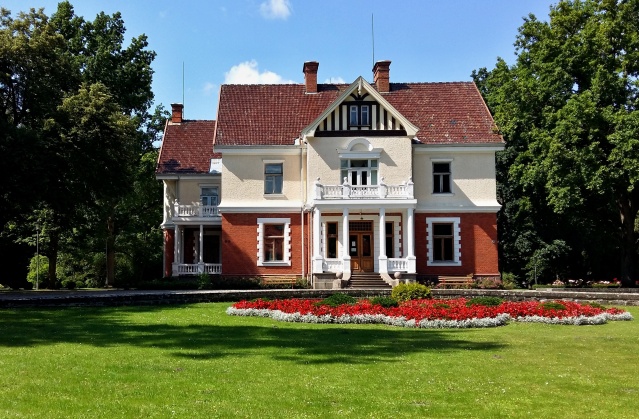 The most impressive room on the inside is the two-storey living hall with stairs and internal balconies. 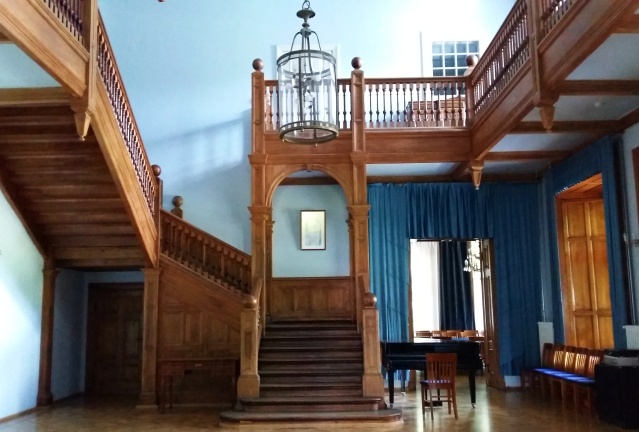 The living hall clearly dominates over all the other spaces in the main building. 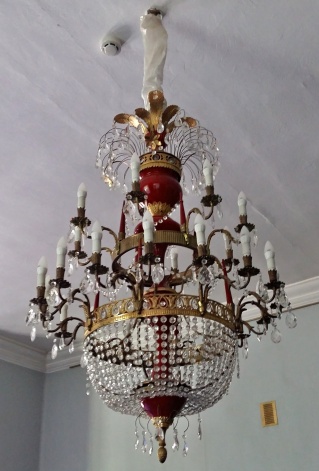 The main building is surrounded by a beautiful park, which is a work of Georg Kuphaldt, who designed and redesigned many notable parks and gardens in the Russian Empire around the turn of the century, including those of the Winter Palace, the Oranienbaum and the Tsarskoye Selo in Saint Petersburg as well as the Kadriorg Palace in Tallinn. The manor is notable for the multiple long alleys leading to its centre.

The steward’s house stands near the main building. It already existed in the third quarter of the 19th century, but it got its current look in the early years of the 20th century. 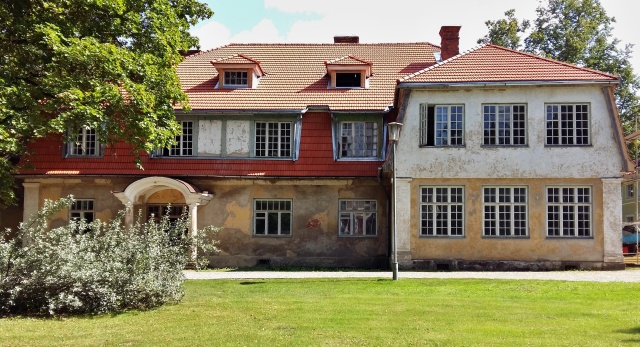 Many economic buildings of the Olustvere Manor survive in good condition. Its distillery and ox stable (both from the third quarter of the 19th century) are located on a beautiful spot next to a big pond.

This manor belonged, in the Middle Ages, to the City of Tartu, from whom its name is derived (Rat in German). In 1751-1919 it was owned by the Liphart family.

In 1783 the Lipharts built a Baroque main building here (plan by the French architect Fanguet). It was reconstructed in 1840-1842 in Renaissance Revival style. A unique feature from that time was a painting gallery lit not by windows but by a tower-like shaft. The last reconstruction took place in 1901-1905. To a wing of the building a second storey was added and a dome was constructed, with a library in Rococo Revival style under it. The interior was sumptuous everywhere. The Lipharts also had a huge art collection.

In the interwar period the main building was used by the Estonian National Museum and the University of Tartu. It burned down in 1944.

The manor stood on the shore of the picturesque Lake Raadi. Its park, which dates back to the mid-18th century, was one of the most impressive of the manor parks of Estonia.

The Neoclassical gatehouse was built in the first half of the 19th century. It was reconstructed in the late 1980s and early 1990s.

This manor was first mentioned at the beginning of the 15th century, when it belonged to the Buxhöwden family. Its Estonian name comes from the Nieroths, to whose ownership it went after the Livonian War. The Rehbinders owned the manor in the 19th century. In 1902 it was sold to Eduard von Kirschten, an entrepreneur from Saint Petersburg, who erected the current building. It is the most notable Art Nouveau manor in North Estonia, representing the early phase of the style. 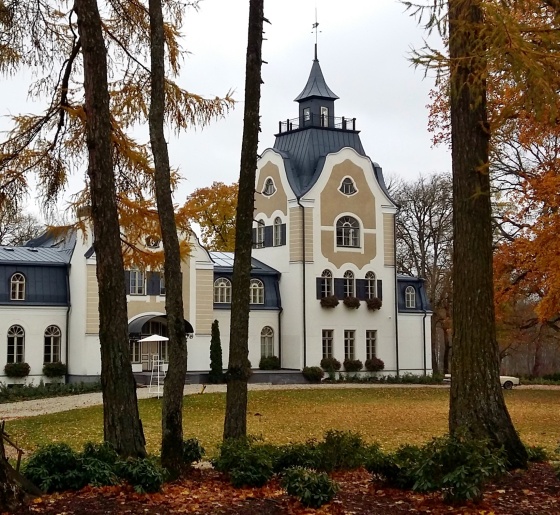 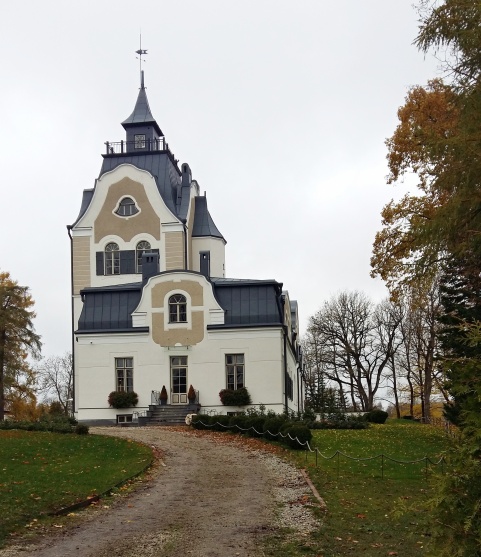 The surroundings of the manor are very picturesque.

This manor, located near the 16th-century Kiiu Tower, dates back to the end of the 18th century. At the beginning of the 20th century it was thoroughly renovated and got an Art Nouveau look. It belonged to the Stenbock family from the mid-17th century until the 1919 Land Reform. 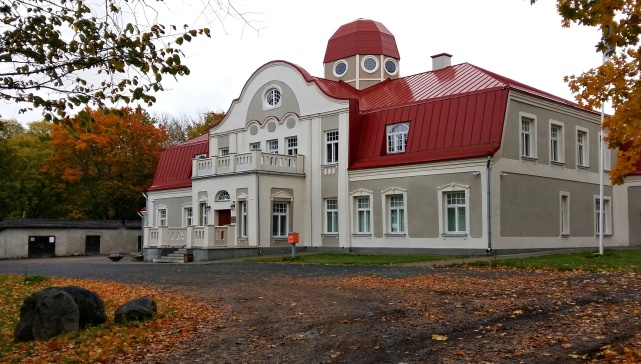 The Kehtna Manor was first mentioned in 1470, when it belonged to the Vietinghoff family. In the subsequent centuries it had various owners, but in 1777 it went back to the Vietinghoffs, who built a new main building here. Since 1824 the owners were the Benckendorffs. From them in 1874 it went to the Lilienfelds, who soon reconstructed the building in Renaissance Revival style.

The main building was set on fire during the 1905 revolution. In the subsequent years it was restored, during which it was given a Neoclassical look. It got a mansard roof, the main entrance was moved to the west, and the interior was endowed with rich stucco decoration. The main building is surrounded by a beautiful park. 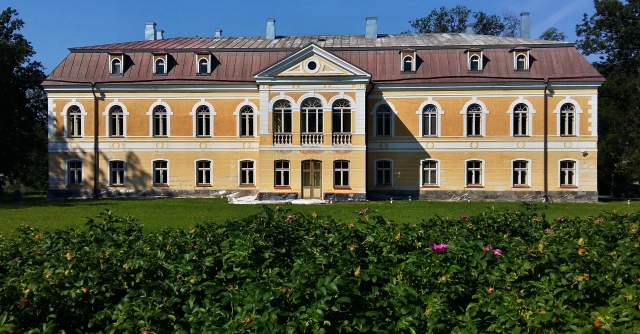 Viljandi
Second half of 18th century; enlargement – Otto Wildau, after 1907

The Kärstna manor was established in 1678, when it was separated from the lands of the Helme Manor. It belonged to the Anrep family from 1740 until 1919.

The main building consists of two parts. The older part is from the second half of the 18th century. To its narrow end a new wing was added in around 1900 (in Art Nouveau style). That wing got damaged in a fire that took place in 1907. It was subsequently restored, following a plan of Otto Wildau. The new building was Neoclassical, with minor elements of Baroque Revival and Art Nouveau styles.

In the cemetery of the manor, located on top of the Kärstna Hill, is a notable cast iron statue of a lion, dedicated to Heinrich Reinhold von Anrep, known as the Anrep Lion. It was created by Christian Daniel Rauch, the most important German sculptor in the first half of the 19th century. The statue is one in a row of a number of sleeping lions that can be found in Germany, the Czech Republic, and Poland.

This manor, located near the Latvian border, was established in the 16th century. Between 1630 and 1767 it belonged to the Hollers, after whom it got its name. The current main building was constructed when the owner was Woldemar von Ditmar. Its architect was Otto Wildau, who also designed the nearby Taagepera Manor and the Veckārķi Manor in Northern Latvia. Though less impressive than its neighbour, it is still one of the most memorable examples of Art Nouveau architecture in Estonia. The original plan included a small wooden tower, but it was eventually not built.

The Taagepera Manor was first mentioned in the 16th century. Its Estonian name comes from the Stackelberg family, who owned it from 1674 to 1796. From 1819 until the Land Reform of 1919 it belonged to the Stryk family.

The Taagepera Manor is one of the best examples of Art Nouveau architecture in the Baltic States. It shows great influence of Finnish National Romantic architecture. It is my favourite of all the manors in Estonia. 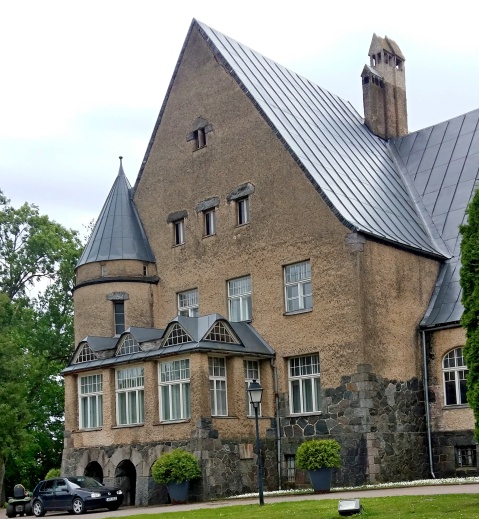 The most dominant feature of the building is the tower, up which it is possible to climb. 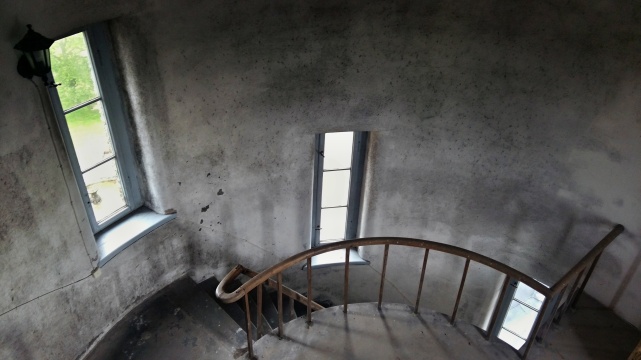 Some original Art Nouveau interiors survive. The most impressive of them is probably the vestibule.

The roof of the main building was originally made up of Belgian slate stones. These only survive on the gates (1910). 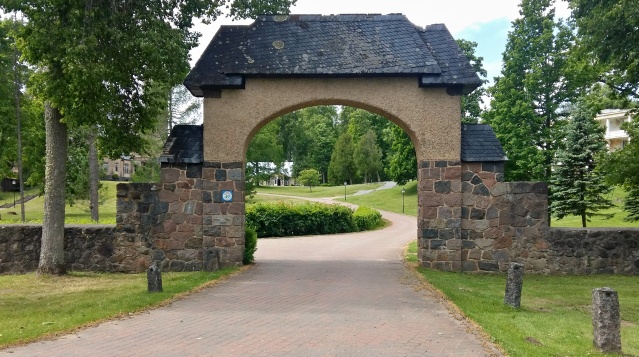 In 1922 the main building was converted into a sanatorium. A new sanatorium building was added next to it in the late 1930s. It was in Functionalist style and was designed by Alar Kotli, one of the most important Estonian architects of the 20th century.

This manor was first mentioned in 1552. Its last owners before the 1919 Land Reform were the Stackelbergs, to whom it had belonged since 1836. The main building was completed in 1912, using walls from the 18th, and possibly even the 17th, century. 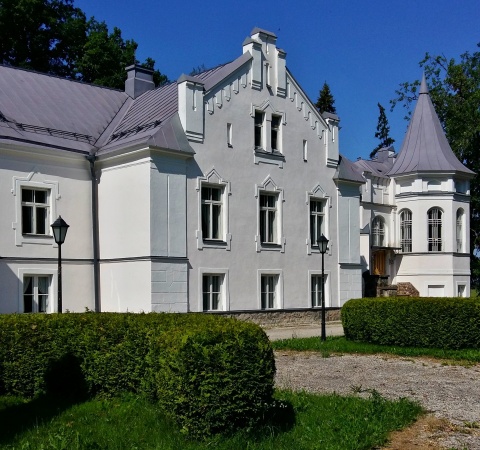 This manor belonged to the Bishop of Tartu in the Middle Ages. Its first mention is from 1515. From 1819 to 1919 it belonged to the Wulf family, who built a Neoclassical main building right after their acquisition. The main building was located on the coast of the Emajõgi. The current Heimatstil main building is from the early 1910s, using the walls of an older building.

The steward’s house across the street is from the first half of the 19th century.

This manor belonged to the Fersens since 1630 and to the Taubes since 1849. The old main building was burned down during the Russian Revolution of 1905. The current building was designed by Jacques Rosenbaum, the author of some of the most profusely decorated Art Nouveau buildings in Tallinn. It is in Baroque Revival style and has a rich stucco decoration of good quality. 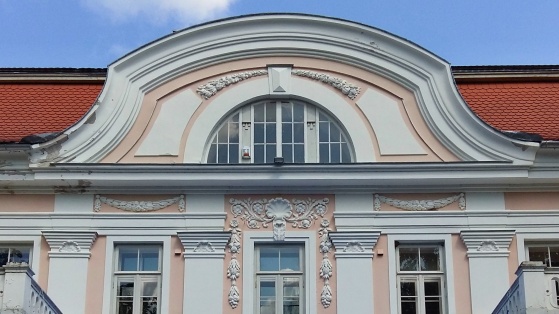 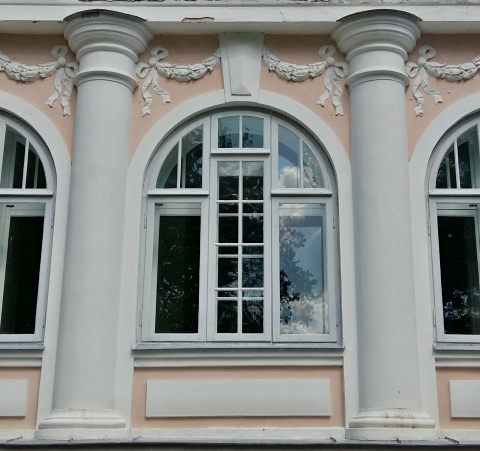 The first mention of the Kalvi manor is from 1485. Originally a big castle stood here. Its name comes from the Kalff family, who owned it in the 16th century. In the 1770s the east wing of the castle was converted into a Baroque residence. The whole structure suffered great damage in a fire in 1911.

The current main building is in a hybrid style, showing influence of English Tudor architecture. The façades, made of brick and limestone, are covered with thin plates of granite of irregular shape, which are assembled like a mosaic. The manor was then owned by Nikolai von Stackelberg and his wife Alexandrine von Schilling. The architect was Władysław Karpowicz, who was of Polish origin and worked in Saint Petersburg, specializing in the designs of summer houses.

The second most outstanding building of the manor complex is the smithy (from the end of the 18th or the 19th century).

The Jäneda Manor, first mentioned in 1510, belonged to the Benckendorffs since 1833. The surviving main building was constructed by Johann Ulrich Nathanael (Hans) von Benckendorff, after his marriage to Maria Zakrevskaya in 1911. It is a mixture of Gothic Revival and Art Nouveau styles. It has a slim corner tower, clean red-brick facades with few plastic details, and asymmetrically placed windows of different shapes. 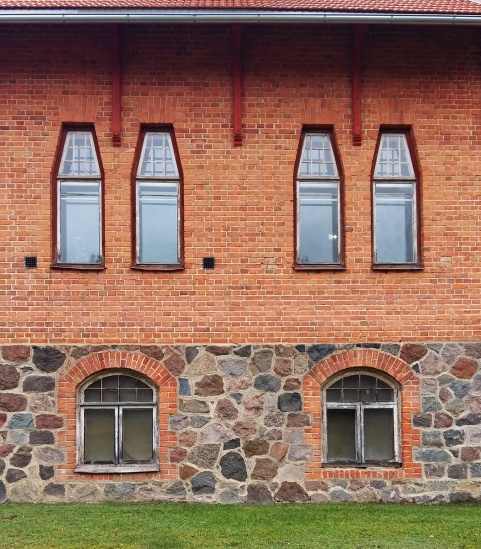 Of the other buildings of the manor, the granary in Gothic Revival style is probably the most interesting (from the end of the 19th century).

Maria Zakrevskaya-Benckendorff, later known as Moura Budberg, was famous for her love affairs with Maxim Gorki and H. G. Wells. The latter also stayed in Jäneda in August 1934. She was suspected of being a double agent for both the Soviet Union and the United Kingdom, which earned her the nickname of the Mata Hari of Russia.

2 replies to Manors of Estonia