The first manors in Estonia were established in the 13th century, after the Livonian Crusade, during which the area was conquered by Germans and Danes. In order to administer the acquired territories the rulers, following the principles of feudalism, granted the lands to their vassals, who were mostly of German origin. Other manors were established by the rulers themselves as well as by monasteries and convents for the management of their business activities. These first manors were mostly wooden. A minority were made of stone (i.e., fortified manors). The latter were a novelty in the Baltics, as the lime burning skills had only arrived here together with the Crusaders.

Over the subsequent centuries the number of manors increased gradually. Many suffered great damage or were destroyed during the Livonian War (1558-1583) and the Great Northern War (1700-1721). The latter war ended the century-long Swedish rule in Estonia and the region was ceded to the Russian Empire. The Russian rule marked the heyday of the manors. The Treaty of Nystad (1721) preserved the rights and privileges of the Baltic nobility, and their self-government was later even strengthened. Many Baltic noble families rose to be a part of the ruling elite of the country. In the 1760s the mass construction of manor complexes began, which lasted until the First World War. At that time the Baltic region was the most developed in the Russian Empire.

The manors were large estates with multiple buildings. The most important of these was the residence of the landlord. These were, in general, simple one-storey wooden structures until the mid-18th century, when they were replaced by more palace-like buildings. They represent all the architectural styles that were in vogue in Europe from the 17th to early 20th centuries: Baroque, Neoclassicism, all the versions of Historicism, and Art Nouveau. In front of the landlord’s residence was usually a circular driveway, or the ‘circle of honour’, which allowed the access of horse-drawn carriages.

The manors were essentially large economic units which, until the 19th century, specialized mostly on agricultural production. The buildings which guaranteed the functioning of the manor as an enterprise were usually located near the landlord’s residence, usually in front of it. The most important of these – the granary and the stable and carriage house – were often on the sides of the circle of honour. Nearby were the other structures: the steward’s house, the servants’ house, cattle sheds, smithy, kiln house, etc.

On the back of the main building was usually a garden or a park. In the 18th century French formal gardens were prevalent, while in the 19th century English landscape parks became more popular. There was almost always a pond, a lake or a river in the manor park (often artificially modified), together with bridges and pavilions.

The manor complex was bordered by a fence, with a gate across the entrance of the main building on the opposite side of the circle of honour. A tree-lined avenue usually led here through the surrounding countryside and is even today the first indicator of the location of the manor when one approaches it by car. To the manor also belonged the cemetery of the landlords.

There were 1026 knight manors in Estonia, as counted in around 1910. If one includes all the other types of manors, the total number is around 2000.

The manors were the centre of Baltic German identity and culture for many centuries. Things started to change in the late 19th and early 20th centuries, along with the rise of Estonian nationalism. Tensions between the Estonian peasantry and the Baltic German elite increased, culminating with the Revolution of 1905, during which angry mobs set on fire over a hundred manors. In 1919 the young Republic of Estonia carried out a radical land reform, which meant the expropriation of the Baltic German lands and their division into small peasant holdings. Only a few landowners were allowed to keep their residence and its immediate surroundings. Many Baltic Germans left the country, either after 1919 or during the Umsiedlung in 1939-1940.

During the first Republic of Estonia and the Soviet occupation after World War II many manors were in public use (schools, culture centres, nursing homes, etc). New settlements came into being and cultural life developed around them. Often the buildings were severely altered. Many were just left in a state of disrepair.

Today a number of manors have been renovated and operate as museums, hotels, or restaurants. A bigger number is still left in (sometimes very picturesque) ruins. Some are used as private residences, while others still have the same public function as they were assigned after 1919. A vast majority of them are protected under the Heritage Conservation Act.

Below I will introduce 76 manors from different parts of Estonia. I aim to give an overview of the development of manor architecture from the 13th to the early 20th century. This includes the main buildings as well as the auxiliary structures of the manors. Most of them were owned by Baltic German noble families, although there are some exceptions to this.  The list is representative but far from complete. Among notable omissions are the following manors: Ääsmäe, Ahja, Hiiu-Suuremõisa, Illuste, Järlepa, Keeni, Kiltsi (Ridala), Kumna, Kõue, Laitse, Mooste, Pädaste, Riisipere, Räpina, Taali, Ungru, Vasalemma, Vihterpalu, and Välgita.

In the creation of this portfolio I consulted, among other online sources, the Estonian Manors portal. Of great help, too, was the monograph about the Estonian manor architecture from Historicism to Art Nouveau by Ants Hein (Eesti mõisaarhitektuur: historitsismist juugendini, Tallinn: Hattorpe, 2003).

You will find the locations of the listed manors on the map below.

The Koluvere Castle was first constructed by the Lode family in 1234-1238. The oldest part of the surviving structure is the rectangular tower, which possibly dates back to some time in the 13th century. Probably in the 14th century a quadrangular building with a central courtyard was added to the tower. In 1439 it became a residential castle of the Bishops of Ösel-Wiek. The big cylindrical tower is probably from the second quarter of the 16th century.

In the 17th century the castle lost its military purpose. It became a manor in 1646, when Christina, Queen of Sweden, donated it to the Löwen family, in whose ownership it remained until 1771. Then it was sold to Grigory Orlov, the favourite of Catherine the Great.

After his death the manor went back to the ownership of the Empress, who used it to shelter Duchess Augusta of Brunswick-Wolfenbüttel before her death in 1788. She was the first wife of Frederick, the later Duke, Elector and King of Württemberg, and then the Governor-General of Eastern Finland. Their marriage was unhappy, with Augusta claiming that Frederick was bisexual and violent towards her. Because her father refused to give his permission for the divorce, the Empress sent Augusta to Koluvere. Here, she developed a sexual relationship with her custodian and became pregnant by him. She died during childbirth, because the child’s father refused to send for help in fear of his illegitimate relationship becoming public. She is buried in the nearby Kullamaa Church.

In 1797-1919 the manor was owned by the Buxhoeveden family. The Gothic Revival additions are from their time.

The castle is located on an artificial island in the Liivi River and is surrounded by a picturesque park.

Notable auxiliary structures include a hexagonal Gothic Revival water mill or turbine building from the 19th century. At the 20th century a small power plant was added to it.

This castle was the fortified centre of the Vao Manor. It was established by the Wacke family in the 15th century, although some researchers date it the late 14th century.

The edifice has four floors (from bottom to top: storage floor, business floor, residential floor, and defense floor). On each floor there is one room. The residential floor had a fireplace, a lavatorium and a dansker. The lower two floors are covered by vaulted ceilings. Stairs connect the floors. The entrance to the cellar next to the main entrance is probably of later origin. 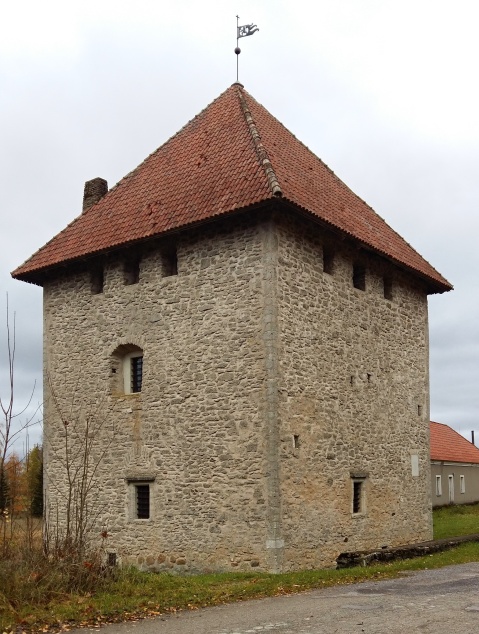 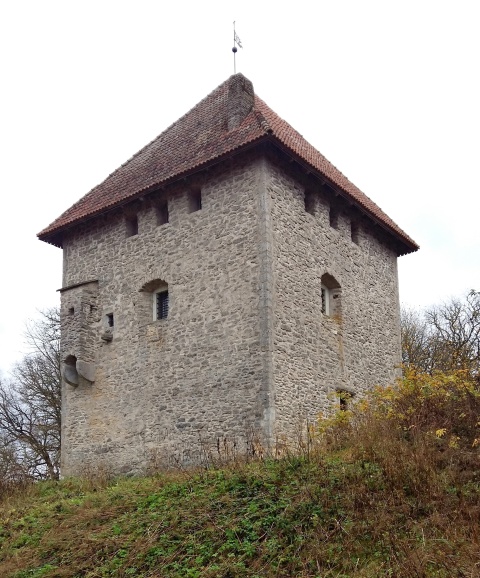 The structure was used as the main residence of the manor until the 1770s, when the Rennenkampffs moved in to a new building.

There may be an underground passage leading from the Vao Castle to the nearby Kiltsi Manor.

The Kiiu Tower was built in around 1520 as a fortified residence of the Tiesenhausen family. It is the smallest castle in Estonia. It consists of four floors. The ground floor and the upper two floors were used for defensive purposes, as shown by the embrasures. The presence of a bed niche, a fireplace and a dansker on the first floor indicates that it was residential. The ceilings of the rooms on the lower floors were vaulted. The wooden hoarding that can be seen around the second floor is very rare in the Baltic States. The tower was accessed through a courtyard surrounded by a limestone wall.

The Purtse Manor was first mentioned in 1421. The surviving structure was probably built by the Tuve (Taube) family in the 1530s. It is one of largest fortified residences in Estonia, representing a transition from a medieval castle to a Renaissance palace.

Püssi Manor. They turned it into a support manor, using it mostly for grain storage.

1 reply to Manors of Estonia