The Orthodox Synagogue on Kazinczy Street is the most important public building that the Löffler brothers designed in the 1910s. It is late-Secession early-Art Deco and reveals the influence of the Parisiana club, designed by their master, Béla Lajta. The main façade reflects the orientalistic traditions of Central European synagogue architecture and foresees Art Deco’s attraction to the exotic. It is clad in brick and coloured artificial stone. The quotation inscribed in Hebrew under the moulding sill reads: ‘This is none other than the house of God, and this is the gate of Heaven.’ As for the interior, the furnishing are unusually cheerful, but the colours are not original. The vaulted windows were made by Miksa Róth. 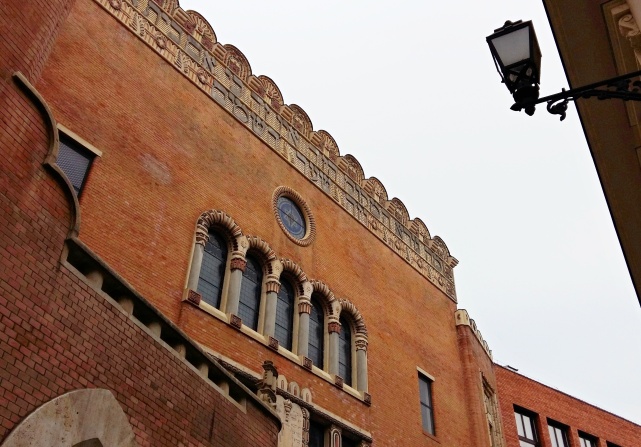 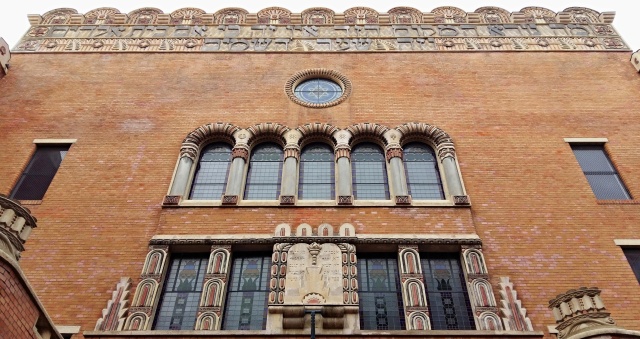 The Wekerle Estate is a garden city located in the suburb of Kispest. It is named after Sándor Wekerle, the prime minister of the Kingdom of Hungary at the time when its construction was launched. The idea for the development came from architect József Fleischl.

The streets of the estate are rationally arranged and form a spider-web-like structure. The avenues are tree-lined. In the centre of the estate, there is a large square with a park.

The design of the buildings follows the Transylvanian style, established by Károly Kós. Many high roofs and wooden structures strike in the eye. A lot of buildings also show the influence of Art Nouveau. 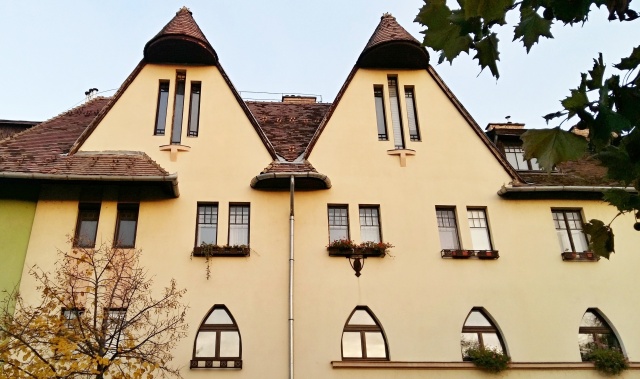 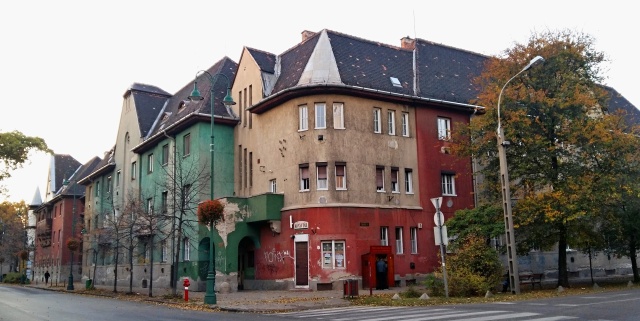 This German-looking building is located in a villa district on the Buda side.

This building was originally constructed as the headquarters of a bank. It also had shops on the street level, a kindergarten of the employees of the bank on the side of the Deák Ferenc Street, and some rental apartments on the top floor. It now houses an H&M department store, making it one of the most beautiful fast-fashion stores in the world.

The façade of the building has a rich plastic decoration executed in the workshop of Géza Maróti. The stained-glass windows were made by Miksa Róth. The foyer, the meeting hall and the wooden doors were prepared following the designs of Ödön Faragó. Ignác Alpár, its architect, is the author of many other notable buildings, such as the Vajdahunyad Castle, the Anker Palace and several banks in Budapest, as well as a number of structures in the province, most notably in Transylvania.

This massive building is located a few steps away from the Rumbach Street Synagogue. 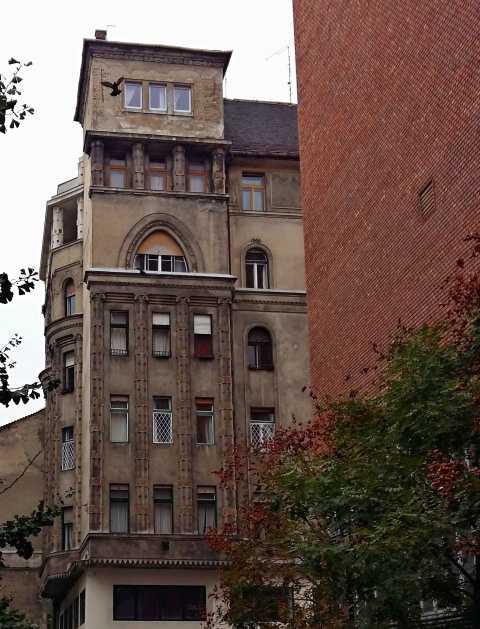 This building with a curved corner is one of the most outstanding works of the late phase of the Hungarian Secession. It is also one of the last works of Ödön Lechner. The stylized coat of arms of Hungary can be seen on the façade, together with Hungarian folk motifs and some eastern elements. From the street, only corridors can be seen. There are no classrooms that have a street window. Many Hungarian celebrities have been students here.

This huge U-shaped building is adorned with colourful mosaics. It is one of the most interesting late-Art Nouveau buildings in the city. 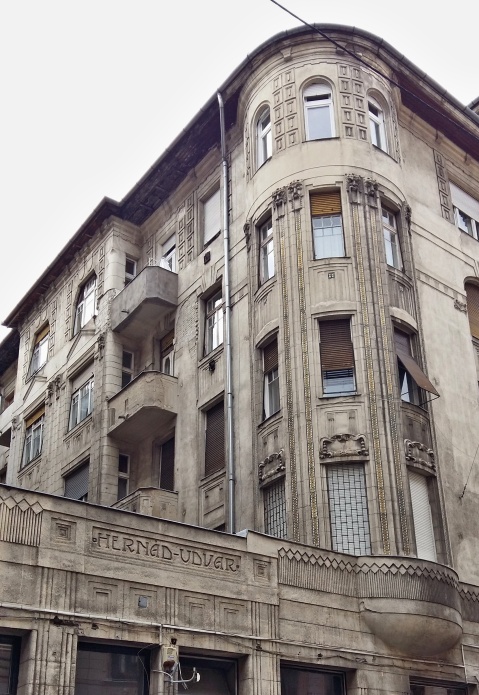 References to healing waters in this location date back to the 13th century. In the Middle Ages a hospital was located here. During the reign of the Ottoman Empire, there were baths here known as Sárosfürdő (‘muddy bath’), because of the mineral mud that settled at the bottom of pools.

The current building is from 1912-1918. It is big, late-Secessionist and has rustic domes. The interior is richly decorated with sculptures, mosaics and stained-glass windows. The walls of the thermal bath areas are covered with colourful Zsolnay porcelain. In the men’s thermal bath there are figures of kissing children by Miklós Ligeti. There are swimming pools inside and outside. The lobby and the inner swimming pool are covered by glass roofs.

This is the most beautiful bathhouse that I have ever visited. 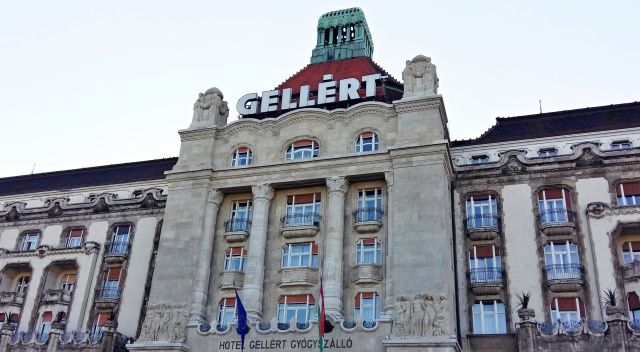 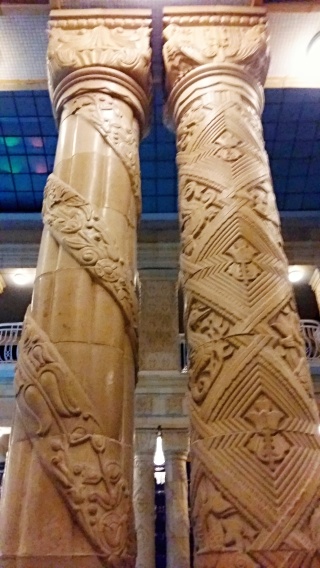 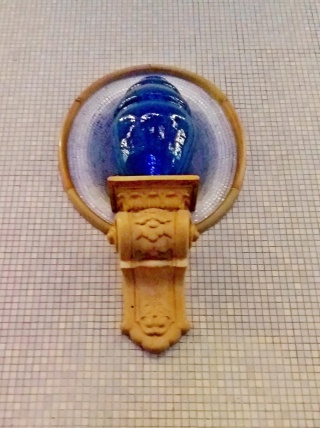 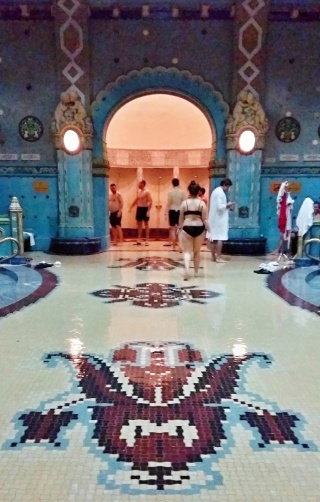 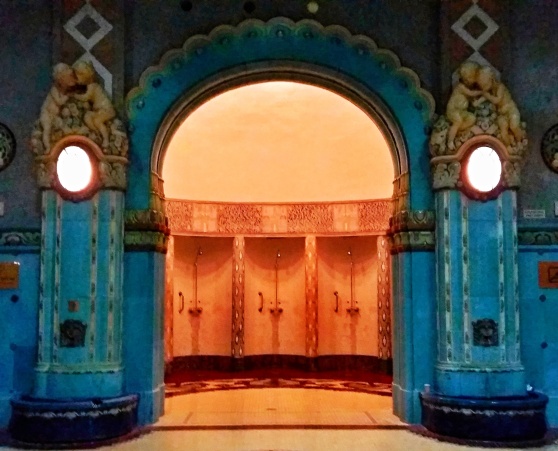 I haven’t been able to date the following buildings.

This façade has some mascarons announcing the arrival of Art Nouveau.

These apartment buildings form a whole with their rows of pilasters decorated with mascarons. 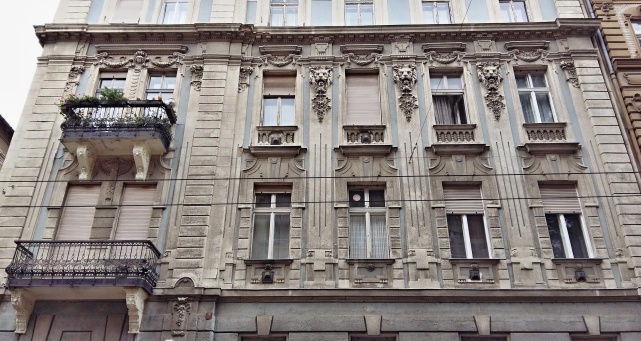 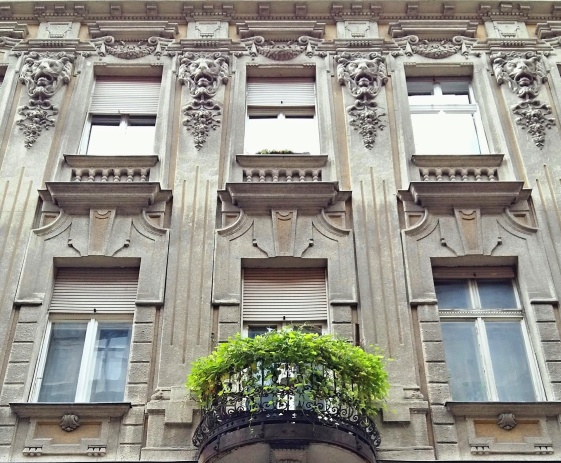 This apartment building is decorated with abundant rectangular motifs and has very interesting balconies.

The bulging window frames and the trapezoid roof-floor solution are interesting.

This building is located in a notorious red-light district of the turn of the century. It housed a brothel, which must have been familiar to writer Gyula Krúdy, who lived around here.

The upper part of the façade contributes well to the general vertical accent of this building.

The MÁV Estate was created for railway workers in the Rákospalota neighbourhood in the early-1900s. Some façades show influence of Art Nouveau.

Below Secessionist funerary art of Budapest is introduced.

116. Arcades of the Kerepesi Cemetery

The cupolas of the arcades in the Kerepesi Cemetery are adorned with mosaics by Miksa Róth, Aladár Körösfői-Kriesch, Andor Dudits, János Stein, and  Zsigmond Vajda.

The Jewish cemetery on Kozma Street has many wonderful Art Nouveau tomb stones. The most interesting of them is the tomb of Schmidl family, designed by Béla Lajta, possibly together with Ödön Lechner, in 1903-1904. Lajta’s work before 1905 clearly shows Lechner’s influence in terms of the dynamic handling of mass and the powerful polychromy. This is the most unusual funerary monument that I have ever seen. 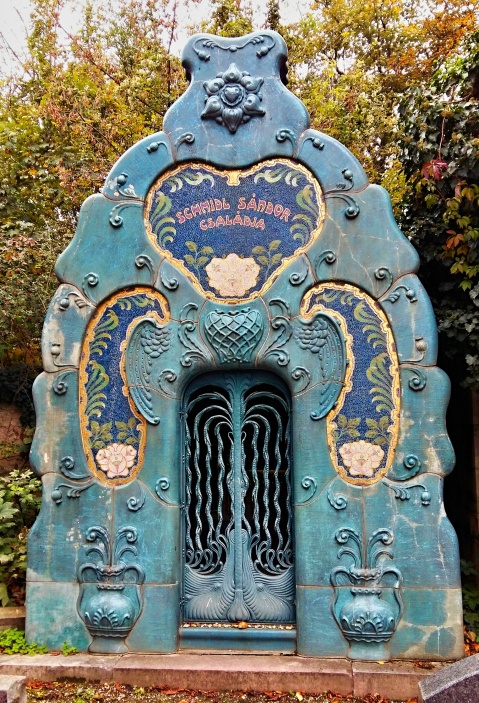 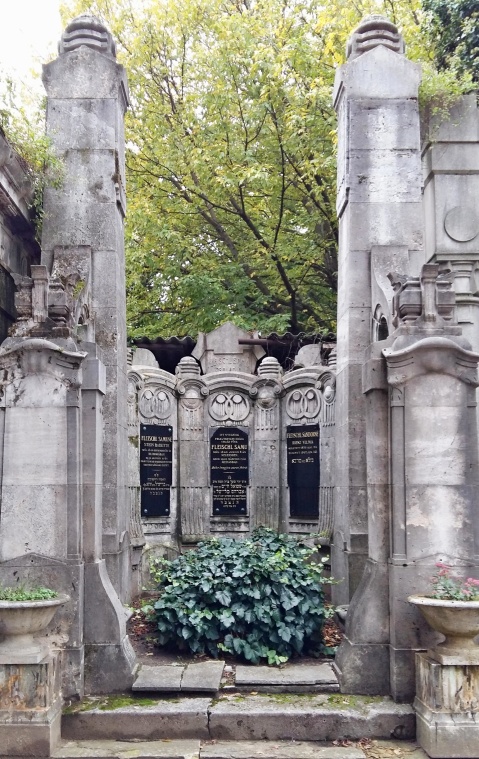 Miksa Róth’s stained-glass windows and mosaics can be admired all over Budapest, starting from the most important structure in the city – the Hungarian Parliament Building. I have already mentioned his contribution in some buildings listed above. Many of his works are scattered around the current and former territories of Hungary, notable examples including the City Hall of Szabadka (Subotica, Serbia) and the City Hall and the Palace of Culture of Marosvásárhely (Târgu Mureș, Romania). 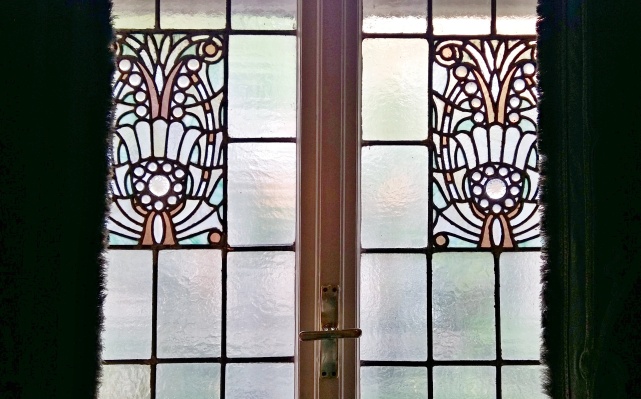 In Budapest, some of the best examples of Miksa Róth’s art are showcased at a small museum operating in a house where he lived since 1910 (Miksa Róth Memorial House). Below are photos of some notable Art Nouveau stained-glass windows and mosaics from the collection of that museum (all designed by Róth). 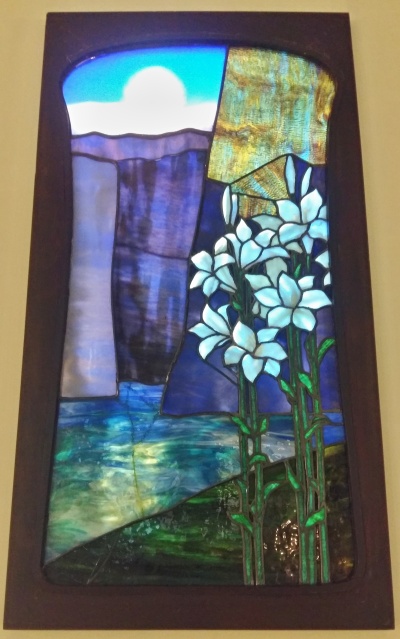 Opalescent panel of a screen
(1900; commissioned by Lajos Freisinger) 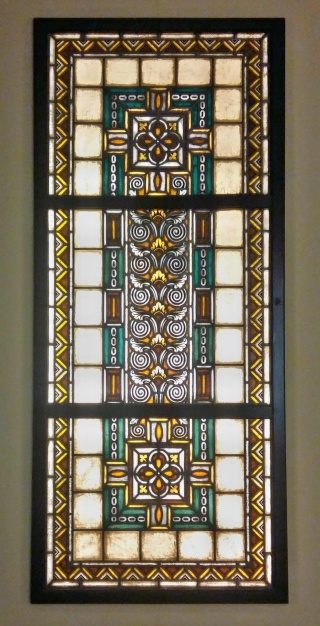 Portrait of a Girl
(around 1910, based on a design by Sándor Nagy)

The following four Secessionist mosaics were shown at the 1900 Exposition Universelle in Paris. Here Róth innovated Hungarian mosaic art by using the opalescent Tiffany glasses as well as the glazed elements produced by the Zsolnay Porcelain Manufacture.

Mosaic with Tulips (before 1900)
Example of Hungarian Secession; hand-painted porcelain flowers in Hungarian style are placed on a base consisting of eosin-glazed tesserae (cf. Ödön Lechner) 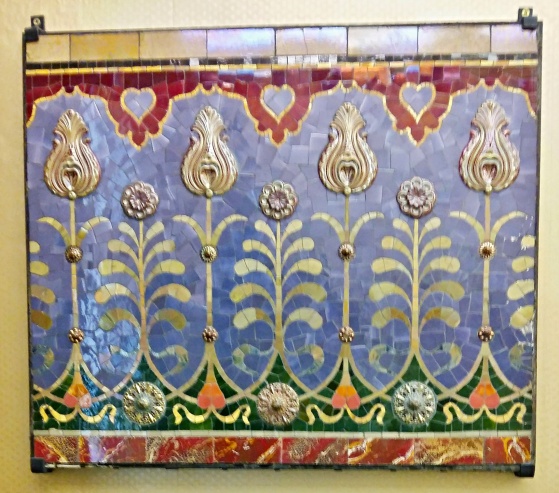 The Tree of Knowledge with Pomegranates (1898)
The pomegranates project from the plane and the eosin colours glitter vividly. 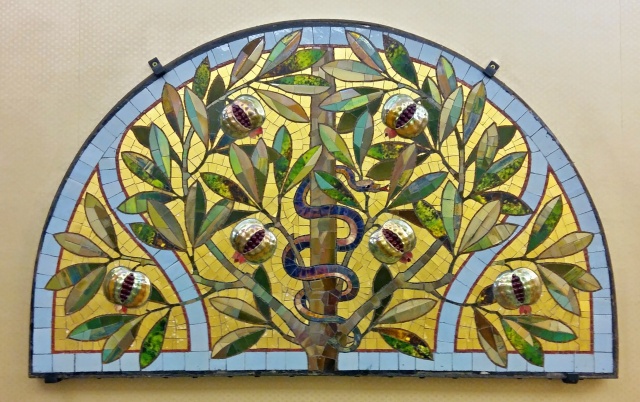 Pax (1898-1900)
This mosaic was awarded the Silver Medal at the Exposition Universelle in Paris.

Mosaic with Lambs and Excerpts from the Psalms (1910)

In this mosaic, Róth placed gold leaves between different layers of glass and put a glass on the surface. The uneven surface was then coated with a schwarzlot finish, which further increased the contrast. Schwarzlot is a technique that had been used since the Middle Ages, and Róth expected it to be adopted in the contemporary Hungarian ecclesiastical art. It did not find any followers, however, which makes this mosaic unique. Róth was very proud of this work. 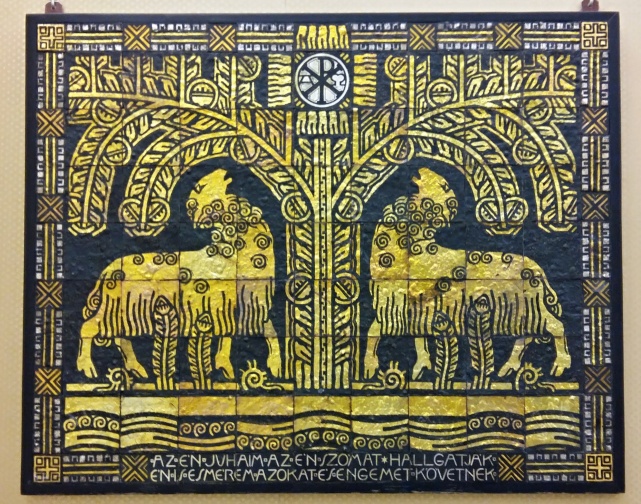 Finally, some other museum pieces are given.

From the exhibition Lechner, a Creative Genius of the Museum of Applied Arts 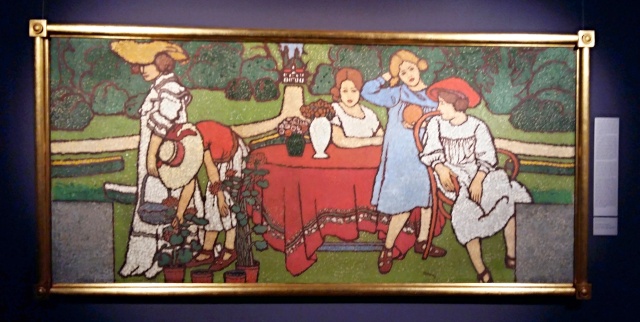