In this portfolio, post-Secessionist architecture of Budapest is introduced. The portfolio covers the period between 1909 and 1942 and is made of photos of Art Deco and Bauhaus (International Style) buildings.

These two styles are quite different from each other, and I originally wanted to create two separate portfolios. However, as Art Deco is a very general term, I saw that there are some buildings that fit well under the both categories. So I decided to introduce the buildings from the last years before World War I that could not be described as Secessionist together with those of the interwar period, not making a clear separation between the styles.

When it comes to the Art Deco architecture of Budapest, my guide was the 2015 book Budapest Art Deco by Dániel Kovács and Attila Gulyás. Some descriptions below refer back to this publication.

The collection is relatively complete, but it misses some outstanding buildings of the period, such as the power plant in Kelenföld and the villa by Farkas Molnár on Lotz Károly utca 4/b.

The photos are arranged chronologically. I took most of them in February and March 2017. Some are from April, September, and October 2015.

You will find the locations of all these buildings on the map below:

This building is an offspring of Hungarian Art Nouveau, but the geometric motifs, reliefs and the zigzag railings of the balconies are Art Deco. Its archaic appearance resembles the Orthodox Synagogue on Kazinczy utca, designed by the same architects. 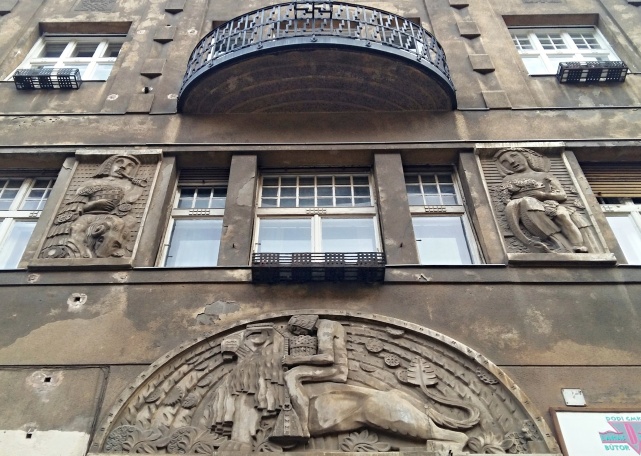 The strong vertical stripes dividing the brick façade are reminiscent of Alfred Messel’s Wertheim Department Store in Berlin. The carved decor on the monumental stone slabs framing the entrances shows the impact of Wiener Werkstätte.

This Neoclassical building with a glass façade and exotic pilasters housed the offices of the Goldberger Textile Factory. 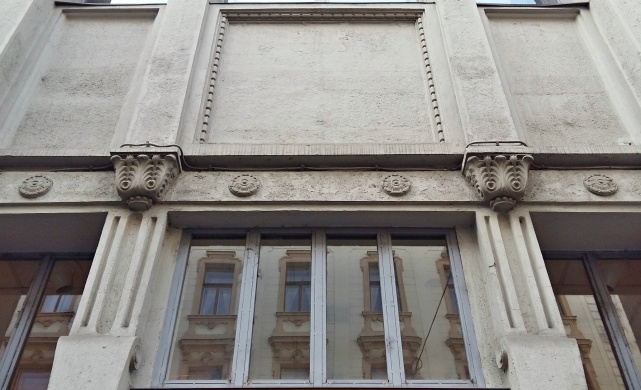 This building was designed by Béla Lajta, the most prominent Hungarian architect of the time. Its lower floors, where the offices were located, have massive columns that support the upper-floor apartments. Above, between the central windows, there are elegant terracotta inserts decorated with folk motifs. The retracted roof is also covered with stylised motifs.

The focal point of this building is the elevated corner under which there is a steel-frame corner balcony covering four floors. Richly carved wooden panels on the ground floor establish an interesting contrast with the undecorated floors above. Some of the original furniture and decor is still left in the bank on the ground floor (highly recommended to visit). 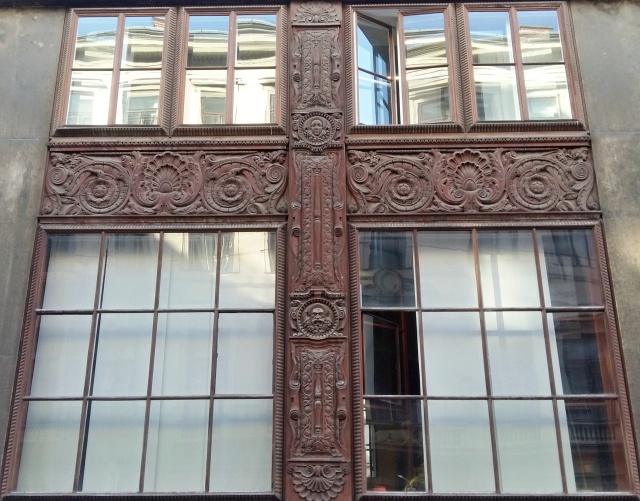 This clinker-brick building has tiny balconies with steel railings in front of French windows with semi-circular shapes on the third and fourth floors. Because of its lack of ornamentation, it can be seen as an illustration of the 1908 essay ‘Ornament and Crime’ by Adolf Loos.

The ribbed-brick cover of the upper floor, the decorative stripe of the second floor and the ornamentation of the bay windows allude to Art Deco.

This building has Neoclassical ornamentation but also manages to evoke the more modern structure located on Mester utca 18.

9. Apartment building on Munkas utca 3/a

This building is a good example of a Modernist interpretation of traditional motifs. The enlarged and grotesque ornamentation of the villa suggest the Baroque movement within Art Deco. 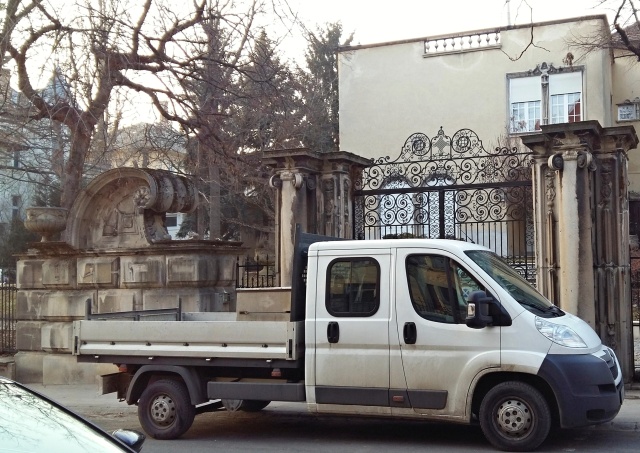 The sophisticated design of the home of broker Istvan Austerlitz follows the Baroque Art Deco style. The building is especially noteworthy for the decoratively framed pair of windows of the upper floor and for its entrance door. 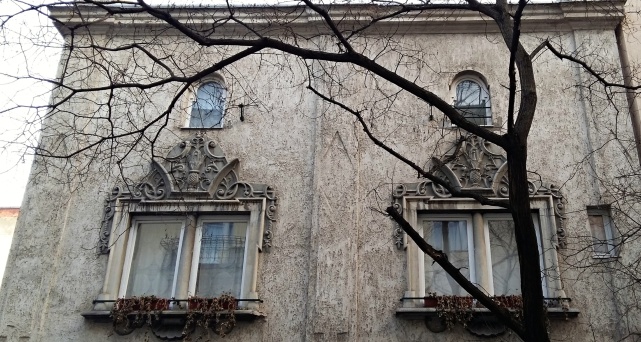 This French-influenced building was constructed for officers of factories and public institutions and consisted of single-room apartments. A verse referring to the territory lost by the Treaty of Trianon was originally inscribed between the staircase windows.

This red-stucco building was the house of bank director Sándor Beretvás and is located on a sharply rising street. 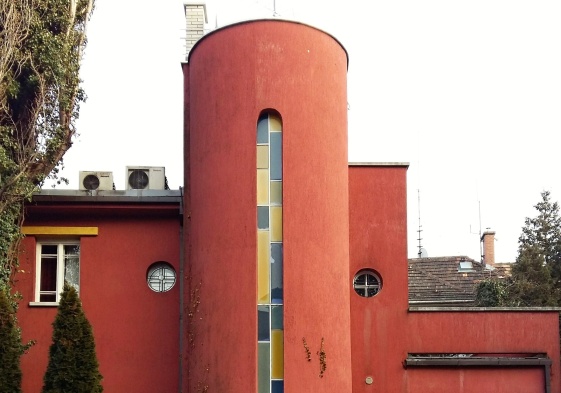 This massive building has an imposing portal and a balcony running the entire length of the second floor. The light-coloured plaster of the highest floor forms a contrast with the brick cladding of the rest of the façade. The details are Historicist, the unplastered bricks and windows refer to Art Deco.

This red-brick building has impressive bannisters on the balconies. 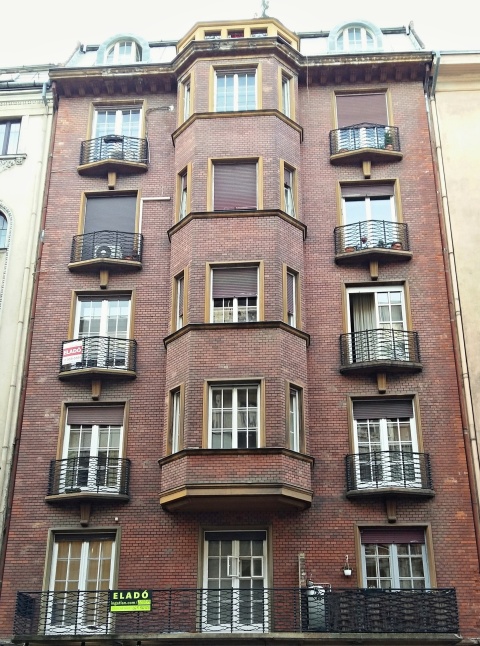 16. Apartment building of the Electric Works

The details of this building can be compared to those of the transformer station on Markó utca.

The house of lawyer Béla Fejes is one of the most obviously Art Deco houses in Budapest. The broken pediment of the avant-corps, the triangle-shaped balcony and the theatrical entrance all allude to Art Deco. The decor above the entrance is an allegory of nature. Symbols of night and daylight are displayed along the window of the staircase. It was uncommon for the façades of private homes to display sculptural ornamentation at the time. 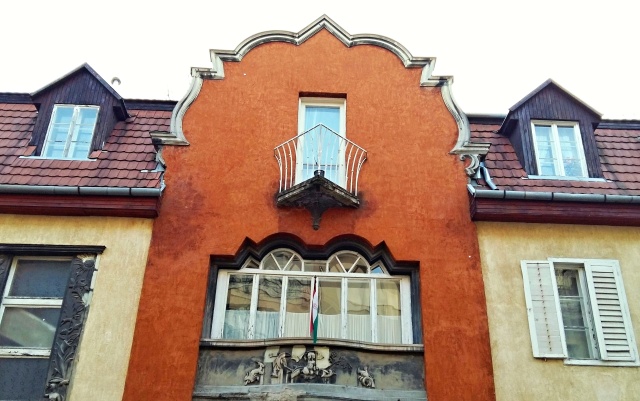