Below I will introduce some of the most notable blocks of New Belgrade.

Block 2 was among the earlier blocks to be completed. It served as a training ground for experiments with construction technologies and architectural designs.

The tower-looking building at the corner of Bulevar Nikole Tesle and Goce Delčeva is the most visible structure of the Block 9A when approached from the direction of Hotel Jugoslavija.

Building at the junction of Bulevar Nikole Tesle & Goce Delčeva, Block 9A

A building of Blok 11B across the street from Hotel Jugoslavija is covered by interesting pyramidal panels and some artworks.

The most prominent structure on the western side of the Block 11C is the Shopping Center ‘Novi Beograd’ (now known as the ‘Old Mercator’). Most of its façade is made of glass, while the entrance stairs are a good example of Brutalism. I haven’t been able to find any information about this building, but I have seen a photo of its interior, where the criss-crossing stairs look a bit like those in the central bus station of Tel Aviv. 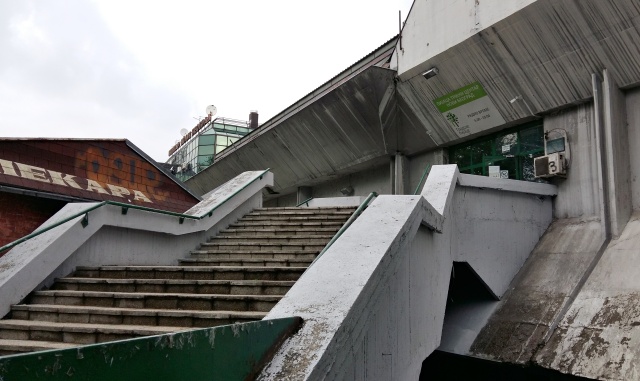 Block 23 is one of the most monumental in New Belgrade. Its most outstanding features include two structures spanning more than a half of the long side of the block and three high residential towers in its south corner. 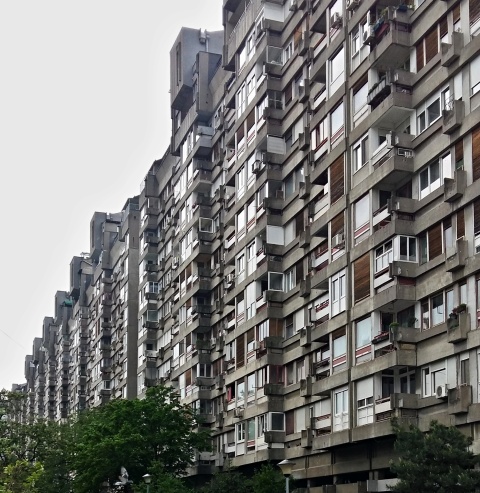 Block 28 is one of the better known blocks, thanks to the concrete frames reminiscent of TV screens surrounding the windows of one of its buildings (commonly known as the Televizorka). Like many other blocks, it was made up exclusively of prefabricated concrete elements. 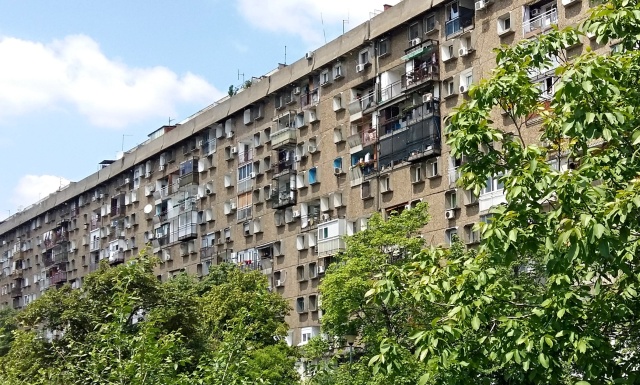 Another remarkable structure in Block 28 is the Slavuj Kindergarten (by Stanko Kristl).

The red bricks of the balconies and the roof parapets offer some polychromy among the dominating grey of the exposed concrete.

One of the buildings of Block 29 along Bulevar Zorana Đinđića

Block 30 consists of two ultra-long residential buildings stretched along the main boulevards and a number of smaller structures. It was conceived as a high-standard housing estate, but was eventually executed as a social housing project. The concrete used for the construction of the block was produced on the spot. The light-coloured façades are relatively well preserved.

These blocks stand on the site of the old village of Bežanija, which is why they are called the Bežanija Blocks. Many apartments here were owned by the Yugoslav People’s Army, which is why these blocks are also colloquially known as the Officers’ Blocks.

These blocks are, all together, the most imposing among the blokovi of New Belgrade. The buildings are made up of units of different heights, raising from 4 to 20 floors, which gives them a more dramatic look than the other residential blocks in the city. All the constructive elements were prefabricated. The panels used for the façades were as high as the entire height of the floor and contained openings for the windows.

Buildings of Block 62 as seen from Evropska

Buildings of Block 62 as seen from Jurija Gagarina