A huge city beach, facing a wide expanse of the Mediterranean Sea to the west; some of the most beautiful sunsets that one ever sees 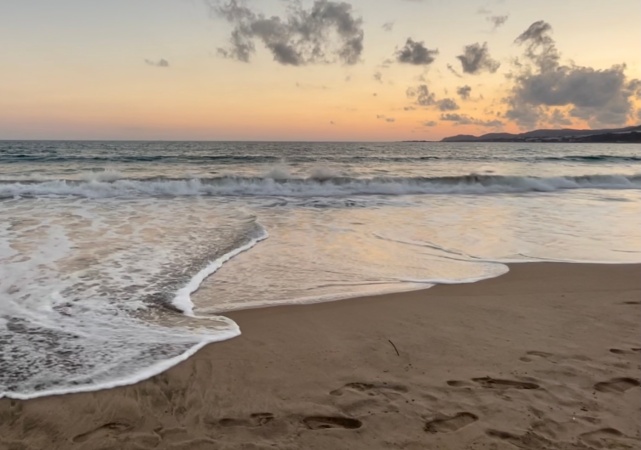 A village with an authentic feel, handles tourism better than the other villages along the ferry route on the southwest coast of Crete; one of the most laid-back beaches on the island, enjoyed by locals and visitors, families, groups of friends, couples and singles, and campers, hippies, naturists and gays, all from different generations, in mutual tolerance; never overcrowded; a hidden cove in the shelter of a cave to the east 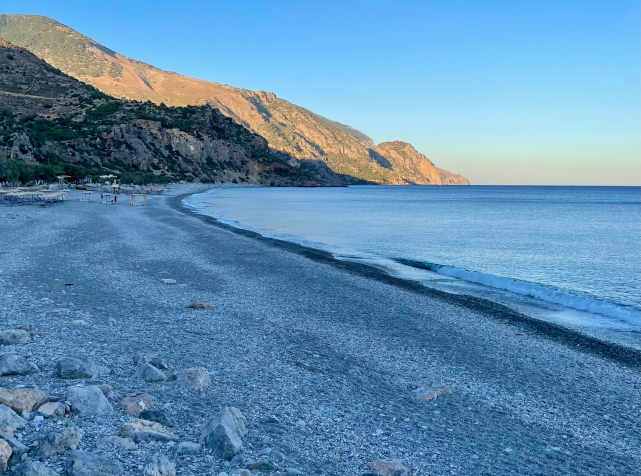 4 km southwest of Sougia, south of the archeological site of Lissos

A hidden beach near the ruins of the Greco-Roman town of Lissos; visited by occasional hikers and tourists on boats from Sougia, otherwise empty 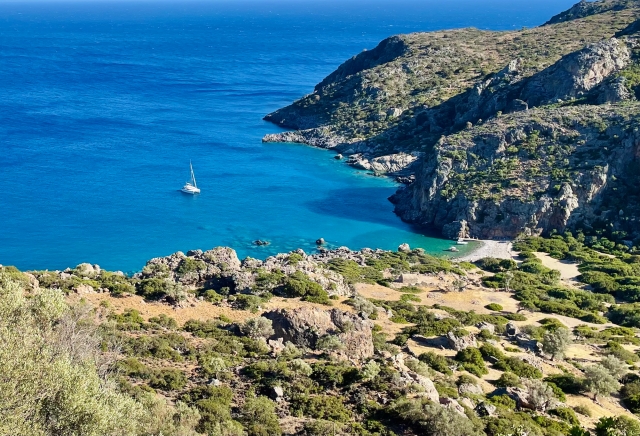 East of the main beach of Agia Roumeli

A godsend after the long Samaria Gorge hike, just like the busier main beach of Agia Roumeli; campers’ tents and hammocks under the trees; some goats; big pebbles

A tiny Byzantine church on the beach, built in honour of Saint Paul, who is believed to have stopped here on his journey to Rome; a scenic hike along the coast far away from the civilization; feels like the end of the world; one can expect one or two middle-aged couples of German naturists at the end of the world; dangerous waves and coarse dark sand that will burn your soles 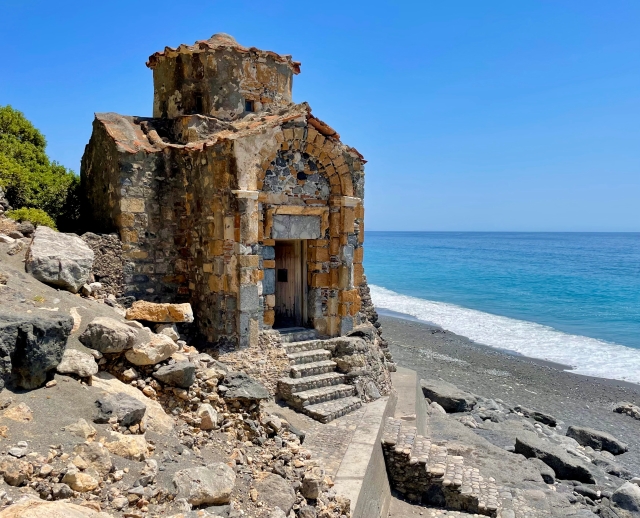 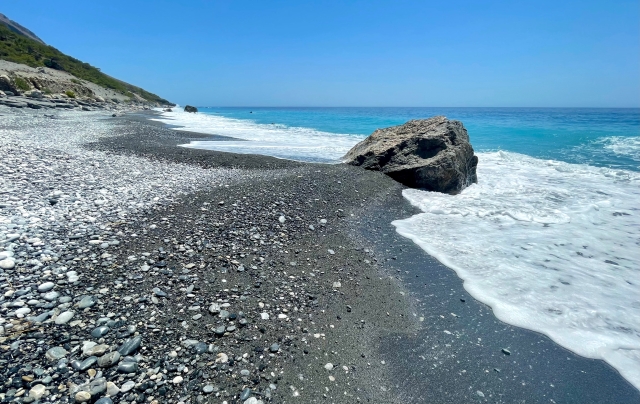 The first beaches east of Loutro following a narrow path on the mountainside along the coast; occasional hikers and perhaps some tourists staying Loutro looking for seclusion; rocks, pebbles and clear water

Immediately east of the Perivolakia beach

A small secluded bay with a pebble beach on the path between Loutro and the Glyka Nera beach; hardly any visitors, except for some hikers and lonely naturists looking for shade behind large rocks

The pearl of the Libyan Sea; a landscape reduced to the fundamentals: a dramatic descent of the southernmost slopes of the White Mountains towards the sea, a few meters of a pebble beach with some tamarisks, and various shades of blue of the sea; springs of fresh water opening up right on the beach; a difficult hike to access and occasional tourist boats in the summer 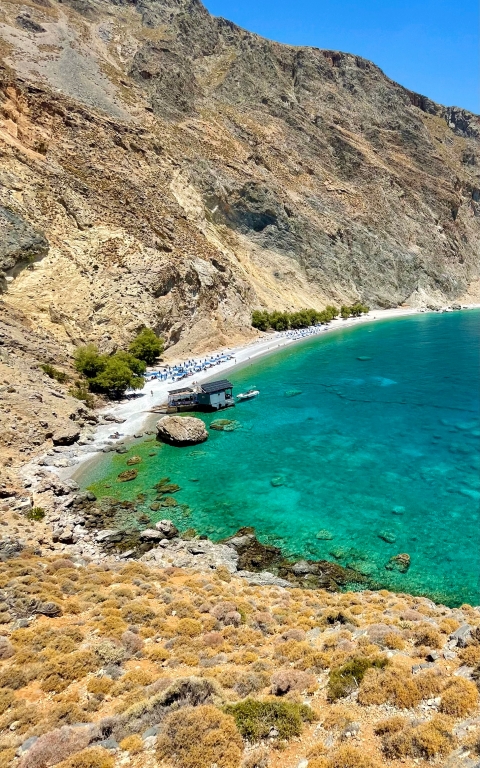 A laid-back beach a short walk away from Chora Sfakion; a wide expanse of the deep blue of the Libyan Sea; crystal clear water and huge caves opening right to the beach; a hidden cove an easy swim away to the east; the beach of preference of the locals 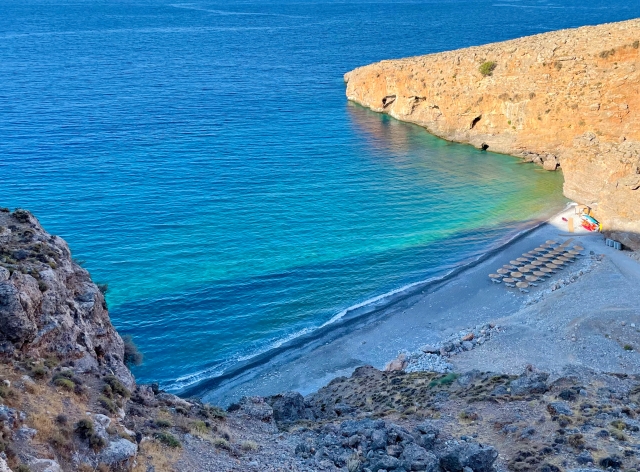 South of the Frangokastello Fortress

A sand beach dominated by a medieval Venetian fortress; a procession of ‘dew shadows’ (drosoulites), believed to be the ghosts of unburied Greek warriors who defended the fortress against the Ottomans in 1828, appearing early morning for some days in late May; strong meltemi winds that move even sturdy chairs and tables in beach bars during summer months; a beach popular with families and school groups; serious no-nonsense old men; the Wild West of Crete

A quiet beach with high dunes and clear water a short walk away from Frangokastello; strong afternoon winds that create no big waves but splash water from the surface against your face like a friend teasing; the eastern part frequented by naturists

A few hundred meters east of the Orthi Ammos beach

The easternmost end of the Orthi Ammos beach, access to which requires some climbing on stones and walk in knee-deep water under the surveillance of some goats; a curtain of white cliffs like a miniature Dover and sandy coves with shallow crystal clear water; a real gem unknown to most, perfect for skinny dipping and taking naked photos 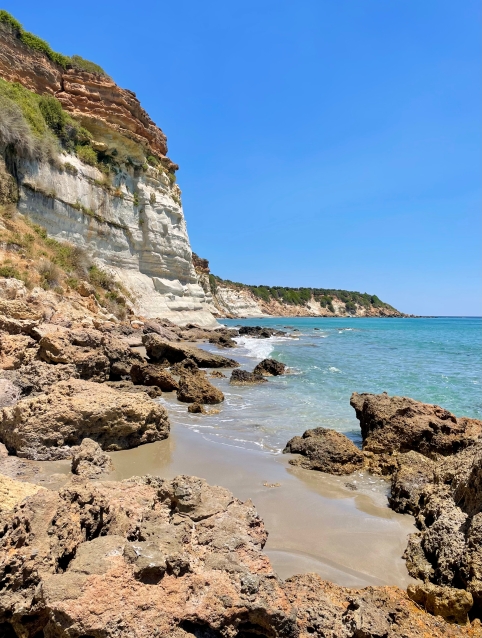